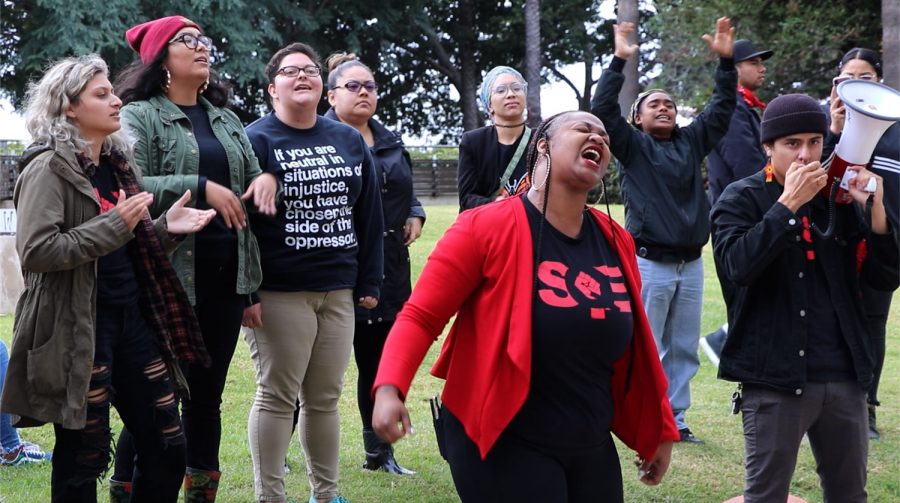 On Nov. 20, students from multiple CSU campuses protested outside the CSU Chancellor’s Office in Long Beach against the implementation of the quantitative reasoning requirement for freshman admission to the California State University System.

The CSU board of trustees was originally scheduled to vote for the new requirement but decided to push it back to the beginning of January 2020. Some protesters believe this wasn’t a coincidence seeing as the vote would take place during a time when students are less likely to rally.

“What this requirement does is going to hinder access for black and brown students so we’re trying to bring awareness to that.” Sarah Sandoval said, a Cal Poly Pomona student. Most of the protesters, including Sandoval, are a part of a statewide CSU campus organization known as Students for Quality Education.

The quantitive reasoning implementation would require “applicants, starting with the freshman class of 2026, to take one more year of quantitative reasoning to be considered for CSU admission, in addition to the existing requirement of three mathematics courses in algebra I, geometry and algebra II or higher,” according to Inside Higher Ed.

Critics say high schools in unserved areas lack many of the courses that would be needed to fulfill the requirements which would disadvantage students in these schools forcing them to take more mathematics or science courses.

Even though the vote was postponed, about 40 students dressed in rain ponchos, banging on bucket drums, and holding protest signs and megaphones marched in a ring outside the building.

The students were held off by police officers and security guards allowing only a few students at a time to the board meeting. Although some of them had signed up to speak to address officials directly and were supposed to be given each 3 minutes to do so, the meeting was coming to an end without room for a public hearing.

They also expressed other concerns like stopping president salary increases as there are homeless students who cannot afford meals and there is a need for more mental health services for students.

After the protesters exited the meeting hall and reunited with the rest of the group outside, Lateefah Simon, a member of the CSU Board of Trustee, addressed the crowd stating “not only do I get it, I actually encourage us to, throughout the state, be more organized, to be louder.” She thanked everyone who came to the rally, for standing up and speaking about the profound effect when people come together.

“When you come and put your body on the line for something so important, the human right of education, we listen,” Simon said.

Editor’s Note Nov. 21: A CSU Board of Trustee’s member was quoted under the wrong name. The correct name is Lateefah Simon.