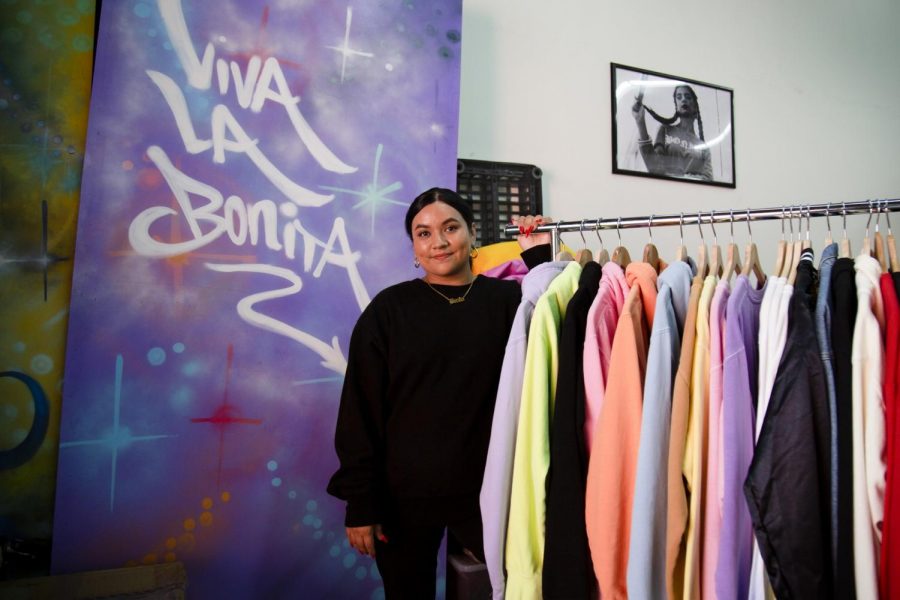 Rachel Gomez stands by a rack of her clothing in her Viva La Bonita warehouse in San Fernando on Nov. 15. Photo credit: Shae Hammond

This is why Gomez decided to create her own brand in the hopes of closing this culture gap. She came up with the idea of a streetwear clothing brand called Viva La Bonita, a line where Latinas feel comfortable in their own skin and identity.

“The idea of Viva La Bonita is a brand that encourages you to be proud of yourself, doesn’t matter where you come from or what your story is or what you’ve gone through,” Gomez said.

The idea of the line began in 2012, but Viva La Bonita’s path to success was rocky. Gomez worked over 50 hours a week at a Tillys in Burbank. She couldn’t quit her retail job at the time because it financially supported her family, and she was the only member who had a well-paying job.

During her days off or after work, she’d work on the Viva La Bonita brand regardless of how tired she was. Initially, she had difficulties connecting with the community. Almost three years into the brand, she would post every day on social media and wouldn’t have a single sale. Gomez doubted herself, but the support of her fiancé, Fredo Tovar, her family, and her purpose of the brand kept her going. She knew it wasn’t going to be an easy path, but she persisted, and from day one Tovar has believed in and supported her efforts.

Once Gomez had a better understanding of her brand’s direction, she was able to explain it her grandmother thoroughly. This led to her grandmother to fully understand and support her granddaughter; Sanchez Duran even wore a pink tie-dye shirt from the brand in a recent Instagram story Gomez posted on Nov. 17.

Family plays a big part when it comes to her brand. Gomez grew up speaking Spanglish, where English and Spanish words are combined, which was how her grandfather Pedro Duran spoke, too. She implements Spanglish quotes into the brand, like “Mujeres are magic,” “Be The Cabrona Que No Se Dejo” and “Allergic to Pendejadas,” which led women to connect with the brand.

“Because of the authenticity of these quotes and how organic, women started to connect to the brand even more,” Gomez said.

Viva La Bonita currently has more than 200,000 followers on Instagram, and the follower count continues to grow as the brand becomes more well known.

Gomez feels the journey has been long, and mistakes have guided her to figure out the brand as it is today. She envisions the brand’s continued growth within the next five years and traveling more with their pop-ups within the U.S. She wants to leave a legacy for people to go after their dreams and support one another in unveiling their magic.

“We were put here to live our life. Don’t live life like it’s permanent because life is temporary and we are only here for a certain amount of time,” Gomez said. “Help people along the way and encourage someone to believe in their magic.”