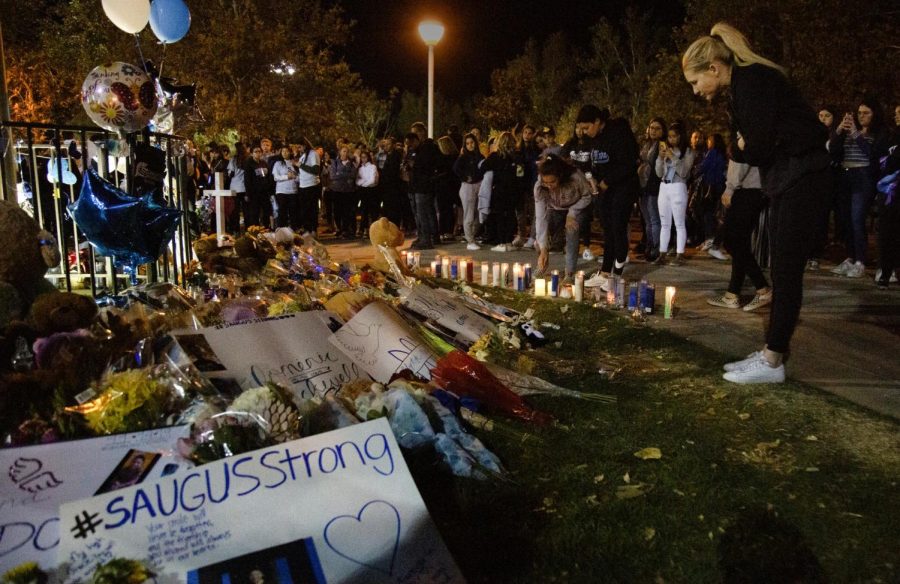 Students gather around the memorial, which circled around the flagpole, on Nov. 17 at Central Park in Saugus to place candles and other memorabilia in support of the community and the deceased after the shooting two days prior. Photo credit: Shae Hammond

Thousands of Santa Clarita residents gathered at Central Park on Nov. 17 to honor the lives lost at the Saugus High School shooting, which took place on Nov. 14.

Blue lights hung from necklaces against shirts that read “Saugus Strong,” and numerous speakers took the stage to extend their condolences to the victims’ families and to help heal a mourning community.

“I want my first public words, that I know will be far too inadequate, to be heard by my students and my staff … Tonight, the most important part of truly being Saugus Strong is to grieve together,” said Saugus High School Principal Vince Ferry. This was Ferry’s first public statement since the shooting occurred.

Fifteen-year-old Gracie Anne Muelhberger and 14-year-old Dominic Blackwell were shot by Nathaniel Berhow on the morning of Nov. 14, Berhow’s 16th birthday. Three other students suffered injuries and have since been released from the hospital; they are expected to make a full recovery. Berhow succumbed to a self-inflicted gunshot wound on Nov. 15.

Among the speakers were Blackwell’s uncle, Chris Blackwell, and friend, Emma Bartel, who said that “It will be a long, painful walk to class without him on Dec. 2.”

Another speaker at the vigil was Muelhberger’s older brother, Riley. His parents wrote a statement, which was read by two family friends, sharing about their daughter’s life. Muelhberger’s best friend, Addison Koegle, could not make it to the vigil as she was recovering from two gunshot wounds, but a recording of her speech was played.

Attendees were able to set flowers and signs at the base of the flagpole, where two crosses were placed with the names of the two victims.

“Through our tears, our hugs, our words of kindness, our remembrances of Gracie and Dominic, we will become stronger,” Ferry said. “Strength is not the withholding of tears or the waving off of pain. Strength is the ability to welcome our tears in the midst of pain.”