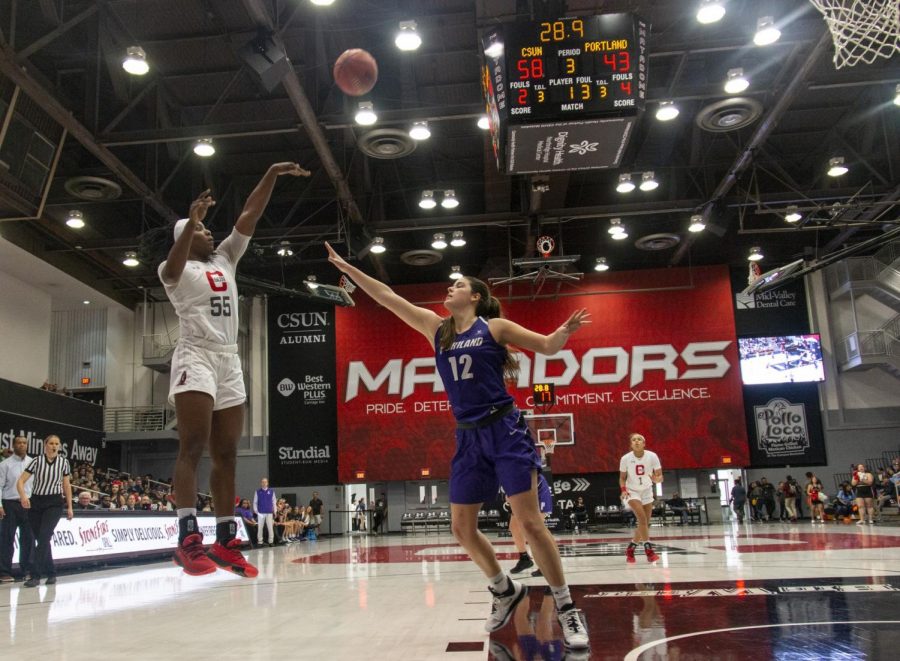 Forward De'Jionae Calloway (55) pulls up for a jump shot against the University of Portland Pilots on Nov. 21. Calloway was CSUN's top scorer with a career-high 27 points, as well as 10 rebounds. Photo credit: Logan Bik

The Matadors had their biggest crowd in program history during their game against the University of Portland on Nov. 21. The attendance was at 1,606 fans, which beat the previous record of 1,218. It was Kids Day and there were a lot of schools from around the area that came to watch.

“In the first half, I thought we executed on offense and we made shots,” head coach Jason Flowers said.

The Matadors responded with a 7-1 run to give themselves a 56-33 at the third quarter media timeout. Portland went out on a 13-3 run that cut the lead to 59-46 at the end of the third quarter.

Jackson and Calloway scored the first four points of the last quarter to put the Matadors up by 17. Portland freshman Alex Fowler scored six of the next 10 points for the Pilots to cut the Matadors’ lead to 63-56 with 4:06 left to play in regulation.

Calloway ended the Matador scoring drought with a layup before Portland junior Maddie Muhlheim answered with a three of her own to make the Matadors’ lead 65-59 with a little over three minutes left to play in the game. A three point play by Calloway made with a three possession game for the Matadors with 2:38 left to play.

Next time down, Fowler was fouled for the Pilots and she made both free throws. Calloway answered with a layup. Portland freshman Keeley Frawley hit a 3-pointer with 61 seconds left in the game to make the Matadors’ lead 70-64.

Matador junior guard Meghann Henderson was fouled after she grabbed the rebound and hit two free throws to push the lead to 72-64 with 45 seconds left to play. Eleven seconds later, Fowler was fouled and she missed both of her free throws. Jackson ended up with the ball. She hit one out of two for 73-64 win.

Calloway recorded her second career triple-double with a career-high 27 points and 10 rebounds. Henderson scored 12 while Jackson had 11. Redshirt freshman Daniela Popa had a season-high 10 points off of the bench for the Matadors. Fowler led the Pilots with 27 points to go along with nine rebounds. She shot 10-for-13 from the field, while Frawley added 10 points for the Pilots.

Although the Matadors got a little complacent with their lead in the last quarter, they were able to make plays down the stretch to win the game. The Matadors were able to hit their free throws at the end of the game.

“This first win is good for the kids,” said Flowers. “They have been fighting through some things because obviously we are still not at full strength at the moment.”

The Pilots came into the game with a 4-0 record. The Matadors were able to take away what the Pilots do best in order to help them win. Ball security was a problem down the stretch for the Matadors but they were able to pick up the victory in the end.

“It doesn’t matter who we play against or what their record is, it just matters about how we play and what we do on a daily basis,” said Flowers.

The Matadors showed a lot of passion during the game. They showed that their record does not define who they are.

“I like that we showed growth from the last couple of games and we pushed through even when we were tired,” Calloway said.

In order to play like this every game, the Matadors have to keep going hard in practice. They showed that they can beat anybody.

“It really was just being tired of our record and tired of needing to know that we had to make a change so today was that day,” Calloway said.

The Matadors lost the following game 71-61 against the Washington State Cougars on Nov. 24. The team will return home on Dec. 7 to face the UCLA Bruins at 4 p.m.