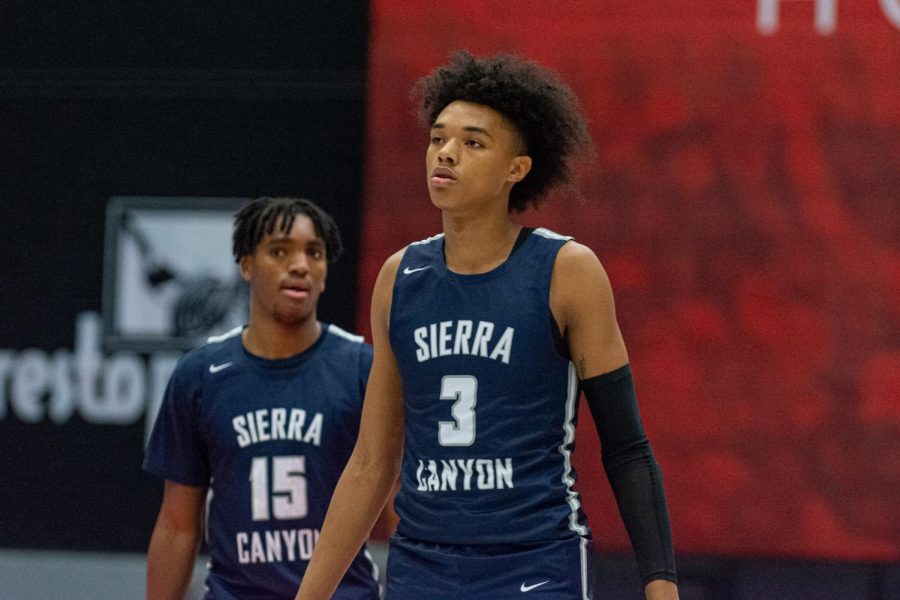 BJ Boston (3) and Terren Frank (15) are both seniors at Sierra Canyon School. Boston is ranked as the No. 9 senior in the nation and is committed to Kentucky, while Frank is committed to Texas Christian University. Photo credit: Joshua Pacheco

Sierra Canyon has been the talk of Southern California high school hoops lately, and for good reason. It’s not too often you see a team that has a pair of top-10 ranked seniors in the country in BJ Boston and Ziaire Williams, the No. 6 ranked player in the class of 2020 in sophomore guard Amari Bailey, and not to mention senior Zaire Wade and freshman Bronny James, the sons of NBA superstars Dwyane Wade and LeBron James, respectively.

The Trailblazers ran through everything in their path so far this season, outscoring their first five opponents by an average of 27.2 points. They have 15 nationally-televised games scheduled this season, more than six NBA teams. The hype around the Trailblazers has been so real, tickets for their home opener on Tuesday against Granada Hills Charter sold out in 32 minutes.

Despite all the noise and attention that surrounds them, the team hasn’t forgotten to keep things in perspective.

“We still know that we’re kids and we still just have fun with each other,” Bailey said. “We’re not really worried about the cameras.”

It was all the hype and attention that brought Sierra Canyon to the Matadome for their second home game of the season as they hosted the Santa Clarita Christian Cardinals (SCCS) on Wednesday night. The Trailblazers would soundly defeat the Cardinals 72-54 in front of a crowd of 1,550, though not without some early game drama.

Senior Terren Frank got the first points of the game on the board via the free throw line, and Bailey followed soon after with a layup to give the Trailblazers an early 3-0 lead. Santa Clarita, though, sent a message that they were not scared of the No. 3 team in the nation by going on a 9-0 run led by their trio of Josh O’Garro, Kaleb Lowery and Ty Harper.

The Cardinals would feed off the energy from their run on both sides of the court and finished the first quarter with a 16-11 lead over the Trailblazers.

Sierra Canyon would slowly claw their way back in the second quarter, led by Bailey who had a team-high 14 points in the first half. After throwing down a monster putback to tie the game at 20, he would drain both free throws to put the Trailblazers up 22-20 with 3:22 left in the half, their first lead since the opening minute.

Harper would once again get hot from beyond the arc, though. He scored nine consecutive points for the Cardinals, all from deep, to take the lead back for SCCS with less than a minute to go in the first half.

Bailey, and the Trailblazers, knew going into the game that Harper would be a problem for them. The team knew that in order to win this matchup, they would have to slow down No. 10.

Although Sierra Canyon was able to reclaim a 30-29 lead just before the end of the first half on a putback from 7-foot-3-inch center Harold Yu, they knew that first half wasn’t good enough.

“Our coach told us we were bullshitting in the first half,” Boston said. “So we just had to pick it up and keep going.”

Boston took head coach Andre Chevalier’s challenge to heart, and played a major role in Sierra Canyon’s third quarter explosion. Thirteen of his 19 points came in the third quarter after having just two points in the first half. After holding onto a one-point lead at the half, the Trailblazers were suddenly up by 20 heading into the fourth quarter.

“I feel like I work on my shot every day,” Boston said. “So just keep shooting out of the slump, they’ll be falling down.”

It would be Boston who would hit the final nail in the Cardinals’ coffin in the form of a free throw to secure a 72-54 victory for the Trailblazers.

Bailey led Sierra Canyon in scoring with 23 points, although Harper had a game-high 28 points. Bronny James had six points off two three-pointers, while Wade did not play due to a high ankle sprain that is expected to keep him sidelined for 2-4 weeks.

Sierra Canyon improves to 6-0 and will travel to Arizona to take on Millennium High School on Dec. 7. They will play one more game at the Matadome this season on Jan. 23 against Gold Coast league rival Windward.