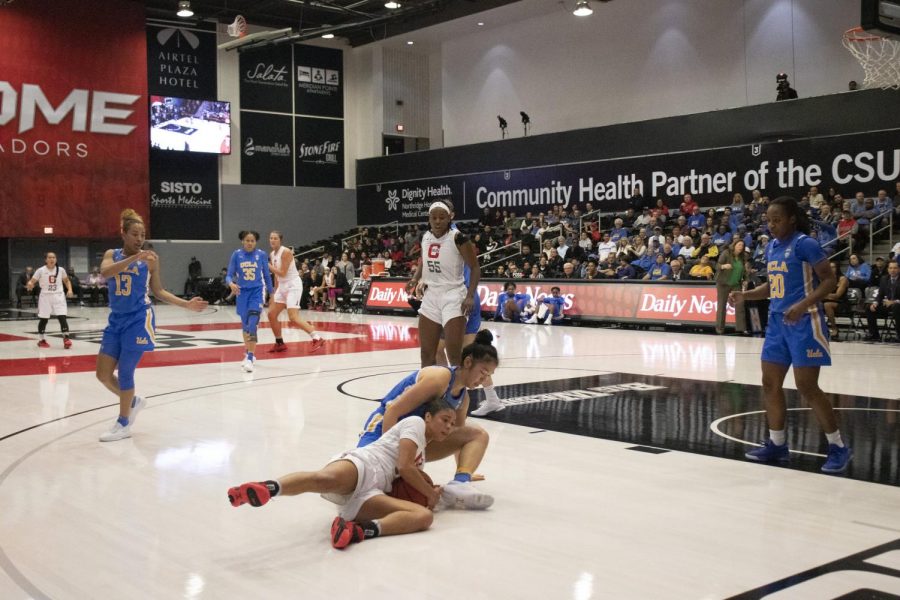 Sophomore guard Jordyn Jackson falls as she protects the ball from the UCLA Bruins on Dec. 7. Photo credit: Alexis Amezcua

Head coach Jason Flowers played for the UCLA Bruins from 1999-2001 before he began his coaching career, leading him to CSUN for the 2010-2011 season. Only once had he played his alma mater since taking the job with the women’s basketball team. This was in 2012 when CSUN defeated UCLA at Pauley Pavilion in a 66-72 upset of the then-No. 12 Bruins.

Prior to Saturday’s game, the Matadors had gone 1-9 against the Bruins between 1975 and 2013. Unlike the last time they faced off against each other, this game was played at the Matadome in front of a majority of UCLA fans.

“It’s a good challenge,” Flowers said. “Obviously both times that we’ve played them, they have been in the top 15 in the country. It’s a really good measuring stick for us to see where we are and what we are capable of. Playing against UCLA is always a challenge, it’s a challenge that we encourage, and we look forward to. Hopefully, these are the types of games that our kids come here for.”

CSUN won the tip but after their opening bucket, they struggled as they committed four turnovers and the Bruins went on a 6-0 run. With 4:54 left in the first quarter, senior De’Jionae Calloway stopped the bleeding. Calloway provided the majority of the offense for the Matadors by the end of the frame.

The Bruins led 16-6 at the end of the quarter as Calloway had four points and four rebounds.

The struggle continued into the second quarter as the Matadors couldn’t convert on their offensive opportunities and weren’t rebounding as much as they should have. They couldn’t contain the fast-paced Bruins.

Calloway and freshman Deja Williams had four points apiece while Calloway led the team in rebounds with seven.

The second half started differently than the first as the Matadors were able to stop the Bruins on defense and had cut down the lead to single digits. CSUN took advantage of the UCLA mistakes while the Bruins were getting sloppy on both ends of the floor.

“We’ve been using the analogy of either being a lion or a gazelle,” Calloway said about the halftime speech from Flowers. “We wanted to come out being the hunter and not the hunted. Attacking from the beginning of the second half.”

The Bruins were able to pick up the pace and put the game back to double digits as freshman Charisma Osborne shot a buzzer-beating three-pointer to end the frame. UCLA led 42-29 to start the fourth quarter.

The second half surge for the Matadors wasn’t enough as the Bruins came away with the 58-44 win.

“I thought in the second half, our kids came out and they were much more aggressive and for us that’s big,” Flowers said. “It’s a big part of who we want to be and who we plan to be moving forward regardless of who we’re playing.”

Only two Matadors finished with double digits in points while one of them also had double figures in a different category. Sophomore Jordyn Jackson had 12 points in the game and Calloway led the Matadors with a double-double as she finished with 12 points and 12 rebounds.

Calloway’s mentality during this game was to do whatever she needed to on the court, she wasn’t thinking about the double-double that she recorded.

“It can’t be a little breakdown, just doing what I need to do every single time so that was my focus during the game,” Calloway said.

The double-double didn’t go unnoticed, though, as Flowers and the rest of the coaching staff expect that from her as she takes on a role that she hadn’t had before.

“We’re not surprised when it happens, we expect that kind of performance from (Calloway),” Flowers said. “She’s capable, I think she’s growing into the role of being that person on this team because she hasn’t had to yet in college and she’s definitely made strides in our first 10 games. We expect her to continue to make strides, get better and do even more as we move forward in our schedule.”

The Matadors will next host the Santa Clara Broncos at the Matadome on Dec. 18 at 5 p.m.