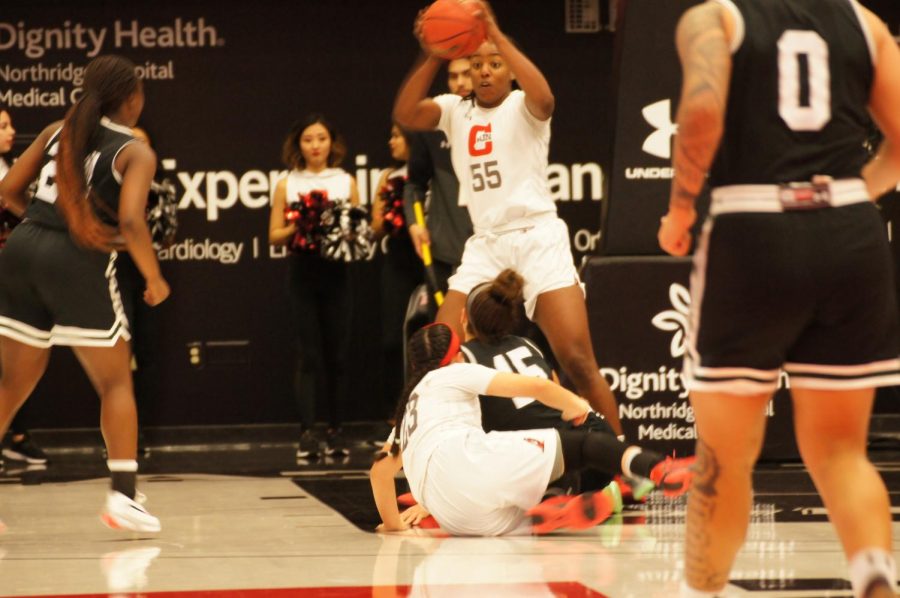 Hayley Tanabe passes the ball to De'Jionae Calloway after fighting for it on the floor during the home game against the University of Hawai'i Rainbow Wahine on Jan. 9. Photo credit: Bryanna Winner

After finishing non-conference play 5-9 at the end of 2019, the women’s basketball team started the new year with a 58-54 win over the University of Hawai’i Rainbow Wahine in the Big West opener.

This was the 21st time that the Matadors and Rainbow Wahine had ever played each other. Coming into the game they had played each other 20 times and the all-time series had been tied at 10 for each team. The Matador win gave them the 11-10 series lead.

Coming into the season, Hawaii was one of the top teams picked to win the Big West while CSUN was towards the bottom of the pack.

“It’s always good to start conference with a win, especially against a team that was a preseason pick to win this conference towards the top,” said head coach Jason Flowers.

The Rainbow Wahine outscored the Matadors 9-0 to close out the first quarter. Hawai’i went into the second quarter leading CSUN 16-9 and started the frame strong to lead 21-9.

When the Matadors were down 23-13, they went on a 9-0 run which would make the score 23-22. This was the first of two moments where CSUN would cut the Hawai’i lead down to two points. Hawai’i scored the last four points of the second quarter to go into halftime with a 32-26 lead.

Halfway through the third quarter, the Matadors were trailing 40-35 but went on a 6-1 run to tie the game up at 41 when redshirt senior De’Jionae Calloway hit a free-throw off of a three-point play. The Matadors took a 43-41 lead when sophomore Jordyn Jackson made a layup on a fastbreak with 1:28 left in the third quarter. This lead was their first since starting 2-0 in the first minute of the game.

At the beginning of the fourth quarter, both teams exchanged baskets and a three-pointer by Jackson gave the Matadors a 48-45 lead with 7:37 left to play in regulation. Freshman Deja Williams hit a three-pointer a few minutes later to give CSUN a 53-50 lead, which would put them ahead for the rest of the game.

A basket by junior Meghann Henderson was followed up by two free throws by Williams to push the Matador lead up to six with 2:12 to go in the game. In the last minute, Williams missed four free throws which kept Hawai’i’s hopes alive but it was not enough to stop CSUN from getting their first conference win.

“Coach broke things down and told us exactly what we needed to do, especially with me because he told me to stop being so selfless and passing the ball because shots for me are consistent,” Calloway said.

Calloway led all scorers with 22 points to go along with 12 rebounds, giving her five double-doubles on the season. On top of that, she added three blocks and shot 10-for-20 (50%) from the field for the game.

Henderson had 13 points and nine rebounds which tied her career-high in rebounds in a game. Henderson also added a game-high six assists. Williams recorded 10 points, two assists and two steals.

“I liked our defensive intensity and I feel like this was one of our best defensive efforts this season,” Calloway said.

The Matadors got off to a very slow start in the first half, but were able to change that, showing a lot of toughness and character in the game.

“If they did things the right way, they would get back into the game so they relied on each other,” Flowers said.

CSUN did not fold under pressure and when they were losing, they stayed calm and played their game.

“We just treated this like any other game and played together, even when the game was close or tied so that we would not let the team down,” Henderson said.