Keeping kids out of cages 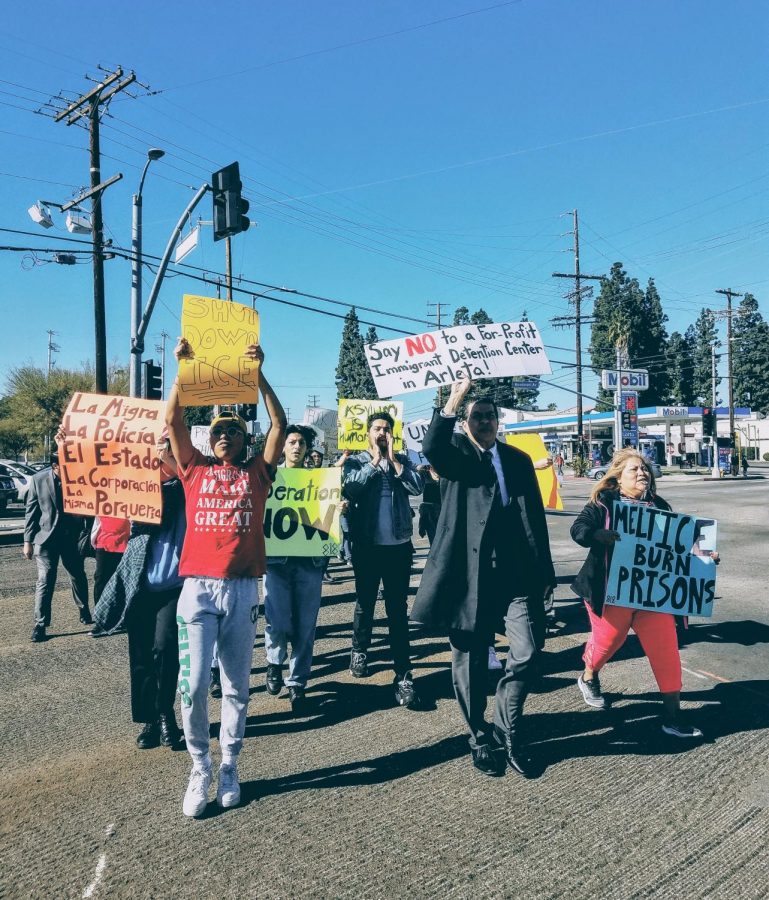 Protesters walk down Nordhoff Street and Woodman Avenue, crossroads in the city of Arleta, where VisionQuest is set to open a migrant children's detention center. Photo credit: Ivan Salinas

San Fernando Valley community members huddle wall to wall, willing to sit on the floor or stand in the hallways of a small human service agency in hopes of finding a solution that will put a stop to the looming fear of a migrant children’s center that could soon be placed in the heart of Arleta.

VisionQuest has proposed to locate their newest migrant children’s center at a vacant senior citizen center that sits on the corner of Woodman and Nordhoff surrounded by the busy shops in the neighborhood. According to Reveal, The Center for Investigative Reporting’s website, the vacant facility would house boys, exclusively, between the ages of 11 and 17, allocating space for 148 beds. VisionQuest received federal funding to open centers in Tucson, Arizona, Southern California, and San Antonio, Texas for detained children separated from their families at the U.S.-Mexico border back in July. This action is going around California’s new law that took effect on Jan. 1, 2020, which bans for-profit children’s detention centers by being a private non-profit company.

How the Community is Responding

There has been an outpouring of fear and protest from the San Fernando Valley community urging councilmembers and assembly members to put a stop to the project completely, comparing the center to a children’s prison. On Jan. 6 a protest led by the organization Justice For The Children brought the community together to send a message that Arleta refuses to be home to a children’s detention center.

“I live nearby and I’ve always lived here. I saw this being used as a senior citizen center and this whole community also already changing, but to hear that they’re going to put this detention center right within our community is a slap in the face,” said Araceli Herandez.

As a resident of Arleta, she explained that this is like a power move on a community that is nearly 70% Latino/a, and it makes them feel powerless or out of their control.

“It felt like I didn’t have control but I’m out here to protest and let them know we know they’re coming and we don’t want them to, we don’t want kids in cages,” said Hernandez.

Local teacher and member of United Teachers Los Angeles Rocio Lopez joined the protest to send a message of support to migrant children.

“I’m here to share the message to the children that are being detained that there are a majority of us that support them, love them and are here to fight for them,” said Lopez. “We are all human and we all deserve the right to be treated as humans, no child should be in a cage.”

A few days after the protest, a meeting was held at Pueblo y Salud, Inc., a social and human services agency that focuses on education, prevention, organizing, mobilizing and empowerment for the Latino community. The small space was packed with community members from local human rights organizations, CSUN students, assembly member and councilmember representatives and residents from across the Valley.

Peter Schey, an immigrants rights attorney and president of the Center for Human Rights and Constitutional Law, spoke during the meeting and answered questions from the community. Schey’s experience goes back to infamous cases such as Plyler v. Doe in 1982 that stopped Texas legislature from withholding funding for the education of undocumented children and worked the Flores Settlement, setting regulations for the treatment, conditions and time that migrant children are detained.

“They aren’t shelters, these are detention facilities and we should be very clear about that. Kids there aren’t free to leave, they’re in a miniature jail,” said Schey.

Under these detention centers children are not allowed to leave the premises, whether it be for school or go anywhere else outside the gates of the center. A shelter differs, allowing occupants to come and go, explained Schey. While migrant children centers should have schooling, health services and other regulation, it’s up to the company to make the decision on how it is run.

He explained to the audience that ICE isn’t the group in charge of detaining over 5,000 kids currently in detention centers, but instead is the Office of Refugee Resettlement, an agency that is part of the Health and Human Service of the Federal Government. ORR is in charge of reuniting migrant children with family members but has been spending millions of dollars making contracts with companies like VisionQuest that detain children because the ORR doesn’t run these facilities.

The company contracted and funded to open the migrant children’s center in Arleta is VisionQuest, a “national, comprehensive at-risk youth services organization, committed to provide highly successful intervention services to at-risk youth and their families, while adhering to the highest professional standards,” according to the company’s website. The founder Bob Burton created the program in 1973 designed around physical and wilderness survival skill activities to reform at-risk youth.

But, in more recent years, the long-time for-profit VisionQuest has been subject to financial debt, leading them to enter the non-profit business of migrant children’s centers, spurring public uproar due to their long history of mistreatment of children, according to Reveal. Here’s a list of a few of the allegation and cases against VisionQuest that Reveal reported:

Early practices used “confrontation circles” where “staff would circle around a child, yelling at them, and tackle them if they tried to escape.”

1994, 13 employees were fired over a two-year period in Pennsylvania for reasons of known or suspected abuse or physical harm.

2007, 187 kids ran away from a New Lisbon, New Jersey facility over just a three-month time period, where “state officials found the program relied on untrained temporary workers and kept children for longer than it should.”

2017, a Philadelphia facility was closed after city officials ended their contract when multiple cases of abuse surfaced from a state inspection.

In July, VisionQuest received $25 million in federal funding by ORR in four grants over three years to detain unaccompanied minors in centers to be located in California, Texas, Arizona and New Mexico. These grants followed a 2017 federal grant of $8.9 million for a long-term foster care program in Arizona and a 2018 grant of $8.5 million for a facility in Philadelphia both for migrant children, which “the latest federal grants promise to boost the company’s annual revenues — $28.6 million last year — by 30%, a game-changer for a company that has lost money each of the last two years,” according to Reveal.

Many cities such as San Antonio and Philadelphia have denied VisionQuest’s applications to open migrant children’s center. With Los Angeles being the company’s newest target, the LA City Council is already stepping in.

How Los Angeles Is Responding

On Oct. 9, 2019, Governor Gavin Newsom signed AB 32 which bans all private, for-profit prisons and detentions centers from entering or renewing contracts in the state of California as of Jan. 1, 2020. As reported by LAist, “Federal officials say the shelters are ‘state licensed residential centers’ legally administered by the Department of Health and Human Services and their network of private contractors.” VisionQuest is still funded by ORR under HHS to open up a facility in Southern California but LA City Councilmembers have introduced two motions to put a stop to the facility being built in Arleta.

The first motion adopted by the council was introduced by Councilman Herb Wesson in July that would be “amending city zoning codes to prohibit the construction and operation of private detention centers.” The second motion was introduced in November by Nury Martinez, Councilwoman for District 6 where Arleta is located. Through this motion, the Council is instructing Planning Department, Department of Building and Safety, and the City Attorney’s Office to create a report that would investigate if the planned site is even suitable for this facility.

Where the Community is Going From Here

Schey encouraged the community to organize to create the best solution to stop the migrant children’s center from being built under the terms of a detention center. He explained they had several options they needed to consider in order to move forward:

Refusing to let the facility be built anywhere in the city of Los Angeles, even though there is a risk of it being built somewhere else.

Granting permission for the facility to be built but under the terms of the community, (i.e. with shelter regulations allowing occupants to come and go outside of the facility).

All of these options would need the help and support of local councilmembers, assembly members and attorneys.

“I want to tell you something: We have a big crisis in the community. We have a lot of people that are undocumented. The saddest thing is that their children are 21 years old and they’re American citizens, but they can’t fix their parents’ immigration status,” said Saucedo. “We need to have a movement led by young people that are able to vote so we can approach our congress members. That way laws are changed.”

On the verge of tears she expressed, “I was going to retire by Feb. 1. I’m almost unable to walk. But please, keep up the fight.”

The organization Justice For The Children will continue to have meetings to discuss and move forward with solutions. If you are interested in attending meetings or would like more information, call (818) 837-2272.