Softball is back in the 2020 Olympics, but CSUN coach Tairia Flowers is all too familiar with the event 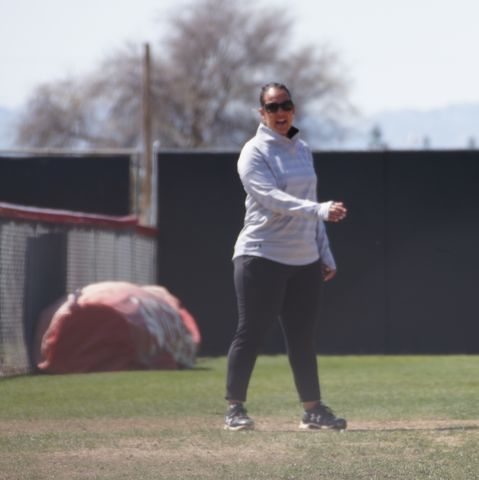 Tairia Flowers, head coach of the Matadors softball team since 2011, coaching at third base against UCLA on March 24, 2019. Photo credit: Bryanna Winner

2020 signals the start of a new year and decade, one that looks to be full of many events. One of those events is the Olympic Summer Games that will be held in Tokyo, Japan from July 24 to Aug. 9.

The 2020 Tokyo Games will see the debut of karate, sport climbing, surfing and skateboarding while two other sports are coming back for the first time since being removed following the 2008 Beijing Games.

Baseball and softball both return for the first time in 12 years, giving a select few athletes across the country an opportunity they haven’t had in over a decade.

For CSUN softball head coach Tairia Flowers, it will be her third experience with the Olympics after winning a gold medal as a player in 2004 and silver in 2008.

“I’m really excited for it,” Flowers said. “(Japan) love(s) softball … so it’s exciting to go somewhere where it would be like playing in the U.S. where you know people are there … except everyone there is rooting against us.”

Japan beat the U.S. 3-1 at the 2008 Beijing Games to win the gold medal while the U.S. received the silver medal. It marked the first and only time since softball debuted in the 1996 Olympics that the U.S. didn’t win gold. Softball and baseball were dropped by the International Olympic Committee for 2012 and 2016.

“Obviously, I want to go out on top,” said Flowers. “We don’t know if it’ll be back in the Olympics again for right now, but doing it in Tokyo would kind of be bittersweet.”

It is currently unknown whether baseball and softball will be seen at the 2024 Paris Olympics as neither were on the shortlist. The International Olympic Committee will vote on whether they will be included in the next Summer Olympics in Dec. 2020.

Unlike the prior two Olympics she competed in, Flowers will be participating this year as an assistant coach for Team USA.

“I don’t think it’s quite hit me yet since I’m still in CSUN mode and I’m not playing, but the opportunity for anyone to go to the Olympics even as a fan is just amazing because of the atmosphere,” Flowers said. “I can’t wait and I’m honored for the opportunity.”

Flowers was an assistant coach for the women’s national team last year as they were playing around the globe, including the Pan American Games and the USA Softball International Cup, finishing first in both.

As she looks to the upcoming Olympics, Flowers looks back at her favorite memories from the last two.

“Everything flew by. I think being with my teammates, we just had so many amazing people with us, even support staff; being in the (Olympic) Village and seeing other athletes, everybody who is at the top of their game; because you are almost like a fan seeing them walk around in the cafeteria or on campus,” Flowers said. “Getting to represent my country and knowing that we were at the top of our game, I think that was the coolest things.”

As the Olympics are coming closer, Flowers looks towards these Games and what she is excited to see.

“Just seeing the girls execute and compete,” she said. “I’ve been a part of coaching for a while, for a few years, and seeing some of these girls come and go, grow, and get better … I can’t wait to what they do when it comes to crunch time.”

Before each Olympic Games, the WNT tours across the country playing against all-star teams, collegiate teams and in tournaments. This year’s tour is called the “Stand Beside Her Tour,” named so to represent all women across the nation and empower them to work towards their dreams.

As part of the tour, the WNT will stop in Santee, California to take on CSUN and San Diego State on March 10. Flowers will start the night as the head coach for the Matadors and then switch teams against the Aztecs.

“I’m excited,” Flowers said. “I think that the (Matadors) are going to have some good energy and see their role models. We have nothing to lose, it’s go out there and do our best and let everything fall where they may.”

This is the first time that CSUN plays against the WNT and Flowers believes that this is an experience for her team to learn from their role models and be part of their Olympic journey.