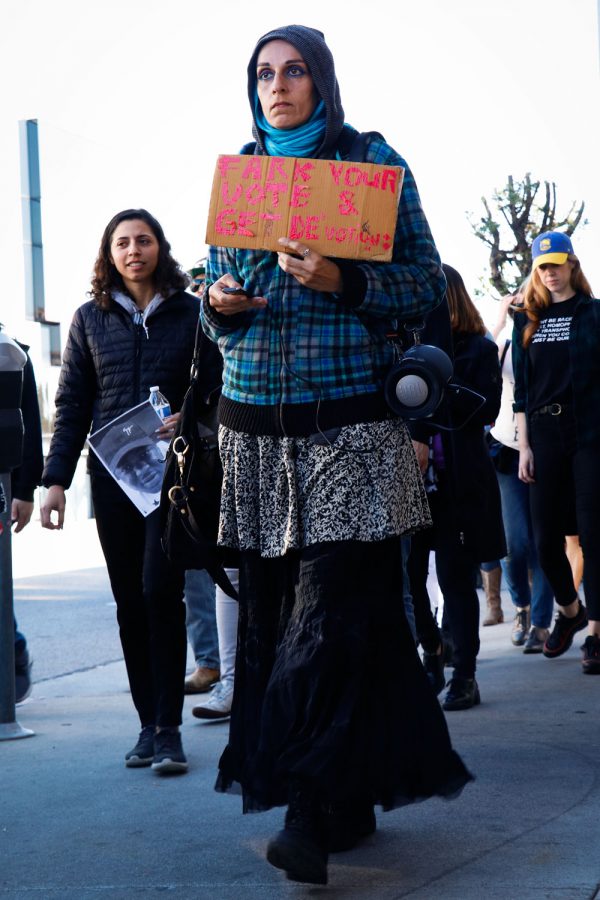 Southwest Asian and Northern African Los Angeles communities and other organizations gathered on Westwood Boulevard on Jan. 12 to protest the recent events in Iran and stand against war, the travel ban and sanction threats imposed by the U.S. government.

A Navajo speaker opened the event with a prayer for strength and unity, followed by a Black Lives Matter LA member, Joseph Williams, who explained how the events going on in Iran connect to the LA community.

Williams mentioned that a homeless man was killed earlier in the week by the Los Angeles Police Department, pointing out that government-funded armed forces are taking the lives of black and brown peoples in the streets of LA and in Iran. He called for the community to be aware of the issues and to see the connections and not see them as “single issues” that individuals face.

Following Williams, a SWANA LA member recited the names of the victims from the Ukrainian plane that was shot down on Jan. 8 after taking off from Tehran International Airport in Iran. Days following the incident, reports found that the plane was mistakenly shot down by the Iranian military, while the Iranian government blamed human error and denied any alleged cover-up of the accident. Thousands of people took to the streets of Tehran in protest and called for Iran’s supreme leader, Ayatollah Ali Khamenei, to resign.

The Ukrainian plane crash came days after the U.S. openly assassinated General Qasem Soleimani on Jan. 3. Since then, threats of war have surfaced as this is the first time since World War II that the U.S. has targeted a foreign military leader.

Isabel G., from SWANA LA, demanded an end to all economic sanctions imposed by the U.S. on Iran, attacks of war on Iran and travel bans. She said this was the first time a rally was created by and for SWANA community members to condemn U.S. imperialism and to bring awareness to issues within the community such as occupation, internal displacement and threats of war.

“SWANA is a decolonial way of saying Middle Eastern (Southwest Asian, North African),” Isabel said. “We don’t believe in borders, we believe in transnational solidarity movement within our people.”

Protesters chanted “The people united will never be defeated,” “Defeat U.S. imperialism, defend Iran,” “From Iraq to Palestine, occupation is a crime” as they marched toward the Federal Building. Bystanders yelled out in support and drivers honked their cars in solidarity.

Arturo Blas from Corriente Obrera, a small working class movement, said he was there to support the working class and the SWANA organizers.

“I’m an immigrant, so we see that right away Iranian immigrants are being attacked from the U.S. so this is very important because we have to put pressure on the U.S. government to stop attacking people here, and also we think that helps all the struggles going on in Iran and Iraq,“ said Blas.

As protesters gathered around the Federal Building, more speakers from the Palestinian Youth Movement, Middle Eastern and North African Socialists, and other organizations spoke, calling for solidarity among different ethnic groups and to stand against U.S. imperialism.

Hamoun Dolatshahi, a SWANA member and an Iranian-Kurdish immigrant, spoke in support of the Iran and Iraq working class protesters who are protesting back in Iran against the dictatorship.

Dolatshahi urged the crowd to support grassroots movements for democracy and to support each other in the fight against the intense policing of black and brown communities.

“They tried to bury us, but they did not know that we are seeds,” said Dolatshahi.