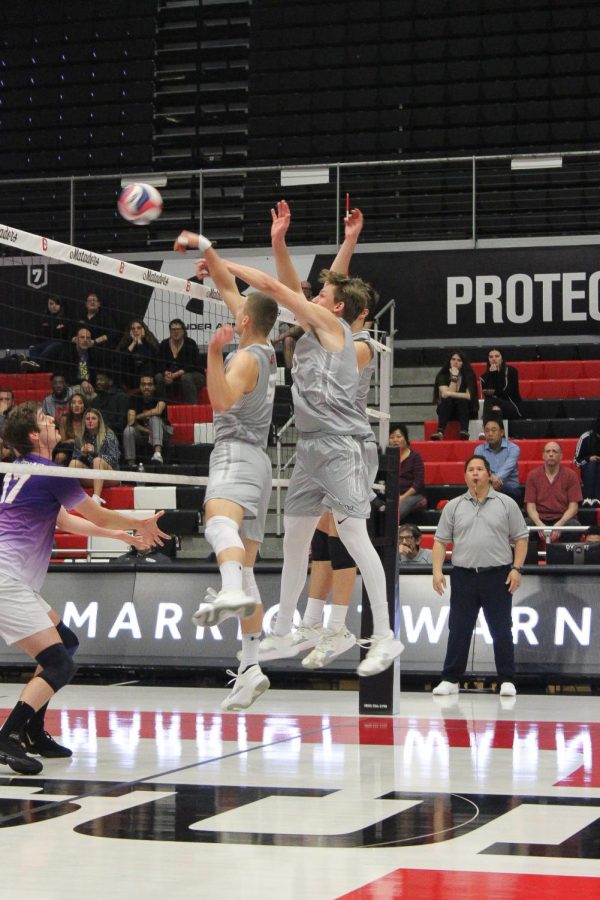 After losing three straight matches, the CSUN men’s volleyball team swept their exhibition match against the Cal Lutheran Kingsmen at the Matadome on Jan. 25. Prior to the matchup, the Matadors led the series against their Thousand Oaks neighbor 3-0.

CSUN (2-5) swept Cal Lutheran (5-3) by scores of 25-22, 25-18, and 25-19, marking the team’s first win at home this season while notching a season-high in hitting percentage and adding a season-high 13 aces that now ranks sixth in program history for a single match.

“The thing that we focus on out here is we have to pass, we have to serve. We had 13 aces and 14 errors, that is a great ratio and if you can do that, you are going to be competing,” said head coach Jeff Campbell. “Cal Lutheran was trading points but I think that was where we edged them out in serving and passing.”

The first set was a back-and-forth affair as they were going kill-for-kill and error-for-error. Both teams would take advantage of the other’s mistakes. The Matadors would be one point up on the Kingsmen until the set point.

The Matadors saw the set in their hand until Kingsman Justin Deitrich put them within two points. The set point was a kill by redshirt freshman Kyle Hobus to give CSUN the 1-0 lead.

In the second set, Cal Lutheran kept it close as they weren’t going down without a fight. The Kingsmen would come within one before the Matadors bring their lead back to two or three. The Kingsmen couldn’t keep up as the Matadors would pull away to a 25-18 set win.

“It’s important to keep everyone grounded and I just talked to a few of the guys to make sure we stayed consistent,” Campbell said. “We felt like we were the better team, we definitely wanted to show that but you have to be consistent and you’ve got to limit the ups and downs and limit the errors.”

The Matadors didn’t stop there as they continued on the 8-3 run by dialing up the pressure and taking advantage of the Kingsmen errors. Cal Lutheran would continue to fight as they wouldn’t give in so easily.

CSUN would finish the third and final set on a 20-11 run as redshirt junior middle blocker Philip Barker scored the final point on a kill. The Matadors would defeat the Kingsmen 25-19 in the final frame and win the match 3-0.

“Playing against smaller teams is always difficult because we usually have a tall block and today we really tried to emphasize on going over the net and sealing it,” said junior outside hitter Maciej Ptaszynski. “I think it worked out pretty well and we put a lot of emphasis this week on serving hard. We made a lot of mistakes but we had 13 aces. For 14 mistakes and 13 aces, that’s a pretty good balance.”

Wetter led both teams with 14 kills and an .824 hitting percentage while redshirt sophomore setter Taylor Ittner led all athletes with 35 assists and seven digs.

“I think Daniel Wetter is playing great volleyball right now, he is having a great season,” Ptaszynski said. “We are just working on the chemistry because we’ve been pretty shaky lately but we are trying to come together as a team and start from the beginning because we’ve had a couple losses this season and we are just trying to bounce back and just be better.”

“Our lineup right now, we’ve got to get better at serving, we’ve got to improve our offense, there’s a whole host of things we will be working on,” Campbell said. “We’ll be better next week, we’ll be ready for SC on Friday and we are excited for that opportunity.”