A new generation of poets on social media 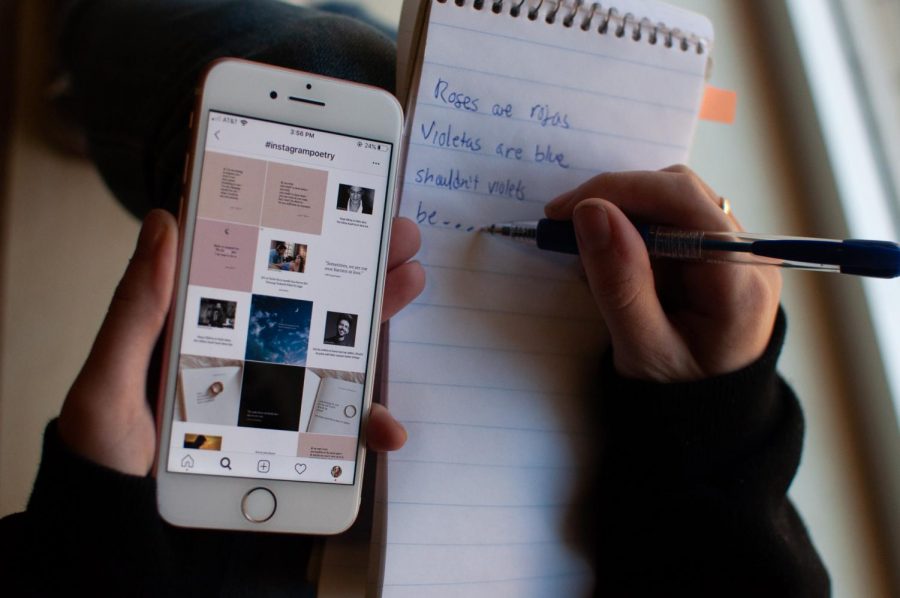 If you’ve been on social media long enough, it’s likely you’ve encountered a few lines of poetry. It may have popped up on your feed or a close friend shared it on their story. Millennials paved the way for digital literature as early as blog posts and fan-fiction to now posting poems and short fiction on social media. So, is poetry here to stay for the new generations?

A good indicator for this is just how many followers Instagram poets have amassed in the last couple of years. Most notably, Rupi Kaur has more than 3 million people reading her posts daily. In the Los Angeles area, poets and storytellers are abundant –– especially in a city that is home to influencers and celebrities. When looking through hashtags like #instagrampoetry or #lainstagrampoet, the screen is inundated with short texts in small squares, each featuring a signature style to differentiate their aesthetic accompanied by their words.

Elyse Hart is an Instagram poet from Los Angeles. Her account bio says “short instapoems, not so sweet (knife emoji).” Hart began writing poems during her childhood as a way to cope with her emotions. She went missing in action during her young adult years until just a year ago, once again out of a need to have an outlet for the emotions she was going through and having something that could keep her focused.

Her account @elysehartpoetry features her poems, many of them from the first person point of view, written in serif-font — literary editors’ preferred font — and identified by her heart logo on the bottom right corner of every post.

Her favorite writers range from Kurt Vonnegut to Dean Young, to Camille Guthrie to Charles Bukowski.

“Before I had my first poems published in literary publications, I began my poetry on Instagram so I could get some snippets out into the world,” Hart explained. “I believe in my art, I believe it is good, and I believe others will enjoy it and find value in it.”

Some of her favorite poetry accounts are:

| ‘It begins with a stone falling’ + ‘Singularity’ swipe : read : caption . As artists and poets, we are all in Beauty’s orbit. . It’s so lovely to be back with you after some absence, tending to other fields and needs. While I won’t be able to catch up with all your work, I look forward to reading more beautiful pieces from you… A nod of gratitude to those who began following during my mini hiatus; I hope to soon discover the gems of your beauty! . This image, and the little poem that followed, are belated responses for #novembersymphonies prompts ‘Gravity’ and ‘The space between the stars’. Thanks to @l.t.pelle @adelinewrites and @emmablaspoetry for the dual inspirations. . #poet #poetry #writing #writingcommunity #packpoetry #herheartpoetry #silverleafpoetry #globalagepoetry #bluewhalepoetry #heartofpoets #augiesbookshelf #drawing #sketch #illustration

In 2018, The Guardian reported that poetry sales were at an all-time high with Rupi Kaur’s “milk and honey” taking the no. 1 spot. The article quoted Andre Breedt, who said that “Poetry is resonating with people who are looking for understanding. It is a really good way to explore complex, difficult emotions and uncertainty.” He said this in the context of the unstable political climate the younger generations live in.

Instagram poets, however, have received backlash, accused of ruining the art form, as poet Rebbeca Watts argues in her essay, “The Cult of the Noble Amateur.” But others say it’s just different. Rather than tackling complex subjects and writing in a style à la T.S Eliot, Millenials have taken a simpler approach: prose-like and an imitation of the confessionalist movement with poets like John Berryman and Sylvia Plath.

CSUN creative writing professor Martin Pousson knows that writers should keep an eye out on for what readers are seeking. Pousson was awarded the PEN Center Literary Award in 2017 for his collection of short counter-realist stories, titled “Black Sheep Boy.” He encourages students to lead their own peers into locating new media spaces for creative writers.

“If readers now seek online poems, stories, and other creative writings online, then writers must find ways to answer that call — or else risk going unheard, unread,” he advised. “Also, in all genres, but, perhaps, especially in short stories, formatting narrative for online reading allows for new experiments in form and structure, with, for example, hyperlinks, visual illustrations, and interactive tales that involve the reader in a series of plot options.”

In other words, Instagram poets and readers can find something meaningful in the written words while opening to the possibilities of new ways to express their thoughts and feelings. As opposed to a blank sheet of paper, aesthetically, poets can present their work embracing color, images, and sound.

Hart mentioned that posting her work on Instagram has expanded her creativity, “there aren’t really any cons I can think of,” she said. “The pros are that it’s a great space to work in short form poetry, which I absolutely love. I got interested in the short form after meeting ruth weiss, the beat poet, who writes haiku as well as reading Natsume Soseki’s haiku.” ruth weiss is a poet that always her writes name in lowercase as a protest of “law and order” since all names are capitalized in her native German. Hart continued, “I wrote a series of haiku called ‘water replants you: musings on a pebble’ and gave them to ruth weiss for her 91st birthday.”

Thanks to this revolutionizing set of tools writers are their own agents, thus being able to skip the saturated and exclusive world of publishing. Pousson clarifies it this way, “creative writers who attract an active social media following may lead the way forward in publishing by leaping over the conventional route of agent then publisher then readership. Like Billie Eilish, who leapt over the corporate music system by releasing her debut single by herself on Soundcloud, a writer might post a poem or story on Twitter or Instagram herself instead of waiting for a corporate publishing house to create an audience.”

As a result, the publishing industry is paying attention to what writers are doing in these platforms and it becomes a site for them to scout for talent, potential writers that could be published under their press. An example of this is NPR’s poetry contest where writers shared their work using #nprpoetry or The Huffpost Twitterature contest.

Some writers still want to make a living off their words, so they have to embrace techniques that would make their work a bit more “commercial friendly,” after all not many poets reach the celebrity status the way Rupi Kaur has, and therefore it starts as a hobby and it could evolve into a full-time gig. In Hart’s case she still works a corporate job, full time, with steady income. “If one day I start to make money from my art, I would think about changing my lifestyle, but in the meantime, my job keeps me afloat. Then I split my time between music, poetry, social life, and all the other demands of life.”

For a multi-tasking digital generation, poetry still has a place and it couldn’t be better for the art from. It’s thriving thanks to a new wave of mobile-savvy writers. The art form still grounds its purpose in self-expression and proves that words remain more powerful than ever.