De’Jionae Calloway’s journey: From Missouri to Texas to California 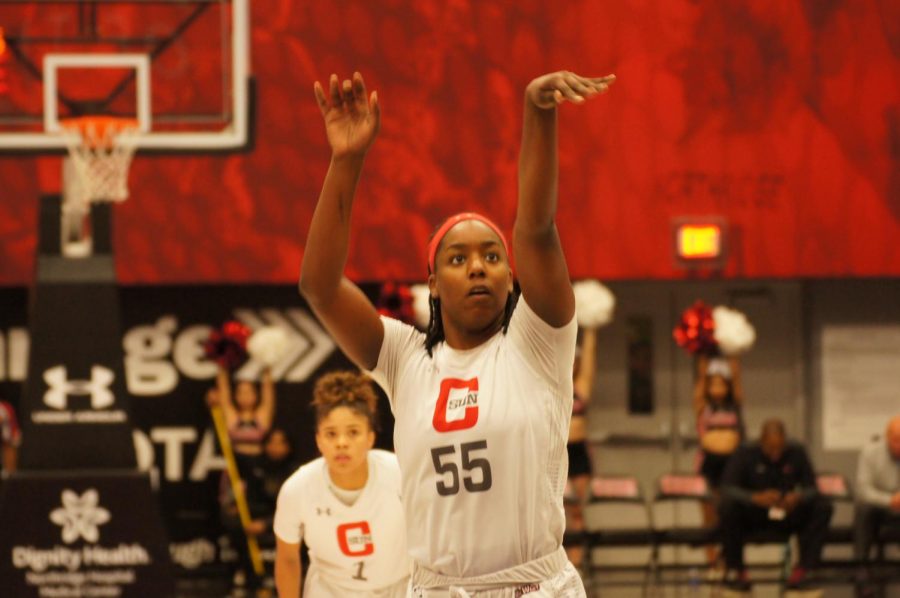 De'Jionae Calloway shooting one of three free throws in the 58-54 win over Hawai'i on Jan. 9. Photo credit: Bryanna Winner

Relocating anywhere can be a difficult transition, and women’s basketball forward De’Jionae Calloway has moved twice. The Lee’s Summit, Missouri native relocated to Texas in 2015 to play for Texas State University before transferring to CSUN during the 2017-2018 season.

She chose to transfer to CSUN because of the coaching staff and to get the California experience. She knew a coach who previously worked with the women’s basketball team, and reached out when she was looking to transfer.

Calloway sat out her junior year due to the NCAA transfer rules after coming to CSUN from Texas State, which was tough for her as she knew how much she could contribute to her new team. She felt as if she was almost being punished for transferring by not being allowed to play in games.

“They won the championship and I was happy just like I had played in the game myself,” Calloway said. “But it was still like that moment, like I want this too and I want to be 100% in, so it was pretty hard.”

Her last few days in Texas were difficult as she was leaving all of her friends and the teammates she had played with for two years. In contrast, her first few days living in California were overwhelming.

“There were so many people, a lot of palm trees and a lot of stuff that I had never really seen before,” Calloway said. “From a cultural standpoint, California is a lot different from Texas.”

She immediately noticed some major differences between Texas State and CSUN. Head coach Jason Flowers has a standard and a pace that he wants the team to play at, so they play fast.

“He always relates everything that we do on the basketball court back to life, like our work ethic and motivation,” she said.

Calloway’s parents were happy for her when she left Texas for California. They knew that she was making the best decision for herself.

“They thought of it as that going to California was cool because I had never been there before and they were excited for me to have that opportunity,” Calloway said.

Her mother is her biggest hero. She gave Calloway strength, wisdom and love, which are all the things that she wishes to have one day.

“My mom is the reason I do a lot of things that I do and the way that I think a lot of times,” Calloway said.

“It helps being stronger because I can hold my own against 6’6″ players,” Calloway said.

Her biggest accomplishment as an athlete is the growth she has had from the time she was younger up to now. Calloway has reached goals that she did not think were possible, such as graduating in spring 2019 with a bachelor’s degree in child and adolescent development: early childhood education and pursuing her master’s degree in educational psychology. Ultimately, Calloway wants to become a teacher and be an advocate in the lives of others.

“I want to be a person that lets the world know how important the work that early childhood educators do,” she said. “Let them know that it is so important, because what happens to children at an early age sets the stage for their life and I feel like that’s why people need to know it’s very important.”

The thing that basketball has taught Calloway the most is patience. Things will not always go exactly how people want it to, because they have to put in the work every day to get where they want to be in life.

“If you want something now, it’s not going to happen just because you say you want it,” she said.

Calloway’s family motivates her to succeed the most, especially her cousins. She is the first person in her family to leave Missouri for college. The pressure is on her to set the tone for her younger cousins and siblings.

She has a lot of confidence in this season’s basketball team. With the six new players — four freshmen and two transfers — she is excited about what’s to come. This new dynamic can either mean a good season or a struggle for the team.

“It was half of the team trying to learn how to make a new team and I feel like every day it’s getting better and better, and I’m excited to see how we do,” Calloway said.

Her goal for the season is to win a championship and it is going to take everybody on the team to give their all.

“It’s going to take everybody giving everything that they have every single day until the last day we have to do it because we don’t wanna look up and say we didn’t give everything we had,” Calloway said.