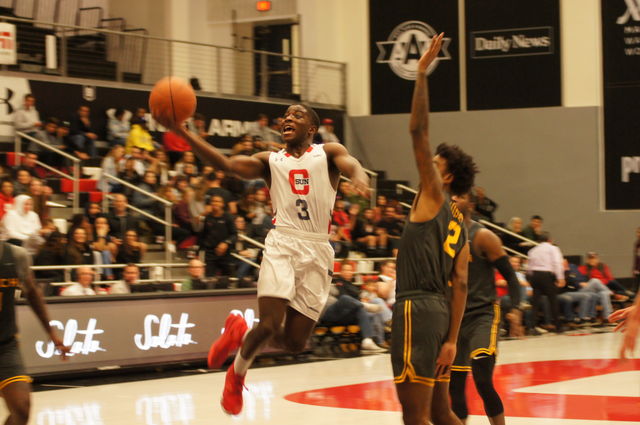 The men’s basketball team defeated UC Santa Barbara (13-8) 79-67 on Thursday, Jan. 30 to improve their record to 9-14 and sweeping the Gauchos for the season.

“Playing (UCSB) for the second time in eight days was tough, especially a talented team like theirs,” head coach Mark Gottfried said. “It is important for our program to beat UCSB twice. We needed it, especially since they beat us three times last year.”

The Matadome was packed and full of energy Thursday night. Before the game started, there was a 24.8 second moment of silence held for NBA star Kobe Bryant, and the eight other people killed in a helicopter crash on Jan. 26.

“Kobe’s death was heartbreaking and it was on my mind all week,” junior guard Terrell Gomez said. “I had a nightmare this week about it. Kobe was so inspirational and touched so many with his work ethic. I’m still trying to get over it, but tonight sure helped.”

“The team played well in the first half,” Gottfried said. “They passed the ball and were unselfish. Gomez made the shots when the team needed him the most. The end of the first half he stepped up and then he really excelled in the second half.”

Gomez scored 16 points in the second half and seemed like he could not be stopped at one point as he scored six straight points. He finished 7-for-13 from the field and 6-for-6 at the free throw line.

“I knew what to expect from them,” Gomez said. “They were going to play me really tough in the first half and made sure that I took good shots and only forced two shots. I let the game come to me and I played a heck of a game. My teammates stepped up and we just played a good game.”

CSUN never let up in the second half and handed UCSB their eighth loss, and sending them to sixth place in the Big West Conference, while CSUN is tied for third.

CSUN travels to Hawai’i to take on the second place Rainbow Warriors (13-5) on Saturday night, Feb. 1 at the Stan Sheriff Center. The game can be seen on bigwest.tv at 10 p.m.

“It’s going to be a tough turnaround to play Thursday night and then fly to Hawai’i to play Saturday night, but we have to accept the challenge,” Gottfried said. “We will be ready to go.”