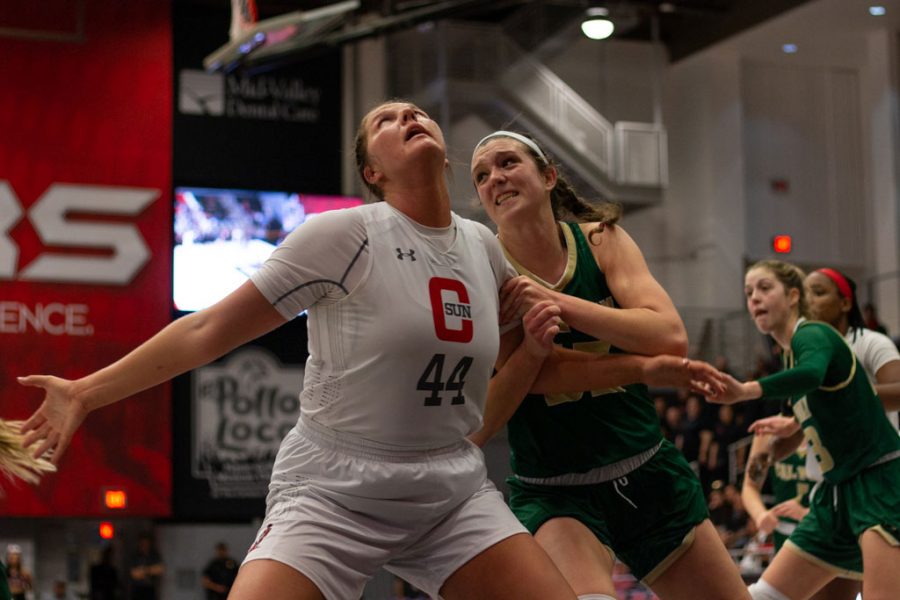 CSUN center Lauren Shymkewicz boxes out Cal Poly's Sierra Campisano from rebounding a ball during the game on Feb. 1. Campisano had a double-double against the Matadors, with 12 rebounds and 21 points. Photo credit: Logan Bik

“We had a tough time putting the ball in the basket,” head coach Jason Flowers said. “Any time defensively you hold a team to 52 points, you should have a pretty good chance of winning the basketball game. Obviously we scored 41 and whenever you only score 41 points, you’re going to struggle. We have to do a better job of making shots.”

Before the start of the game, a moment of silence was held in honor of Los Angeles Lakers legend Kobe Bryant, who passed away on Jan. 26 in a helicopter crash that also took the life of his daughter Gianna and seven others. The shot clock was set to 24.8 seconds in honor of the late Bryant.

“It was mostly just shock and disbelief,” redshirt senior forward De’Jionae Calloway said. “It still doesn’t feel real. When I started seeing it on the news, I got really emotional and sad.”

Cal Poly started off the game on an 11-2 scoring run, making three 3-pointers in a row. CSUN scored four of the next six points to make the lead 13-6 at the media timeout in the first quarter. The Matadors cut the Mustangs’ lead down to four points at the end of the first quarter to make the game 18-14.

The Matadors trailed 22-18 at the next media timeout, even though they started off the second quarter 2-for-10 from the field. The Matadors had a chance to even the game with 2:50 left in the first half, but junior Meghann Henderson missed two free throws. CSUN finished the first half by only making one of their last seven shots. The Mustangs went on a 7-0 scoring run to end the first half and take a 29-20 lead into halftime.

CSUN got their deficit down to six points on a couple of occasions in the fourth quarter, but could not get anywhere past that. The Matadors were off during the final 4:53 of the game, only scoring three points within that time span. CSUN had no choice but to foul Cal Poly, who scored their last six points of the game off of free throws, in the last minute to try and extend the game. Cal Poly ended their four-game losing streak and extended the Matadors’ losing streak to two.

“At times down the stretch, we gave up too many offensive rebounds and they got extra shots,” Flowers said. “I thought that early in the second half after we made adjustments and had talked about some things, we still lost track of their best scorer which cost us.”

“I think defensively we were very solid, it was offensive,” Calloway said. “We have been making a lot of adjustments lately and we have to move the ball more. We have to look at finding the best shot, not just the first one.”

Calloway scored 10 points, which was second to freshman Deja Williams who led the team with 12 points.

Cal Poly dominated CSUN on the boards all game. The Mustangs out-rebounded the Matadors 43 to 32, including 16 offensive rebounds.

“It is more like putting a body on a person,” Calloway said. “We did a lot of standing, so we need to go back to the basics and box out people and move them out of the way so that we can be in a better position to rebound.”

“We need to go back and look at this and find out better ways to put our players in position to score,” Flowers said. “Our players need to get comfortable being aggressive and making plays in order to make shots on the offensive end. I think we need to continue doing what we are doing defensively and continue to improve even in those areas.”