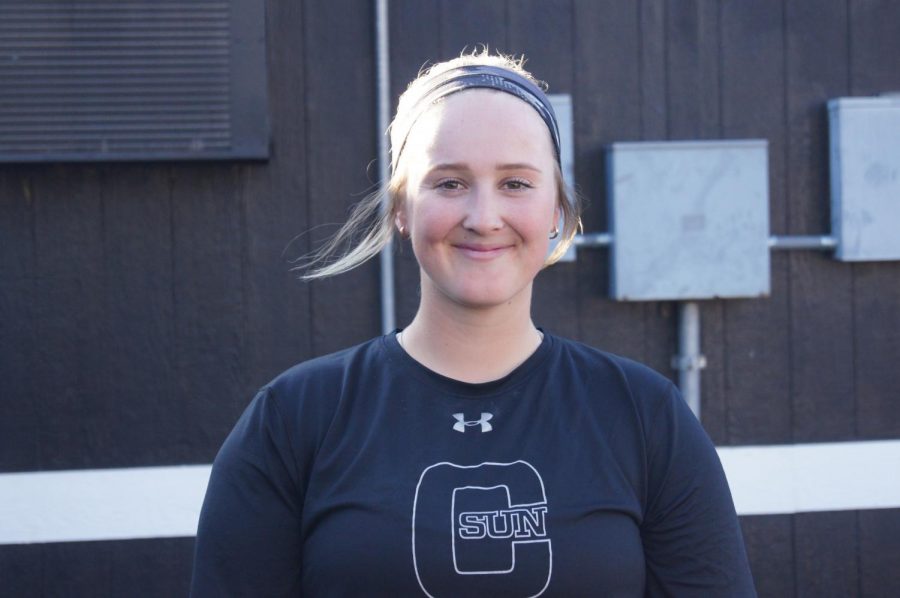 Autumm Cauthron after a practice on Jan. 22 of her spring 2020 season.

Softball is a passion that flows through the blood of the Cauthron family. Autumm Cauthron, a senior outfielder, is the second generation of Cauthron’s to play softball at CSUN. Her mother, April Cauthron, née Russell, played softball for the Matadors when she was a CSUN student herself.

Autumm began playing softball at a young age. Having a mother and older sister who played the game, she was introduced to the sport early and often.

“Growing up with my mom as a softball player, we were always super competitive in my house,” Autumm said. “Being able to go out and do what I love, fighting for a spot, (battling) against different teams is one of my favorite things.”

Starting around the age of eight, Autumm began to participate in organized softball. With the exposure to the game she had gotten from her mother, such as attending CSUN alumni games, Autumm’s passion for the game began to grow exponentially.

“I love being around people, I am a very big people person,” Autumm said. “So being with 25 other girls is amazing for me. I love learning from people and making connections with different kinds of people.”

After playing softball at Simi Valley High School, Autumm had to make the choice of where she would play softball in college. Although she did spend time visiting other schools, once CSUN became a realistic option, it became the clear choice. She was going to follow in her mother’s footsteps and fulfill her dream of being a Matador.

“Being around the game, coming to the alumni games since I was a kid, I was around this program my entire life,” Autumm said. “That was a big reason for why I chose to come here.”

April played softball from elementary school through college and won All-CIF honors her junior and senior years at Crescenta Valley High School. Although she did not have as big of a role on the CSUN softball team, April was a vital component of the team.

“My claim to fame is batting practice extraordinaire. A lot of my teammates now say that’s why we did so well,” April said. “I’m still very close with my teammates, and (Autumm) has seen that part of it. The game of softball has given our family so much and we’ve met such amazing people through the game, that’s why she loves it so much.”

Once it came time for her daughter to start playing the sport, April wanted to ensure she didn’t burn Autumm out of softball, and did so by letting her play every other year in her youth. April did not fit the mold of the typical sports parents, who are notorious for being rowdy and loud during the games of their children. April, on the other hand, was reserved and tended to watch from the sides rather than direct her daughter’s way of playing.

“My mom was very, very quiet,” Autumm said. “If I didn’t do well that game or if I made a mistake, when we got into the car she didn’t really say anything because she knew that I knew what I had done wrong.”

Having been a former principal at an elementary school, April has seen the impact first hand of what negative words from a parent can have on a child.

“The last thing you need is for a parent to critique what you’re doing out there,” April said. “The words from parents can be so much more strong and hurt so much more than anyone else.”

Instead of criticizing and always trying to fix her daughter’s playing style, April made sure to instill support and to make sure her daughter knew that she was good enough.

When it came time for Autumm to pick schools, April wanted her to travel alone to out-of-state schools to make sure she liked being away and wanted to live away from home. Although she visited schools like Nebraska, Autumm ultimately made the decision to attend CSUN.

“She decided to go somewhere that was closer to home, which is awesome for us,” April said. “It’s awesome for me and my teammates because now we can watch her play and support her.”

Autumm absorbed the characteristics of being a good teammate and knowing what it means to put a Matador uniform on through watching her mom play, which has shaped her into an integral part of the CSUN softball team for the last four years.

“Autumm is one of the most selfless people I have ever known,” senior catcher Jessica LaPierre said. “We came in together as freshmen so I am very close to her, as a friend and as a teammate.”

While Autumm as a teammate has been extremely valuable with the experience and knowledge she has garnered from her mother, April has also contributed to the softball program by helping organize alumni events and keeping the Matador community together and strong.

“She knows where the program has come from and she wants to be a part of it, it’s in her blood,” head coach Tairia Flowers said. “Just watching her mom and her teammates support her and our program as alumni, it’s an amazing feeling.”

As Autumm’s senior season begins, she will use all the experience and advice she has gotten from April throughout the years to try and achieve the goal of bringing a championship to Northridge, and she can count on her mother being there all the way through the final pitch.