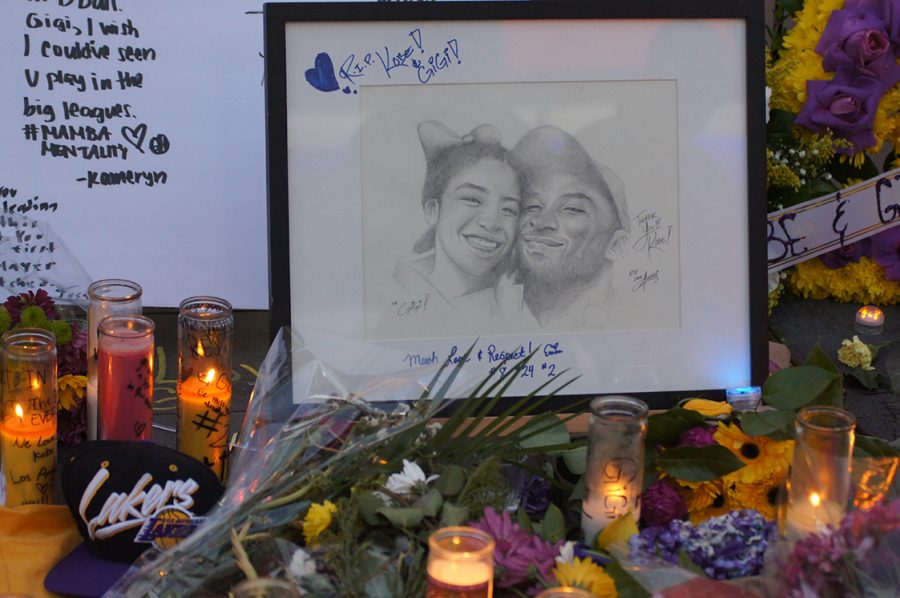 A fan made drawing of Kobe and Gianna Bryant sits among flowers, candles and other Laker gear as the memorial grows outside of the Staples Center.

It was a normal Sunday morning for Nathan Floyd until he got a phone call from a friend. It was during this call that Floyd, a lifelong Laker fan, learned that Kobe Bryant had died.

This type of reaction was commonplace all around Los Angeles in the aftermath of Bryant’s death in a helicopter crash, which also took the lives of his 13-year-old daughter Gianna, John Altobelli, Keri Altobelli, Alyssa Altobelli, Payton Chester, Sarah Chester, Christina Mauser, and pilot Ara Zobayan on Sunday, Jan. 26.

LA was shaken to its core beyond any force that an earthquake could have caused. To many Angelenos, myself included, Kobe was far more than just a basketball player. In the words of Blake Asherian, an 18-year-old Laker fan from Westwood, Kobe was this city.

“When you talk about LA, Kobe’s in the same exact sentence,” Asherian said. “He literally put LA on his back and we witnessed him grow up.”

Laker fans from all over gathered at the Staples Center throughout the following week to pay respects to the fallen Laker. Many left memorabilia or flowers, while many just came to mourn in the company of other fans. The outpouring of grief was reminiscent of Nipsey Hussle’s death less than a year ago, albeit on a larger scale. Both were icons who touted the value of putting in work, who were shining examples of what could be accomplished through sheer determination and hard work, and who proudly represented the City of Angels until the day they met their untimely demise.

Los Angeles will never be the same, even as we begin to resume a sense of normalcy over a week later. The best we can do is to take the lessons and values that Kobe embodied and apply them in our everyday lives. Go hard at everything you do, and be relentless in your pursuit of greatness.,