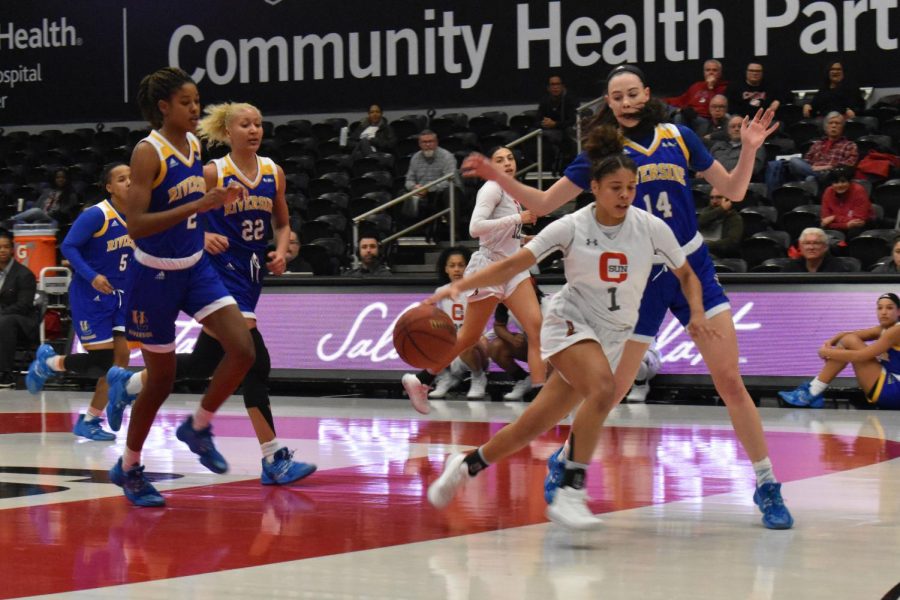 The Matadors’ issues lie ion offense, despite their defense allowing 58 points per game during Big West play, while also leading the conference in steals with 12.8 per game, and holding opponents to shooting under 40%.”

CSUN ranks ninth in scoring and field goal percentage, averaging a mere 55.1 points per game while shooting a forgettable 33.3% from the field. Their troubles continued on Thursday’s game against UC Riverside.

With CSUN failing to convert in the paint at a higher clip, the Matadors were also out-rebounded. In the past three games, CSUN opponents are averaging 45 rebounds, opposed to 33 rebounds from CSUN, a 12-point differential.

“I think the biggest difference in the rebounding is how many shots we miss on offense so it gives them more opportunities to get defensive rebounds,” said Flowers. “When you miss that many shots, your opponent is going to have a chance to get a lot more defensive rebounds then comparative if the ball goes through the net.”

Hope is not lost, as the team was able to score 60 points for the first time since the Jan. 16 win against Cal State Fullerton in overtime.

Additional time wasn’t needed as the underclassmen duo, sophomore Jordyn Jackson and freshman Deja Williams scored 70.9% of the Matadors points (44 out of 62 points). Jackson had a career-high 28 points, topping her previous career-high 20 against San Francisco earlier this season.

Jackson has been struggling lately as she’s only scored five points in the past two games.

“I felt like I came in with a different mindset,” she said. “All week I’ve been trying to get to the basket more and be more aggressive and today I felt myself doing that from the start and I think that’s what helped me out a lot.”

UC Riverside controlled most of the game, leading for just over 33 minutes. The largest Highlander lead was 14, but the Matadors were within striking distance multiple times.

Down 62-52 with 2:22 remaining in the 4th quarter, Williams hit a three, followed by Jackson lay-up cutting the lead by 5 points, 62-57 with 1:27 remaining in the game. Senior Eliza Matthews fouled Highlander big Bryanna Brady. Brady knocked down her first of two free-throws giving UC Riverside a six-point cushion.

Senior De’Jionae Calloway answered with a lay-up with 36 seconds remaining, but it was too little too late. Matadors opted to foul and send their opponent to the line. UC Riverside responded by knocking down three of their four free throws, icing the game.

Transition and rotation defense seemed to be their weakness on defense. CSUN allowed redshirt senior Jannon Otto and junior guard Keilanei Cooper to shoot a combined 58% from the field (18-for-31). UC Riverside also assisted on 18 out of their 25 made shots.

CSUN’s next opponent, Hawai’i, is currently 7-3 in the Big West sitting second in the conference. The Rainbow Wahine are also riding a five-game winning streak coming into this match-up on Feb. 13.

“Our effort will be different,” said Flowers. “We will be better then we were tonight in a lot of different ways. And that’s been the approach of our program since day one.”