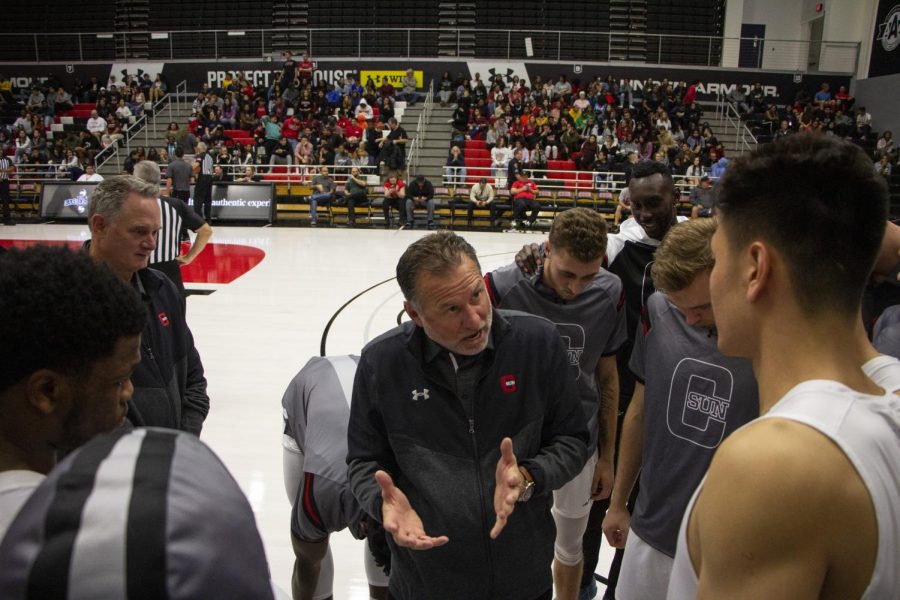 After UC Riverside’s Khyber Kabellis hit an equalizing floater with four seconds remaining in regulation, sophomore forward Lamine Diane found himself shooting a one-and-one at the free throw line with not only the game, but CSUN’s position in the Big West hanging in the balance.

Diane knocked down the first free throw, giving him another shot, which he also drained. Diane’s clutch free throws iced the game for the Matadors, helping them escape with a 61-59 win over the Highlanders after a late-game rally brought them back from being down by as many as 14 points.

“Lamine, he’s improved so much,” head coach Mark Gottfried said. “A year ago, he struggled from the foul line and this year, he’s just done a much better job.”

The numbers speak for themselves when it comes to Diane, who is currently shooting 66% from the charity stripe this season as opposed to 52% a year ago. While free throws have long been considered a weak spot in the potential NBA prospect’s game, they ended up being the difference in Saturday’s contest.

It was a cold night otherwise for Diane offensively, whose 12 points on 27% shooting were a far cry from his season average of 26. The Matadors in total shot 37.9% from the field and 33% from three-point range.

CSUN especially struggled from the floor early in the first half, and UCR took full advantage with a 7-0 run that lasted until junior forward Lance Coleman II nailed a three-pointer to bring the Matadors to within one point. Coleman then took full control of the half as he scored eight consecutive points on a fadeaway jumper from midrange and back-to-back threes. After trailing by four, CSUN went into the half up 28-23 over UCR.

“It was big for me,” Coleman said of his performance. “I haven’t been playing the last few games, so I just wanted to show the coaches that I’m ready. It started in practice, and then they gave me a chance to play in the game.”

Coleman noticed that UCR was playing zone defense, which opened him and his teammates up for opportunities to score from long range.

“They were zoning and obviously, he’s such a good shooter so we were able to get him in there and he made shots. I thought it was a big lift,” Gottfried said. “On a night that Lamine struggled offensively, I think Lance really helped us.”

The momentum generated by Coleman carried over into the second half, and the Matadors were able to stretch the lead to double digits off contributions by Coleman, Diane, and junior guard Terrell Gomez, who led the team with 17 points.

CSUN improves to 10-15 on the year and 5-4 in Big West play after Saturday’s hard-fought victory. They also take fourth place in the conference standings from UCR with seven games remaining in the regular season.

“Now in the month of February, you just got to grind them out,” Gottfried said. “You look all around the country, games go down to the wire. It’s not uncommon, and you just got to figure out how to win a game.”

The Matadors will host the Cal Poly Mustangs next on Thursday, Feb. 13 at the Matadome. The game will be broadcast on ESPN3.