Homecoming 2020: Unity from the Black Community 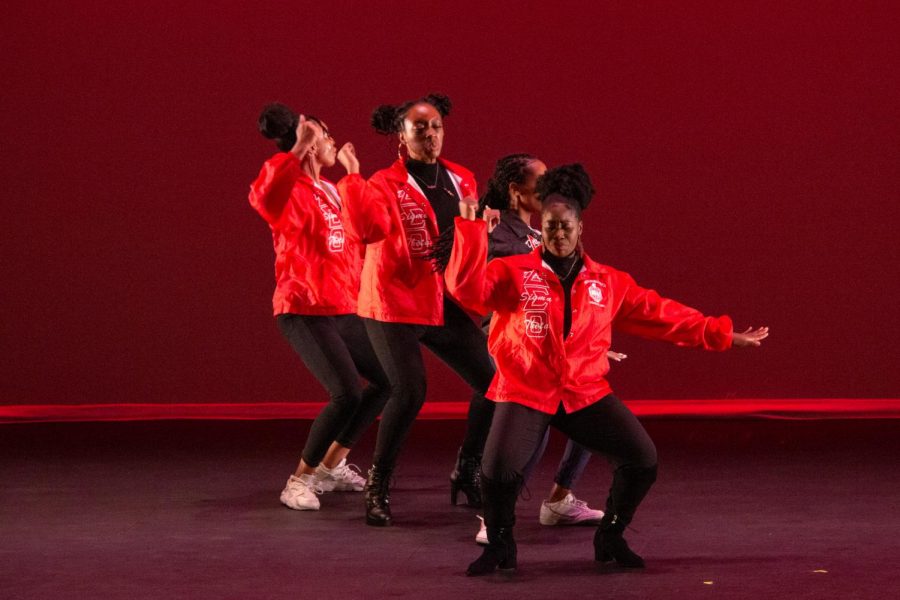 The ladies from Delta Sigma Zeta performing on Feb. 7.

A young black woman dressed in a light yellow power suit crosses the stage, the sound of her heels capturing the audience’s attention. Her booming voice fills the hall as she reads a list of demands from the Black Student Union of San Fernando Valley College, 1968.

Back then, their list of demands were no different from today’s student requests from the Cal State system: an institution that recognizes the presence of black and brown people on campus and the security of departments to continue on the legacy and history of their communities with qualified faculty that reflects their students.

Turner’s show idea came from his days at Hamilton High School, where every year there was a performance in honor of Black History Month where he saw the cohesion of the black community.

“I decided we needed a little cohesiveness here at CSUN so that’s what we did, we decided to create a program that would work for all black students,” Turner said.

Turner says he hopes this performance becomes a tradition, as this was their first time putting together a show ever. “I think that the presidents after me will enjoy this, because this is a thing that brings all the black orgs and clubs together and really represents black history month,” said Turner.

The following scene turns to professor Aimee Glocke reading the syllabus for a history class full of black students, listing all the wars they will cover. CSUN student Bryant Matthews stands up and tells her that he’s tired of learning about wars and avoiding black history.

Matthews’ frustrations are voiced through a poem, where he says: “History is the narrative of the white man’s education at its best” not acknowledging his history where he comes from, “kings and queens that rule more than what you call the jungle.”

Turner said that this event came from the BSU wanting to find a way to celebrate Black History Month.

They researched hidden figures who would make appearances played by various students. The first hidden figure was Archie Chatman, played by Jalani Ligons, the first BSU president at CSUN, where he gave a speech honoring Martin Luther King Jr.’s death five months earlier, and addressing the injustices of police brutality that his fellow classmates endured. By calling on the stigma that black people’s skin resembles dirt, Ligons moved the audience with Chatman’s words.

“My beautiful black people, I take comfort in knowing the true potential of what dirt can do. In reality we are the seed and our education is the water and with the knowledge that we gain and the fight that we put up, ain’t nothing stopping us from blooming into beautiful flowers,” said Ligons speaking for Chatman.

Turner said he wanted black students to know their history, since there’s not many of them on campus.

“We started 60 years ago with Archie Chatman who led the revolution for the BSU and then we moved forward to now ending with Beverly Ntagu who was AS president last year,” he said. “So we came from 1968 to 2020.”

Students gathered on stage and reenacted the Nov. 4 Incident, when a black football player was assaulted by his white coach. Students held their fists in the air, reciting the chant: “No justice, no peace, no racist police.”

“Continue to speak, continue to grow. No one can silence you,” read Weeks on behalf of Watkins.

“It was very humbling,” said Watkins. “I think for someone who’s looking backwards and thinking who are you and have you been true to your values, and I feel pretty good about that.”

The rest of the night was filled with performances from the CSUN Matadolls, appearances from National Association of Black Journalists, Black Leadership Council, CSUN Naturals and many other black student organizations. Members of Phi Beta Sigma Fraternity Inc, Zeta Phi Beta Sorority Inc and Delta Sigma Theta danced across the stage, proudly announcing their organization’s history and values.

The crowd filled the hall with laughter and applause, with cheers and snaps of support. When a student passionately read “Dear White People”, “Yes Lord, Amen” was the response. As another student sang “Lift Every Voice and Sing,” the crowd erupted in cheers.

Raquel Holloway, a member of the BSU said the support from black students coming to Welcome Black week has been amazing, as they create spaces for students to connect with the black community.

“I think we are setting the ground for something to happen over the years,” said Holloway.

Watkins said the unique nature of CSUN is being “in a region where we can develop students who will go out in the world and make a difference and I think that allows us to set ourselves apart from other institutions.”

The night closed off with a final dance party as everyone in the room, cast, crew and audience moved to the music.