Men’s volleyball struggle to start the season, losing both matchups of the weekend back to back 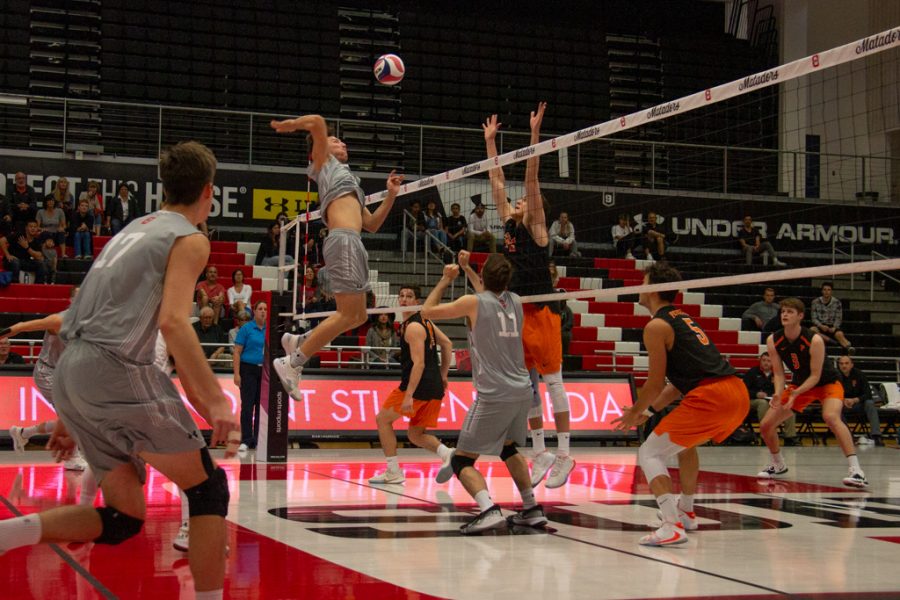 CSUN's outside hitter, Maciej Ptaszynski, spikes a ball against Princeton on Feb 1. Ptaszynski had 11 kills against the Tigers during the game.

Men’s volleyball struggles to start the season, losing both matchups of the weekend back to back
The men’s volleyball team hasn’t gotten off to the best start this season, as they dropped both games over the weekend back to back, the first against USC and the second against #13 Princeton. The Matadors now hold a 2-7 overall record.
“We’re not where we want to be right now,” said head coach Jeff Campbell. “It’s difficult to be really good over time when you’re playing a lot of young and inexperienced players. We are very talented but just don’t have a lot of experience.”
Having opened the season as the #13 ranked team, CSUN has struggled out of the gate, losing five of their first six games. They were able to end their losing streak during a home match-up against Cal Lutheran on Jan. 25. Next, the Matadors were tasked with going up against two quality opponents in the span of 24 hours.
The first game of the weekend was against USC. The Trojans came into this match with a 1-6 record. They were in a similar spot as the Matadors, desperate to get a win in order to put their season back on track.
Momentum swung throughout the match. The Matadors would dominate some sets as they did in the second and third, and in others, they would quickly fall behind and not be able to recover from earlier mistakes.
“We’ve been making a lot of changes in practice and we can really see it throughout the game,” said freshman outside hitter Griffin Walters. “I thought we played great and was one of the best matches we have had.”
The back-and-forth action all led up to the decisive fifth set. Both teams came out very aggressively, desperate to come away with the win. Neither team led by more than two points during this entire set.
The Matadors never let up and were competitive with the Trojans until the end, only coming up one point away from taking the victory.
“I thought I had felt pressure before this,” said Walters. “It’s really easy to slip up and make mistakes, but everyone just has to keep telling themselves to reset and alleviate the pressure so they can perform.”
Looking at CSUN’s statistics, it would almost seem that they won the match with how well they played. Junior outside hitter Maciej Krmarzick was the leader for the Matadors offensively, getting a whopping 18 kills during this match. Walters and fellow freshman Kyle Hobus were also integral to the Matador offense with 15 and 13 kills respectively.
“We did enough to win the match. I gotta give credit to USC, they played well,” said Campbell. “A match like that is one play.”
After an exhausting and intense match-up with USC, the team returned to the Matadome just 24 hours later to take on the #13 ranked Princeton Tigers.
The rested Tigers took advantage of their fatigued opponent and were able to take the lead early on. Going on a 7-1 run almost instantly, Princeton quickly was up 10-4 in the first set.
The Matadors would go on runs to try and close the gap. The closest they got was when they shrunk the lead to 17-15. However, the Tigers never allowed them to take the lead, scoring quickly and taking their lead back into an area of comfort.
Princeton finished off the set with an 8-3 run, winning it 25-18.
The second set was the closest one of the match. CSUN was adamant to not go down 2-0 against Princeton. Anytime the Tigers tried to extend the lead, players like Hobus and Ptaszynski would make impactful plays on offense to keep the set competitive.
“One of the advantages (Princeton) had tonight was that they had a lot of seniors and a lot of experience,” said Campbell. “Our hitting numbers were not as good, but that was a direct reflection in terms of what (Princeton) was doing.”
The third set was where the Matadors’ fatigue showed. Princeton was able to jump out to an early 4-0 lead and never looked back. The will of the Matadors was still there and they were using every last bit of energy to win this set.
“Definitely some of the guys were tired, but we were ready to play,” said Hobus. “Every other team is practicing all the time and playing all the time, so we can’t be using (fatigue) as an excuse.”
They were able to tie the set late, setting up a potential miracle comeback. However, that never came to fruition as the Tigers scored six straight points and were comfortably able to put away the Matadors and win the third and final set.
“This was a great week of practice for us in terms of getting better,” said Campbell. “I know our guys are disappointed right now, but we did a lot of great things this week.”
Although the story of the season has had more losses than wins, the Matadors are confident in their young team. Of the Matadors that played this weekend, Ptaszynski was the only upperclassman.
“It’s a lot of pressure and a lot of these young guys they’ve never felt this before,” said Campbell. “We have probably one of the youngest teams around, but I am really proud of the guys in terms of the level that they played at for their age.”
The Matadors’ next match will see them travel halfway across the country to St. Louis where they go up against the Lindenwood Lions (5-4). Their next match in the Matadome will be on Feb. 14 against the UC Merced Bobcats (6-5).