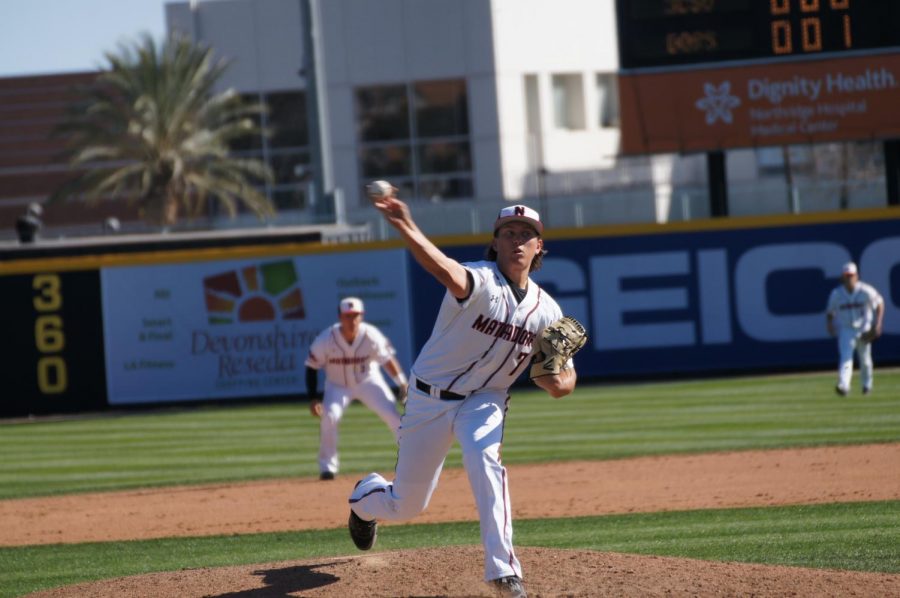 The year is 1970. The San Fernando Valley State College baseball team, led by head coach Bob Heigert, have overcome an early loss and navigated their way through the State College Division tournament to claim a national championship.

Fast forward 50 years to the 2020 alumni baseball game, where Heigert once again leads his squad onto their home field sporting custom hats commemorating their run to the sole national title in program history. After a brief ceremony, they tip their caps to the home dugout where the next generation of Matador baseball hopes to carry on the legacy they left.

“They laid the foundation,” redshirt senior Jayson Newman said. “We’re just trying to build off that. We love having them here and we want to make them proud.”

Current head coach Dave Serrano is no stranger to championship teams and he emphasized the camaraderie on display amongst the 1970 squad in hopes of achieving a similar goal.

“Probably 85% of that 1970 team is present this weekend,” Serrano said. “It just shows the culture that coach Heigert set for them back in the day. That’s the standard that we want to have under my leadership, one of a championship team.”

Serrano, who is entering his first season at the helm of the Matadors, has experienced success at nearly every stop of his 24-year career as a Division 1 coach, including stints at UC Irvine, CSU Fullerton, and the University of Tennessee where he led his teams to five Super Regionals and two College World Series trips. He also served as the pitching coach at West Virginia and Cal State Fullerton, where he was a part of the 2004 national championship team.

The adjustment to a new program is rarely smooth, but Serrano is embracing the challenges that come along with establishing a winning culture.

“I wouldn’t say the transition has been seamless, but it’s been good,” Serrano said. “My coaching staff and I understand where some of the speed bumps are and we’re overcoming them on a daily basis.”

While overcoming these obstacles are not an ideal way to begin a season, Serrano remains steadfast in his expectations for the 2020 season.

“No one will exceed what my expectations are for any program I’m a part of,” Serrano said. “I like this team a lot. We haven’t won or lost a game together yet, but I like the ingredients of what we have and it’s all about changing the mindset to a winning attitude. We have to learn how to win and how to deserve to win which are things we’re working on every day.”

Winning at Matador Baseball Field was not much of an issue for CSUN last year and it would be reasonable to anticipate similar success in 2020. The offense remains stout despite losing some of their top hitters to graduation. Incoming freshmen and transfer students have littered the Matador roster with capable position players who hope to capitalize on their home field’s friendly offensive environment.

The true test lies with the pitching staff whose ability to keep balls on the ground will be paramount when the wind begins to blow out and carry fly balls over the fence with regularity. Serrano is keeping his options open as far as who will be assigned to tame opposing offenses, but a thin rotation means health will serve as the defining factor in the staff’s performance.

“It’s going to take the grueling part of our first five or six weeks of our schedule to get answers as far as our options in our starting rotation are concerned,” Serrano said. “But we’re going to have to stay healthy on the mound, that’s a key. We have good options but sometimes I’d rather have quantity over quality.”

Depth at the catcher’s position is another defining factor. While All-Conference backstop Sean Skelly more than solidifies the production from the position, a shoulder injury to backup catcher Victor Cerny puts the position on thin ice.

“We don’t have a ton of options behind the plate due to unfortunate injuries, so I think staying injury-free is going to be a key thing more than any individual player’s production,” Serrano said.

While the obstacles are glaring for the Matadors as the season approaches, they do not impede the excitement and anticipation of the home opener on Feb. 14.

“I’m very excited for everyone,” Newman said. “We’ve put in a lot of hours to get to this point. We’ve still got a good three weeks to go, so we’re excited to get to work fine tuning the little things before we play another competitive season.”

Few within the college baseball community are taking notice of the Matadors chances heading into 2020 after a down 2019 season, but that’s just the way Serrano likes it.

“That’s the best way to do it,” said Serrano while flashing a subtle smirk. “Sneak up on people when they don’t expect things out of you.”