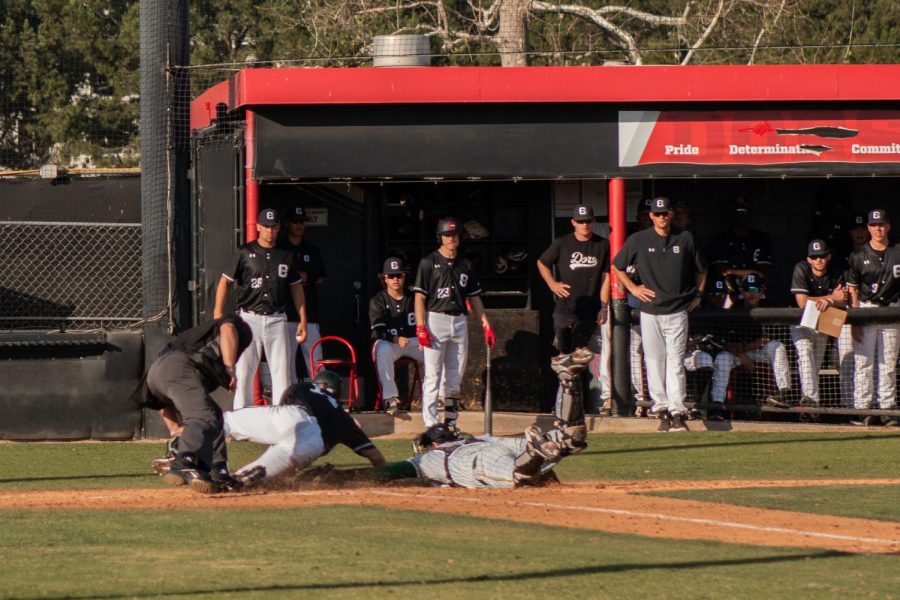 Blake Doremus sliding to home plate against the University of San Francisco on Feb. 14.

The sound of the ball leaving the bat reverberated throughout the ballpark.

With two men on in the seventh inning of a tie game, the University of San Francisco Dons seemed to have finally come up with their first big hit of a frustrating weekend.

“I saw that ball hit from left field and I didn’t think it had a chance to go out,” said junior outfielder Kai Moody, “but when we’re playing at home, everything has a chance to go.”

The visiting fans from San Francisco prepared to explode as CSUN sophomore right fielder Andrew Lucas approached the outfield wall. After a few stutter steps to time his ascent, Lucas leaped to make a miraculous, home-run robbing catch to preserve the tie and electrify the home crowd.

“I don’t know if he caught it clean, but he brought it back which was huge. If he doesn’t make that play, who knows what happens,” Moody said.

An inning later, redshirt senior Jayson Newman drove in the go-ahead runs with an opposite field double to secure the weekend sweep to begin head coach Dave Serrano’s tenure as a Matador.

“It’s not just about the three wins, it’s about how they played,” Serrano said. “We were able to grow through some tough situations and fight through adversity. That’s how we’re going to be able to build as a team and as a program as we go farther in the season.”

History repeated itself with the weekend sweep, as it was the first for the program since 2002 when they faced the University of San Francisco.

The 2020 version began with Friday’s home opener where redshirt senior outfielder Blake Doremus hit the ground running with a first inning two-run home run. It would be a sign of things to come for the Matador offense as they took advantage of a Dons error to put up a four spot in the fifth inning to commence the rout.

CSUN recorded two more runs in the later innings on the heels of a patient approach that wore out the USF pitching staff who walked more batters (7) than they struck out (6). Serrano emphasized this often-overlooked area of the offense as a key to winning games, especially at the college level.

“We want to get pitch counts up,” Serrano said. “The one thing about college baseball is that a lot of teams aren’t really deep with pitching. So the more you can get a pitch count up, the better it’s going to be.”

The runs were more than enough for sophomore starter Blake Sodersten, who dazzled through six shutout innings with seven strikeouts. Sodersten responded like a veteran when tasked with his first career Friday start, but he could feel the excitement building up as the first pitch neared.

“(The night before) I was mentally preparing so I wasn’t as nervous, but when the day came and I was pitching in the bullpen, the nerves were getting to me,” Sodersten said. “Once I pitched the first inning and got out of it, that’s where all the nerves went away because I started to trust my defense and all of my pitches.”

In a friendly offensive environment like Matador Field, Sodersten kept his fastball low in the zone to prevent the Dons from elevating anything and utilized his slider to keep them off-balance and generate swings-and-misses.

That philosophy set the tone for the CSUN pitching staff, who were seen as the weak link of the team heading into the season. In addition to preserving the shutout, the relievers drove the staff’s strikeout total to 15 on the night en route to a 8-0 victory.

“I know there’s a lot of people that are doubting (our pitching) but I feel like we have a really deep staff,” said Sodersten. “I feel like our position players have started really hot as well so I’m really excited to see what the season has in store for us.”

It would continue on Saturday when the Matador offense got things going early thanks to clutch two out RBIs by Newman in the first, third and fifth innings. Led by Newman’s three hit day and a bit of help from some more shaky San Francisco defense, CSUN was able to build another comfortable lead.

Sophomore starter Blaine Traxel pitched six innings of two run ball with a more contact-oriented approach before handing it over to the pen. Self-inflicted trouble would come in the seventh when shaky control by multiple relievers brought home a run for the Dons. San Francisco clean-up hitter Jacob Munoz strode to the plate representing the tying run with the bases loaded and two outs, prompting Serrano to bring in redshirt junior Elijah Garcia.

Garcia was placed in a similar situation the game prior and struck out the only batter he faced to end the threat. His encore performance featured more of the same, as he struck out Munoz swinging to preserve the lead which they would hold onto in a 7-3 win.

The theme of early Matador offense carried into the last game of the series when Moody led off with his first home run since transfering to CSUN. Finally, with a Division I program after spending two years playing at a community college, the San Francisco native expressed his excitement for his debut season at Northridge.

“This has always been a dream of mine, to play Division I baseball,” said Moody. “I’m surrounded by a great group of guys and I love every single one of them … It’s been an amazing experience so far.”

Moody complimented his home run with a double, changing the offensive narrative to a focus on individual players. Redshirt senior catcher Sean Skelly recorded a two-hit game with a solo home run as well to provide the early offense.

The bats would go on to stall for the first time all weekend as junior San Francisco reliever Julian Washburn threw 3.3 perfect innings, while the Dons came back to tie the game at three.
Serrano commended Washburn’s effort and his ability to establish his fastball up in the zone to set up his breaking pitches later in the count. He would run out of gas in the eighth inning when Newman’s heroics led CSUN to a 5-3 win and a series opening sweep.

The Matadors won’t have much time to celebrate as they turn around to face Washington State (1-2) at Matador Baseball Field on Feb. 17 at 2 p.m.