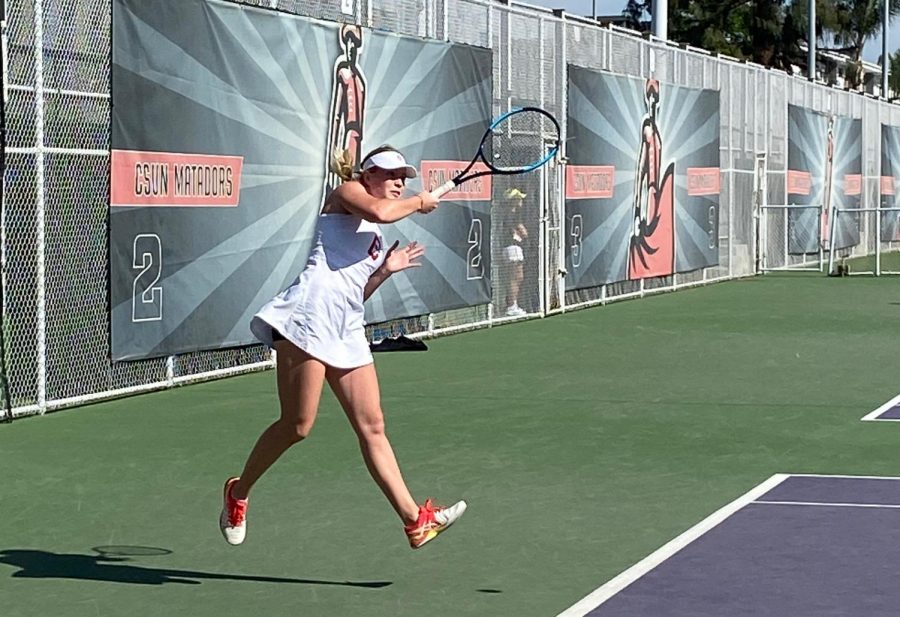 Junior Ekatarina Repina facing off against Oregon during her singles match on Feb. 15.

The women’s tennis team returned from a setback to defeat the Oregon Ducks 4-3 on Feb. 15 to improve to 3-1 on the season. This is the first win against the Ducks for the Matadors in four losing efforts.

“We were pressing in doubles and unfortunately Oregon jumped on us early and beat us,” head coach Gary Victor said. “We started off pretty slow in singles as well. We were down and the team showed a lot of character to come back and win against a very well-coached team who played really good.”

No. 6 Wurst struck first for the Matadors, winning her set 6-1 and 6-3 against Madisen Olsen of Oregon.

No. 1 single Repina started out behind 1-4, but battled back to defeat her opponent, Kahfiani, 7-5 and 6-1, giving CSUN the tie.

“I feel like in the beginning I wasn’t playing the game I was supposed to be playing. I made strategic decisions and I came back,” Repina said. “I felt the team energy started to pick up and we were fighting for each other, not just ourselves.”

The Ducks broke the tie and took the lead again as No. 5 Roenholt lost 6-3 and 6-2 to Petchey.

No. 4 Fraile Toboso lost a heartbreaker of a match to Eshet 6-4 and 7-5, giving Oregon the 4-2 lead over the Matadors.

“It felt really good to come back and win,” Coetzee said. “I was struggling at first because my opponent is really good and hits the ball very hard. Unless I hit it deep enough, it is game over for me. I had to slow down my rhythm which made her lose confidence. I’m proud of my performance.”

No. 3 Tan had the dual on her shoulders as it all came down to her. Oregon freshman Moral took the first set 6-3, and Tan took the second set 6-2. Moral went up 3-0 in the final set but Tan battled back, winning six of the seven games to give her the win 6-4 and the Matadors the 4-3 win over the Ducks.

“I won on the last point of the last match,” Tan said. “Clinching the match against a Pac-12 school is an indescribable feeling. I was down 3-0 and I had to pull it out for my team, having my whole team there to support me gave me confidence.”

“New Mexico is a loaded team, they’ve played in the NCAA tournament the last few years,” Victor said. “We need to stay healthy and be prepared for a dogfight. We will be ready.”