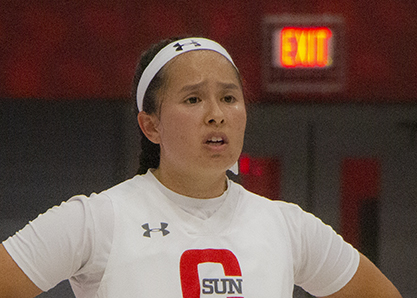 The Matadors lost their fifth game in a row in Big West action as the UC Santa Barbara Gauchos defeated CSUN 65-55 at the Matadome on Feb. 15. UCSB bumped their record up to 10-14 as CSUN fell to 9-15 on the season.

This was the Play for Kay game in honor of the late North Carolina State basketball coach Kay Yow, who passed away in 2009 from breast cancer. Play for Kay is an annual game that takes place across the collegiate and high school level to bring awareness and raise money for those suffering from cancer. The CSUN women’s basketball team wore pink uniforms to support the cause.

Senior Eliza Matthews was inserted into the starting lineup for junior Meghann Henderson.

“I just thought that with the effort that Eliza brings on both ends of the floor, I thought that it would help us at the start of the game,” Flowers said.

“I think we could have done a lot of things better to win this game, but mainly just rotating better on defense and giving up second chances to score,” Jackson said.

The Matadors outscored the Gauchos 16-9 in the third quarter to go into the last quarter only down by two. CSUN closed out the third on a 5-2 run and were behind 42-40 heading into the fourth.

The Gauchos pulled away from the Matadors in the last frame to put the game out of reach. UCSB started off the fourth quarter on a 15-5 scoring run.

At the next media timeout, the Gauchos had a 57-45 lead. UCSB ended their two-game losing streak and extended the Matadors’ losing streak to five.

“I think it just has to be a response to this,” Jackson said. “So we just have to come back to practice on Monday and just be positive, put these games behind us and just work hard to get the next one.”

“We expect Jordyn to be aggressive and we expect her to put the ball in the hoop for us,” Flowers said. “She’s a player who is more than capable of doing that on a regular basis. So we expect her to do those types of things each night out.”

UCSB dominated CSUN on the boards in the game as they out-rebounded the Matadors 36 to 30, which included 15 offensive rebounds.

“Defensively, we gotta do a better job of taking care of the paint and rebounding the basketball,” Flowers said. “Besides the threes that they hit, I also thought that there were some times where we gave up some offensive rebounds that were big and decided the outcome of the game.”

With six games left in the regular season until the Big West Tournament, the Matadors have some work to do. They have to play much better if they want to go to the tournament on a positive note and be one of the hottest teams.

“We gotta go to work every single day,” Flowers said. “We gotta make sure that we are taking care of details and we are executing. We have to put a value on every single possession and every single game. If we do that, then I feel like we can do some things in the next couple of weeks and go into the conference tournament.”

This was the first of two games in which the Matadors faced the Gauchos. CSUN heads to Santa Barbara for the next match-up on Feb. 20, after which they will travel to Orange County to play Cal State Fullerton on Feb. 22.