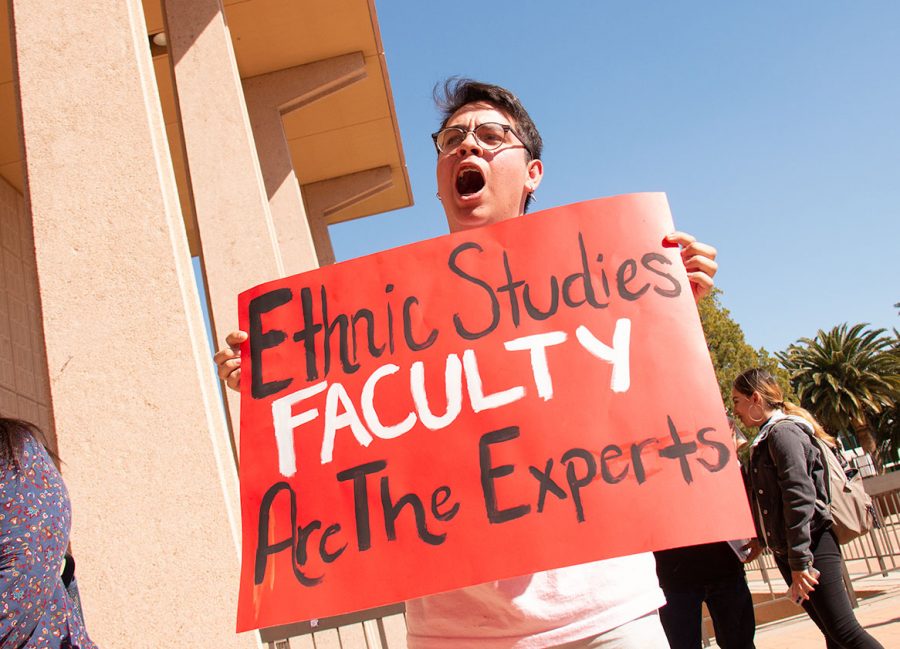 Fernando Lopez Gonzalez, 20, participates in the rally to keep ethnic studies classes on CSUN's campus. "I am Chicano, but I appreciate taking classes of other cultures to learn more," said Lopez Gonzalez.

Drums beat loudly outside of the Oviatt Library as students fought to raise awareness for ethnic studies bill on Feb. 20.

Assembly Bill 1460 is responsible for the requirement of CSU students to take courses in ethnic studies. The bill was first introduced on Feb. 22, 2019. If passed the bill would require students to take a three-unit ethnic studies course in order to graduate in the CSU system. However, with some opposition, the bill has been pushed to its third reading which is set to take place on Feb. 24.

Performances from the Aztec dance group, Canoga Park Danza Mexica, attracted others as they were entering the library. With large signs reading “ethinc studies faculty ARE the experts,” the crowd grew in a half circle shape around the dancing.

Later, students took to the megaphone to share personal anecdotes about the impact ethnic studies has had on them.

“The ethnic studies programs have been life changing,” said 21-year-old Malik Campbell. “It’s helped me have a healthy respect for other cultures.”

“Calling is super fast and it actually makes a difference,” DeLeon said.

With the bill up to Congress, students are trying to make their voices heard before Feb. 24.