Sierra Canyon advances to next round of CIF behind Amari Bailey 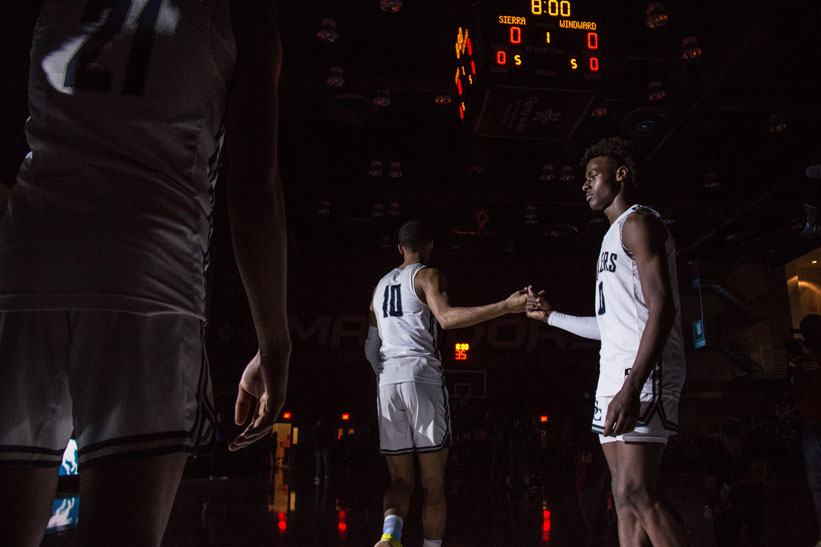 Sierra Canyon's guard, Bronny James (0) greets each teammate as the starting lineup is called during pregame on Jan. 23.

Amari Bailey may have led Sierra Canyon in scoring in a blowout playoff win over St. Anthony with NBA star DeMar DeRozan in attendance, but he was far from satisfied with his team’s performance at the Matadome on Tuesday night.

“We came out slow,” Bailey said. “We haven’t met the end goal and it’s just one game at a time. We kind of BSed this game and we could’ve done better.”

However slow the Trailblazers started off, they survived and advanced with a 61-49 win over the St. Anthony Saints to advance to the next round of pool play in the CIF Southern Section Open Division playoffs.

Bailey had 17 points for Sierra Canyon, followed by his McDonald’s All-American teammates BJ Boston and Ziaire Williams who had 12 and 11 points, respectively.

The game seemed destined for a blowout when the Trailblazers had a 17-4 lead over the Saints after the first quarter, however Sierra Canyon went cold offensively after a series of turnovers, missed shots and offensive fouls which led to a 7-0 run from St. Anthony to start the second quarter. The Trailblazers were outscored 13-6 by the Saints in the second and held onto a 23-17 lead going into the half.

The trio of Williams, Boston and Bailey took over in the second half to put the Sierra Canyon lead up to as many as 18, however St. Anthony slowly chipped away at the lead with contributions from junior forward Correy Brown and sophomore point guard Jaayden Bush who finished with 12 and 10 points, respectively.

Bush hit two free throws for St. Anthony with five minutes left in the game, bringing them to within 10 points for the first time since early in the third quarter, but by then it was too little too late. Sierra Canyon finished with a 12-point victory.

The Trailblazers move on to face the Etiwanda Eagles in the next round of pool play on Friday. The winner of that game will go on to face the winner of the St. Anthony vs. St. John Bosco game, two teams that Sierra Canyon has already beaten in these playoffs. The last team standing will play the winner of pool B to decide the CIF SS Open Division champion.

Despite being back-to-back state champions, the Trailblazers aren’t letting that distract them from the task at hand.

“What’s in the past is in the past. You can’t really do anything about that,” Bailey said. “I’m just going to do my homework, watch my film on each player, and then take it from there. Leave it all on the floor.”