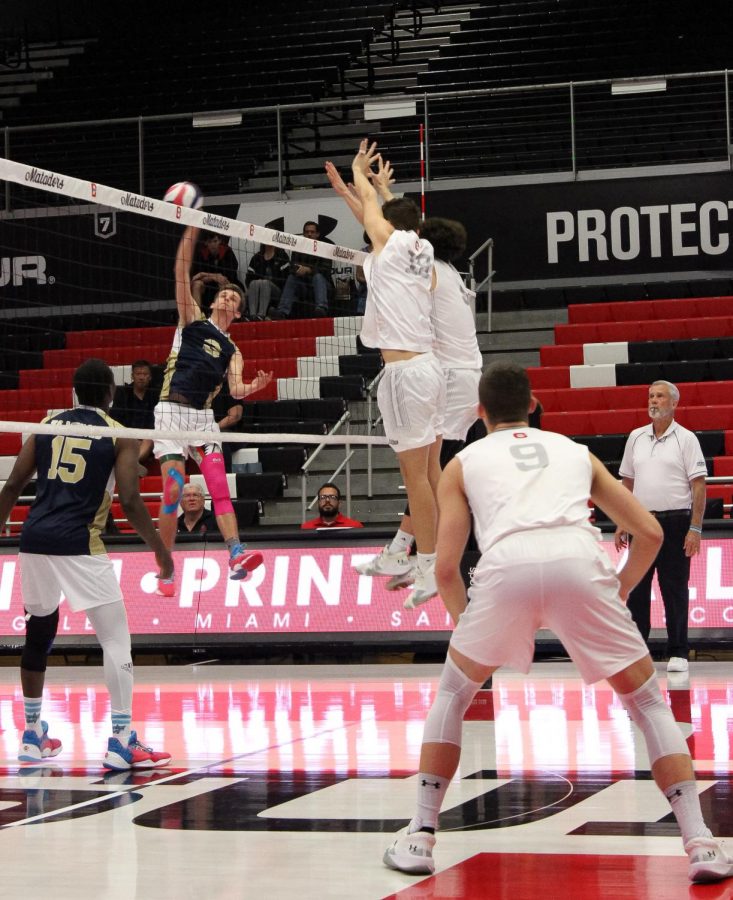 CSUN men's volleyball attempts to block a spike from UC Merced's outside hitter.

The Matadors were desperate for a win after returning from a weekend road trip to Missouri. Coming into the season ranked No. 13, the team has become more familiar with defeat than victory as they have lost eight out of their last nine games before their match on Friday.

The Matadors defeated the Bobcats in straight sets in their Friday afternoon matchup, putting an emphatic end to their losing streak.

“It feels good to get back on track,” head coach Jeff Campbell said. “We’ve been playing hard, we just haven’t been able to get over the hump.”

The Matadors came out aggressive to start the match. Within minutes, CSUN had jumped out to a large 9-3 lead. The offensive efficiency of players like junior outside hitter Maciej Ptaszynski and redshirt sophomore middle blocker Daniel Wetter fueled the Matadors’ dominance.

The Matadors ended up taking the first set by a whopping 15 points, with the final score being 25-10.

“Today’s performance was really good in terms of just executing,” Campbell said. “It was pretty dominant that for sure.”

The second set started off much more evenly. With the large loss in the first set, the Bobcats were desperate to not let getting behind become a habit. The tie lasted until the score was 6-6, once a 4-1 run by CSUN gave the Matadors the lead at 10-7.

What followed was a stunning 7-0 run for the Bobcats to even the score at 18. The Matador players began to tense up and make mistakes. Campbell used both of his timeouts during this stretch in order to make sure his players were not panicking.

The Bobcats took the lead at 20-19, capping off a highly improbable 9-1 run against the Matadors. However, an emphatic kill from sophomore opposite hitter Luke Krzmarzick flipped
the momentum in favor of CSUN.

Two straight kills from Wetter put the Matadors in winning position at 23-21. After a service error from CSUN, a kill from freshman outside hitter Griffin Walters secured the set for the team at 25-22.

“We’ve been working a lot on late-game scenarios,” Wetter said. “That way we handle the pressure a little bit better.”

The Matadors, up 2-0 in the match, were craving the chance to get a much-needed win. The end of their losing streak was in their sights.

CSUN jumped out early, quickly getting a three-point lead over UC Merced. Kills from Krzmarzick and Ptaszynski extended the Matador lead to a comfortable 12-7.

The back-and-forth between the two teams continued, but CSUN was able to extend their lead little by little. Three straight service aces from Ptaszynski put the Matadors up 17-10. The energy in the Matadome was undeniable; the team was finally going to get back on the side of victory.

But then an unlikely case of deja vu struck, as the Bobcats began to rally and chip away at the Matador lead once again. What ensued was a 7-1 run, shrinking the Matadors’ comfortable lead to just two points at 20-18. Just like in the second set, the Bobcats had crawled back from certain defeat to challenge the Matadors.

“That happens sometimes in team sports,” said Campbell. “You tend to take your foot off the pedal, it’s nothing on purpose but it happens.”

The Matadors did not lose their composure. With them being only five points away from victory, they were not going to allow the Bobcats to come back and extend this match any further. Kills from Ptaszynski and Krzmarzick put the Matadors in position to win the match.

With victory in their sights, Wetter scored back to back kills to end the set and win the match for the Matadors. Cheers erupted from the Matador sideline as their losing streak had finally come to an end.

“We came out and we played hard,” Wetter said. “We were able to push through and get the win, I am proud of my guys.”

The Matadors improved their record to 3-9 on the season, and they look to add more wins as Big West play approaches.

Wetter led the way offensively with 13 kills on the night, followed closely by Krzmarzick and Walters with nine and eight kills respectively.

Freshmen setter James McMillan recorded 37 assists for the Matadors, setting up his teammates to score often.

With Big West play approaching, the Matadors look to carry the momentum of this match into continued success.

“We’re excited about where we are at right now,” said Campbell. “We are gonna work hard at getting better. (Next) Friday we have a match against Vanguard and we’ll be ready for those guys.”