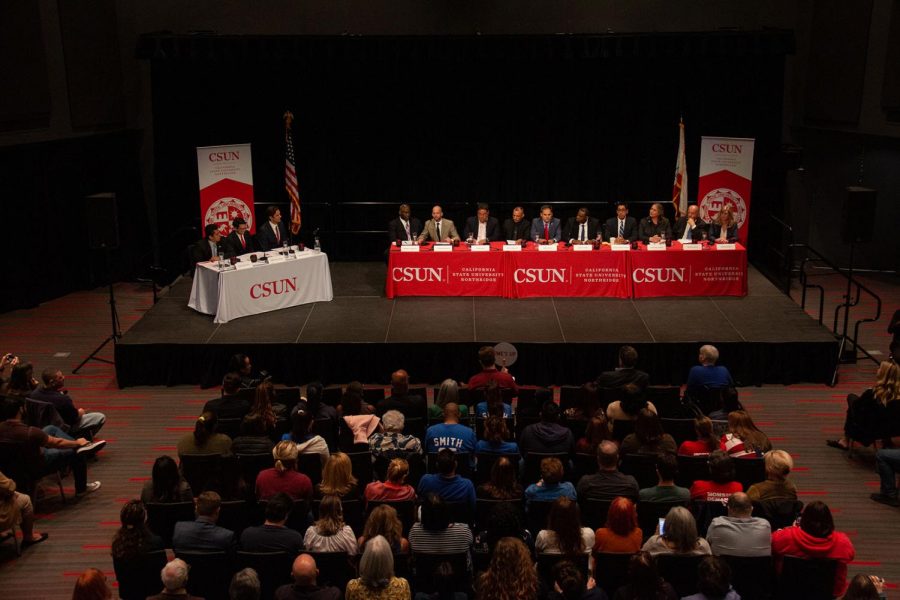 Political candidates and citizens fill the USU Northridge Center for the District 25 candidate forum on Feb. 21.

Hours before the doors opened at the University Student Union, a small crowd had formed in the queue outside.

Some dressed casually, but almost everybody in line was representing someone or something. Some were wearing shirts for Moms Demand Action, a grassroots organization aiming to reduce gun violence, or blue baseball T-shirts resembling Dodgers merchandise, with two words where the team’s name would normally be: Team Christy. On the back: the number 25.

As the start of the event grew nearer, the line extended by hundreds of people and stretched around the corner, with more than half wearing merchandise for local politicians. A shirt reading “Cenk 2020.” More Team Christy shirts. A few wore merch that read “Bernie 2020” and “Trump 2020,” even though neither are running for the 25th congressional district. One woman was even wearing a leather cowboy hat, adorned with an eagle and a “Mike Garcia for U.S. Congress” patch. Almost none were students.

This was the crowd for the California 25th Congressional District candidate forum at CSUN, an event co-sponsored by College of the Canyons in Valencia, intended to introduce students and constituents alike to the candidates running in the special election on March 3. CSUN is not located in the 25th District, but its status as a “commuter school” held positive symbolic meaning to the candidates.

“I have lots of friends that come to CSUN because there isn’t a university close to us,” Aníbal Valdéz-Ortega, a Democratic candidate and immigration attorney, said. “In our district, this is the biggest public university there is, so it’s special because of its proximity and the people who are here are our neighbors.”

“For me, it’s a special opportunity because my dad, who immigrated here in 1959, actually graduated from CSUN,” Republican candidate Mike Garcia said. “So this is going back to my roots and my dad’s history, so it’s exciting and I’m grateful that (CSUN) was willing to put the event on.”

The nature of the CA-25 election is unique in that most of the candidates running are on two ballots this year: one for the special election, in which the winning candidate will serve out the remainder of Katie Hill’s term, should they receive more than 50% of the vote, and another for the general election ballot in November. Should the top candidate receive less than 50% of the vote, the top two candidates, regardless of party affiliation, will go on to a special run-off election on May 12.

There were 10 candidates participating in the bi-partisan forum, split almost evenly between Democrats and Republicans, though the energy of the room lended itself to just three candidates: Garcia, a former Naval Officer and local businessman; Cenk Uygur, the Democratic political commentator and creator of The Young Turks; and most notably, assumed frontrunner Assemblywoman Christy Smith of the 38th District, making her first appearance alongside other candidates after not being able to make it to other events.

Despite the criticism she has received for her alleged non-presence on the campaign trail, Smith retains a passionate amount of support from constituents.

“Christy has been faithfully representing her constituents in Sacramento as their Assemblywoman while also running aggressively in this race. Any ‘criticism’ she may receive for that is more of a reflection on her political opponents than of Christy. Christy will always put the best interest of her constituents first, now, and when she serves them in Congress,” said Kunal Atit, Christy Smith’s campaign manager in an official statement.

“I’ve gotten to know her as an activist the last several years, and I find that she’s a very strong supporter of gun violence prevention,” said voter Kat Walker, who was wearing a Moms Demand Action shirt with a big Christy Smith button as she walked into a group sitting together and dressed identically.

The moderators explained at the start of the forum that this event was not a debate and that candidates would not be allowed time for a rebuttal, even if directly addressed. Candidates were arranged through a randomized lottery system from left to right into three groups and were asked pre-decided questions submitted from constituents over the internet.

They asked the audience to refrain from any kind of interruption while the candidates spoke, as this would eat into the one-to-two minute time frame allotted for answers. However, the crowd was just as lively throughout the event as they were in appearance, cheering enthusiastically for candidates as they spoke, while loudly booing for others.

One of the most divisive candidates onstage was Uygur, whose answers on everything from healthcare to gun ownership were tied directly to attacks on Smith and her credibility, rhetoric that both fired up his supporters and drew loud reaction from Smith’s supporters. No cheers were louder than when Uygur called for student loan debt relief, less corruption in politics and accountability for politicians in power; no boos were louder than the moments he tied these answers to Smith.

“All I know is Christy Smith is one of the people known as the corporate Dems that takes a lot of money from the establishment and that’s not beholden to my values,” Nicolas Storey, a supporter of Uygur’s but not a CA-25 resident, told us.

“For the first time, we actually got a contrast tonight about the candidates,” Uygur told The Sundial after the forum. “There’s giant differences between us, (and) the press never covers it, so that’s why people were so surprised when they heard about her voting record, all the money she takes from corporations, her ratings … for God’s sake, people need to hear that.”

Equally polarizing to the crowd was Garcia, a staunch conservative who leads in fundraising but presents a strict ideological 180 from Hill, calling for less government and more support for the president.

“For me, this isn’t about the money and it’s not about the power,” Garcia told The Sundial, “it’s about patriotism and doing what’s right for the country. It’s about continuing to serve my country and continuing to be the best country this world has ever seen.”

“I actually know Christy Smith on a personal level, and she’s a nice person, but I think she’s better suited for the assembly,” Jenniffer Jones, a Garcia supporter, said. “Mike is really straightforward and honest, this is his first time running for anything, and he hasn’t been tainted. He can probably get a lot more done.”

In a stark contrast to his opponents onstage, Garcia stood firmly and unapologetically in support of the president and the country, referring to himself onstage at one point as a “proud conservative.” When asked whether felons should be allowed to vote after serving their time, he gave the shortest answer of the night: “No.”

In a highlight of the ideological divide onstage, the same question was asked of Los Angeles County Department of Health Services employee Getro Elize, another Democratic candidate, who said he would allow felons to vote after serving time, drawing just as candid of applause as Garcia drew boos.

“It’s very important to reintegrate back into society,” Elize said. “That’s how you control your destiny.”

Despite her name being tied into almost every round of answers, Smith never addressed Uygur by name, sticking mostly to answering the questions asked of her and citing her 2018 win against Dante Acosta, party endorsements from politicians as prominent as Nancy Pelosi and Kamala Harris, and 39 years of residence in the Santa Clarita Valley as credentials for what makes her the best candidate.

“Tonight, I’ve been ‘Christy’ a lot,” Smith said, referring to other candidates’ references to her, “but in my day job, I’m Assemblywoman Smith. And in that job, I’ve been proud to deliver for this district time and again.”

Once the forum ended, the candidates split throughout the crowd to speak to supporters and undecided constituents alike. Smith walked offstage into a group of her supporters, who hugged her and took selfies before surrounding her as she left campus without speaking to the press. Uygur walked offstage to an interview with Fox News, before walking out to also take selfies and speak to his supporters for the rest of the night. Garcia spoke to his supporters, shaking hands and listening intently as they told him how well they thought he did.

“Who are you going to vote for?” one asked.

“None of them,” the other responded.

“I don’t even live in that district.”

Editors Note: Article has been updated due to Christy Smith’s Campaign Manager releasing a statement on her allegations regarding her campaign.