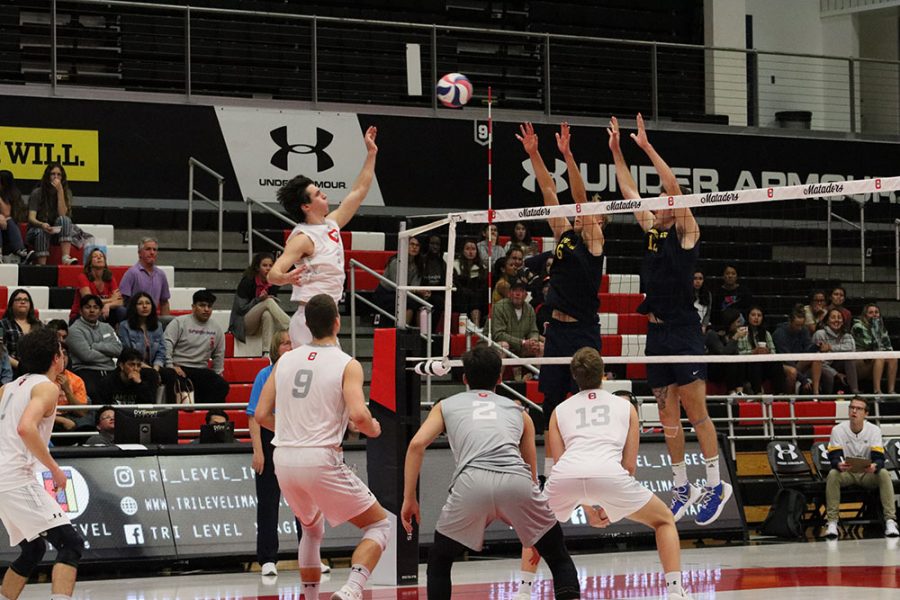 The never-ending third set. The score went back-and-forth between the two teams for what seemed like an eternity. The set had reached set point so many times that the announcers had gotten tired of announcing it to the crowd.

Coming into this match with a 3-9 record, everyone knew this was a must-win match-up for the Matadors. With the pressure mounting more and more after each serve, the Matadors were able to prevail and secure their second consecutive victory.

“That was gritty,” head coach Jeff Campbell said. “There is a certain amount of pressure that comes when you have to serve at match point that you can’t duplicate in a practice.”

Having won their previous game against UC Merced, CSUN looked to build momentum into the start of the conference schedule with a win against the Vanguard Lions.

The Matadors controlled the first set relatively comfortably. In the first minutes, they had jumped to a 4-1 lead over the Lions. With the Lions making the score 6-4, the Matadors went on a 5-1 run to increase their lead to a comfortable 11-5.

The set was never close again as the Matadors played efficient volleyball and were able to win the set by a wide margin. A kill from freshman outside hitter Griffin Walters sealed the set for the Matadors with a score of 25-17.

“It’s one of our best games that we’ve had in a while,” Walters said. “Our team chemistry has been coming together really well during practice and it showed in the game.”

Junior outside hitter Maciej Ptaszynski was an offense leader in the first set, with seven kills and a .600 hitting percentage. Walters was also a big contributor with five kills of his own.

The second set was a much more even affair. Both teams exchanged points throughout the set. The lead didn’t exceed a margin of more than three points until the end of the set.

The teams battled as they traded point for point. The Lions took a three-point lead at 10-7, determined not to lose the second set and not be down 2-0. This was their biggest lead of the match as the Matadors were able to tie the set at 13.

The set stayed even throughout, with both teams going up then losing the lead again.

Tied at 19, the Matadors went on a critical 6-2 run to win the second set 25-21. The run was capped off by a kill from Walters, giving the Matadors the commanding 2-0 lead in the match.

“I feel like we are making strides in the right direction and getting better,” Campbell said. “Every day in practice the guys are coming in and working really hard. The culture on our team is really good right now.”

The third set was another back-and-forth affair. Winning this set would have not only given the Matadors their second straight win, but their second consecutive 3-0 sweep as well.

The Lions, determined not to lose, stayed even with the Matadors throughout the third set. The largest lead for the Matadors during this set was by four points. Big plays from Walters and Ptaszynski propelled the Matadors in a position to win.

“I wanna give credit to Vanguard,” Campbell said. “They are a very skilled and good team.”

The story of this third set was at the very end, a set that should have been won at 25 points lasted all the way to a final score of 37-35. Both teams showed their resilience in this high-pressure situation, facing match point and being able to crawl back and even the score.

Down 35-34, at risk of losing the set, the Matadors were able to face the pressure and score three straight points to win the set and the match.

“For some of my freshmen and sophomores, they haven’t been in that situation very often,” Campbell said. “It was nice to get them those types of reps and win.”

“Our teammates had to depend on each other and just keep pushing and keeping a cool head,” Walters said. “Definitely an improvement from the past couple of weeks.”

The next two matchups for the Matadors will both be against UCLA, with the first being at the Matadome on Feb. 28 at 7 p.m. Following this match, the team will travel to UCLA to face them on March 5 at 7 p.m.

These are the last two matchups for the Matadors before Big West play begins. They will start the conference portion of the schedule on March 13 against the #1 ranked team in the country, Hawai’i.

“I’m feeling a lot more confident,” Walters said. “The team has a lot of faith in each other. If we keep on working, we can come in as strong as possible into Big West.”