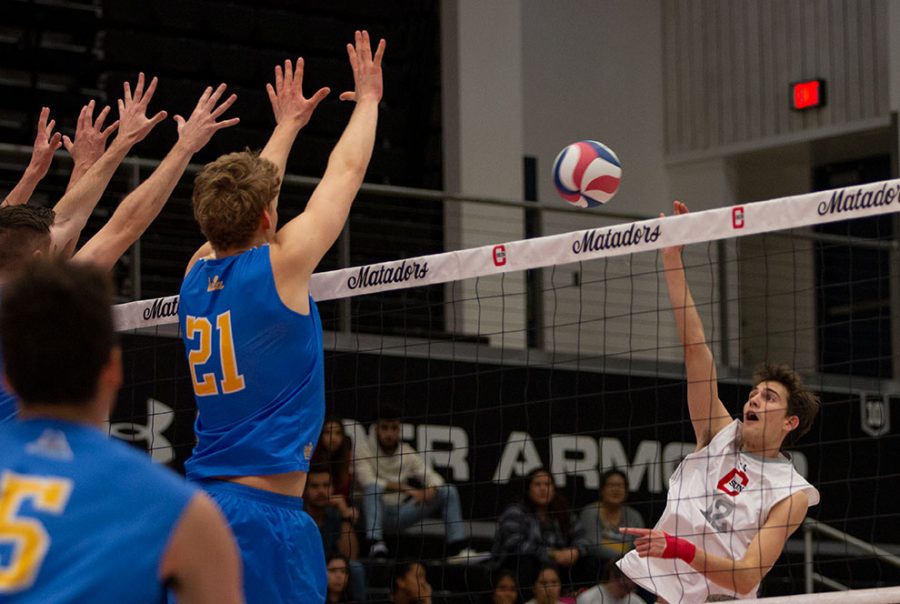 CSUN's outside hitter Griffin Walters (12) hits the ball towards a pack of UCLA Bruins on Feb. 28.

The cross-town rivals battled at the Matadome on Friday night, with the stands filled by UCLA and CSUN fans. The noise from both sides of the floor filled up to the top of the Matadome, adding to the intense atmosphere of the match.

“I just love having people here and watching us play,” freshman outside hitter Kyle Hobus said. “Some games we don’t get a huge crowd so it’s really nice to just see people here supporting either side.”

The Matadors fell to the No. 12 Bruins in straight sets, 3-0. The Matadors came into this match riddled with injuries, with players like sophomore setter Taylor Ittner and senior outside hitter Ksawery Tomsia unable to play.

The first set was the most highly contested exchange of the match. Both teams kept up with each other on the scoring end to start the set. Offensive plays from sophomore middle blocker Daniel Wetter and freshmen outside hitter Griffin Walters kept the Matadors competitive with the Bruins.

“(Wetter) is leading the country in hitting percentage, he is a guy we should be getting the most sets to,” head coach Jeff Campbell said.

Down 9-7 to the Matadors, the Bruins went on a momentum-shifting run, scoring six straight points to take the lead 13-9. UCLA stayed in control, being up 19-14 on the Matadors towards the end of the first set.

Surging with life, the Matadors scored five straight points to even the score at 19. However, the Bruins did not let the momentum shift in favor of CSUN, scoring on four of the next five plays, bringing the score to 23-20.

The Bruins were able to win the first set 25-22, stopping the Matadors’ comeback from developing further.

“We had them on the ropes in that first set, but we just made some boneheaded plays,” Campbell said.

Campbell made a change in the second set, subbing in Hobbs who hadn’t played since the team’s Feb. 8 match against Lindenwood.

“He came off the bench three weeks ago and his finger was sideways,” Campbell said. “The doctor said it was a hairline fracture and hasn’t played in a few weeks.”

Hobus had an instant offensive impact for the Matadors, scoring six points in the set and leading the offensive push of the Matadors.

The Bruins did not ease up on the Matadors, immediately taking a 7-3 lead to start the second set. However, the Matadors stayed resilient, staying competitive with the Bruins to the point of tying the set at 14 apiece.

“Our chemistry was up and our team dynamic never really let up,” Walters said. “We just kept on persevering.”

They stayed neck and neck with the Bruins for a few more plays, but they were never able to get over the hump and take the lead. Tied at 17, the Bruins went on an 8-2 run to win the second set 25-19.

“We did a lot of really good things,” Hobus said. “They are a really good offensive team so we struggled on defense and passing.”

The third set played out similarly to the second set, with the Matadors and the Bruins going back-and-forth to start the match.

With the Matadors up 7-6 early, the Bruins went on a 7-2 run to take the 13-9 lead and shift the momentum of the match into their favor.

The Matadors never recovered from that Bruin run, trading points but never able to go on a run of their own to close the gap.

The Bruins were able to close out the Matadors in the third set, winning 25-18, and won the match 3-0.

“Our inexperience showed at times,” Campbell said. “I thought UCLA served really well, that affected our passing which affected our hitting.”

“A lot of the younger players have to take more of a leadership role than they expected,” Walters said. “Everyone is doing their part to help the team come together and our progress has shown.”

The Matadors now sit at an overall record of 4-10 with the conference schedule kicking into gear starting on March 13 against Hawai’i.

“Our conference is probably the best conference in the country,” Walters said. “I wanna show how hard we can play, so winning those games would be huge.”

This is the first of two matches against No. 12 UCLA, with the Matadors traveling to Westwood to face the Bruins on March 5 at 7 p.m.

“They run a really weird offense, we learned a lot about that tonight,” Hobus said. “We are gonna have a better chance to get stops on their weird outside hits that they run.”