Follow along with two Sundial photographers, Logan Bik and Shae Hammond, as they share a first person view of what covering a political rally is like, just two days before Super Tuesday. 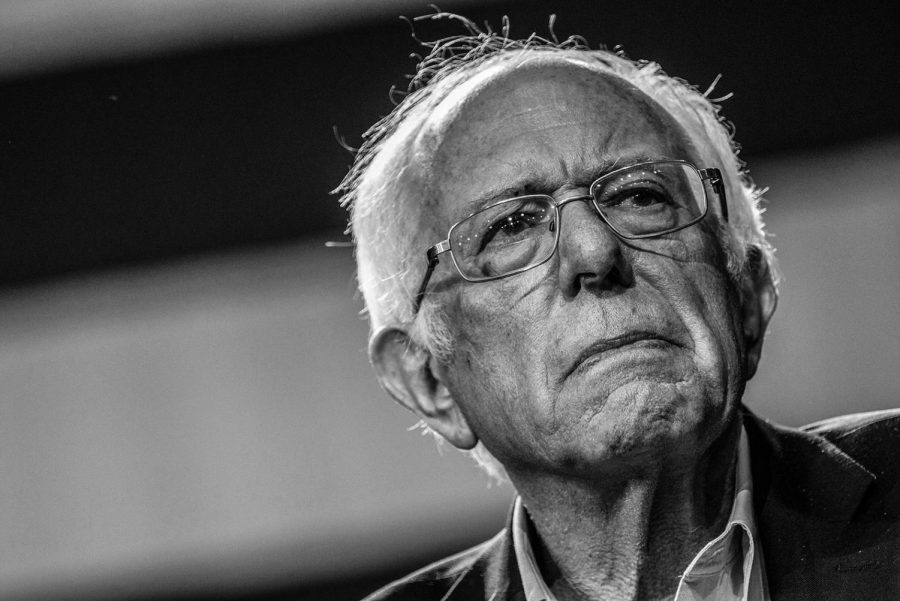 Bernie Sanders, along with celebrities Sarah Silverman and Dick Van Dyke, spoke to a crowd of around 15,000 about Sanders’ campaign’s main points on Sunday, March 1. To wrap it all up, activist rap group Public Enemy showed their support with a concert and a few messages.

Logan:
Walking up to the convention center, Shae and I circled the large industrial building, meeting photographers who were also struggling to find the media entrance.

Once we finally got in, tight security led to long lines and small conversations with other journalists around us. One of those was Carlos Gonzales, a CSUN alumni, now freelancing with Rolling Stone.

Shae:
I have always been ashamed that I had never been to a political rally. As a journalism student, it is almost a requirement to at least go once to watch and listen. When I stepped into the south hall of the convention center, excitement flowed into my hands gripping my camera. Because Logan and I had press credentials, there was confusion as to whether we should stay in the enclosed media area with the broadcast crews or navigate our way amongst the crowd.

Logan:
We chose to split up, I went as close to the stage as possible. Behind me, the barricades held back thousands of Sanders’ supporters. In front of me, nearly 30 photographers competed for angles, as the opening speakers began to take the stage. On one hand I knew I was going to get a clean shot once Sanders got on stage, but on the other hand, I wanted a photo that stood out from the rest that were being taken all around me.

Shae:
Before anyone stepped on stage, I wandered around the perimeter of the growing crowd for what seemed like hours, yet to take a photo worth sharing. I knew that I would get trapped within the mass of people if I were to go squeeze in before speakers presented, but I also dreaded being trapped too far from the stage. More than anything, even water, I wanted a clear picture of Bernie Sanders. So I began to squeeze through children, teenagers and adults, stepping over Bernie admirers sitting on the concrete floor with their signs at their feet.

Carrying two camera bodies around my neck while navigating through a packed crowd is not an easy task. I was thankful to find a spot in the pit that offered a possibility of a clear shot at Bernie’s podium, however, a woman’s curly, brown hair just in front of me left a small window of opportunity for decent photos.

Logan:
As comedian Sarah Silverman was giving her speech, she touched on a couple different topics, but focused on Sanders’ label as a socalist.

As Silverman was getting the crowd excited, one of Sanders’ staff members kicked all of us out of the small section in between the barricade and stage, stirring up confusion amongst fellow photographers. With little to no communication from the staff, the photographers were unclear if we were going to be let back in. Nearly 15 minutes later, just before Sanders was to take the stage, we were told that there were just too many of us up front. They finally let us back in, split up into groups, where we got five minutes during Sanders’ speech, to get the photos we needed. One group would go during the walkout, and the other would go during the middle of his speech. I got wrapped up in the second group, during his speech.

Shae:
As Dick Van Dyke stumbled through his speech saying, “Where was I … looking back … What was I going to say?” I stood tall on my toes, bobbing side to side for a clear shot of the 94-year-old actor. I had been standing with the same group of people for nearly three hours, an elementary school boy with his mother, a family with their 13-year-old daughter, and an affectionate couple. My photos were not improving and I became antsy, so I decided to move before Sanders went on stage.

I shuffled towards the edge of the pit near the VIP section, where I paused to look through my viewfinder at the stage. Out of the corner of my eye, I recognized Alex Karpovsky, an actor from the HBO television show, “Girls.” We chatted briefly before Sanders walked onto the stage, Karpovsky’s smile and genuine interest in my photojournalism was encouraging. Jokingly, he offered to take some photos for me since he was clearly much taller and had a better view. As Sanders began speaking I turned towards Karpovsky and said, “I’ll be your friend if I can trade spots with you.” He smiled and allowed me an attempt for a better view. His friends surrounding him were helpful in making room for my cumbersome cameras and backpack, although nothing they did could rectify the fact that I am short.

As I was hopping on my toes with my camera far above my head spraying and praying, a man with kind brown eyes came from behind me and asked, “Do you want a lift?” I looked at him with curiosity, so he asked again, “Would you like me to put you on my shoulders?” Without any hesitation, I said, “Yes!” So I handed Karpovsky one of my cameras and another Bernie supporter my backpack and climbed onto the man’s shoulders!

It was so freeing. Rising above the crowd for the first time, I was able to finally get the shot I so desired. The surrounding crowd laughed at the sight of a photographer sitting on someone’s shoulders.

Logan:
Up close to Sanders, I was able to see every inflection in his facial expression as he spoke with passion.

“We’re going to invest in our young people, in jobs and education. Not more jails, not more incarceration,” Sanders explained.

As my short five minutes near the Democratic candidate ran up, I was escorted away from the stage, once again by Sanders’ staff. I was sure I got the shot.

As everything was wrapping up, I began interviewing Bernie supporters to get a sense of their thoughts on the rally.

Brandon Urbina, a 21-year-old LA resident who voted for the Vermont Senator in 2016, continued to show support for the 2020 primary election.

“All the speakers did a great job conveying the message that Senator Bernie Sanders’ campaign is all about,” said Urbina. “I think California is solidly in favor of him, but I think it’s still nice that he came out here and riled up the base.”

Shae:
As Sanders’ speech ended with, “Let us go forward, let’s defeat Trump, let’s transform this country, thank you very much.” I kindly asked the man to bring me down knowing that I got the shot needed. Upon placing my feet on the ground, the group surrounding congratulated me and I thanked the kind man who generously uplifted me.

Walking away from the pit a woman exclaimed, “You go girl, I’m a photographer too and that’s how it’s done!” Striding away, I had photos worth publishing, new friends and a smile that I will remember forever.