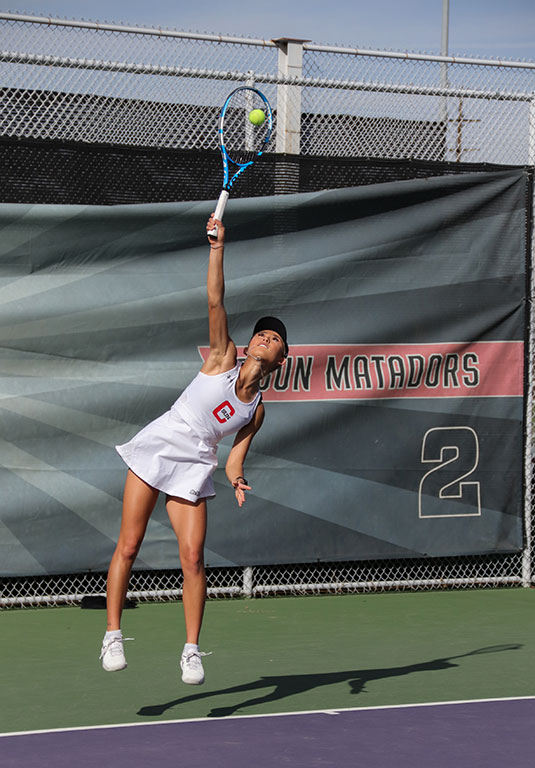 CSUN sophomore Jacquie Tan hits a serve on March 5 against Louisiana Tech in the position 2 match against Ana Jover. Tan lost her match 5-7, 1-6.

The dual was intense all afternoon, with many of the players screaming and jawing off at each other. The Matadors started off with the doubles point. Junior Ekatarina Repina and sophomore Jacquie Tan were the first to win with a 6-3 victory against Claudia Oravcova and Ana Jover of Louisiana Tech.

“This was a very good team that we beat,” head coach Gary Victor said. “They had the University of North Texas beat and then they lost a very close match. North Texas is a perennial top 50 team. We won the big points; I don’t know if we outplayed them as badly as 4-1 may say.”

Coetzee sat out for singles and cheered on her teammates.

“Jolene has an abdominal strain, so she didn’t go during singles play. She did grind it out and play doubles for us so I’m proud of her for that,” said Victor. “There are multiple girls playing through injuries. They continue to amaze me with their grit and toughness.”

“I needed a few games to get going,” Wurst said. “I was down during the first set so I had to just play my game. My opponent started to play flat so once I figured it out, my match went well. It feels awesome to beat a good school like Louisiana Tech, we had a tough tiring weekend last week so with this win, it just feels good.”

Jover defeated No. 2 Tan, 7-5 and 6-1, to give Louisiana Tech their only point of the dual. Tan, who was up 5-2 at one point during the first set, was very upset with the loss after the match.

No. 1 Repina was down both sets but came back to put the Matadors up 3-1 when she defeated Manjon, 6-4 and 7-5. Repina was visibly frustrated many times during the match.

“It was a very close match and very close at the end of each set,” Repina said. “I had to figure out my mistakes and continue to calm myself to win. I’m very emotional on the court but it doesn’t affect me, it actually pumps me up. When I scream it doesn’t mean I will continue to play my worst and not care, it’s the opposite. I will play my best and be pumped up.”

When asked what she screamed, Repina said with a laugh, “I screamed a few times in Russian but it’s better not to translate it.”

No. 6 freshman Victoria Santibañez Luna sealed the win for the Matadors, 4-1, by defeating Oravcova, 7-6 and 6-3.

“I started off really nervous, so my strokes weren’t working, and I had to figure out my opponent,” Santibañez Luna said. “I made smart choices during my match when I was down and was hitting the ball really hard when it was needed. I was trying not to get stuck in one point, if I lost a point it’s okay just move on, reset and start over again.”

No. 3 Fraile Toboso and No. 4 Roenholt went unfinished.

“I really want to emphasize the performances of our freshmen Lisa and Victoria, they both played so well,” Victor said. “If they continue to play like they did today, the sky’s the limit for us.”

Abilene Christian chose to cancel the dual scheduled for March 10 due to the COVID-19 risk. The dual will not be made up.