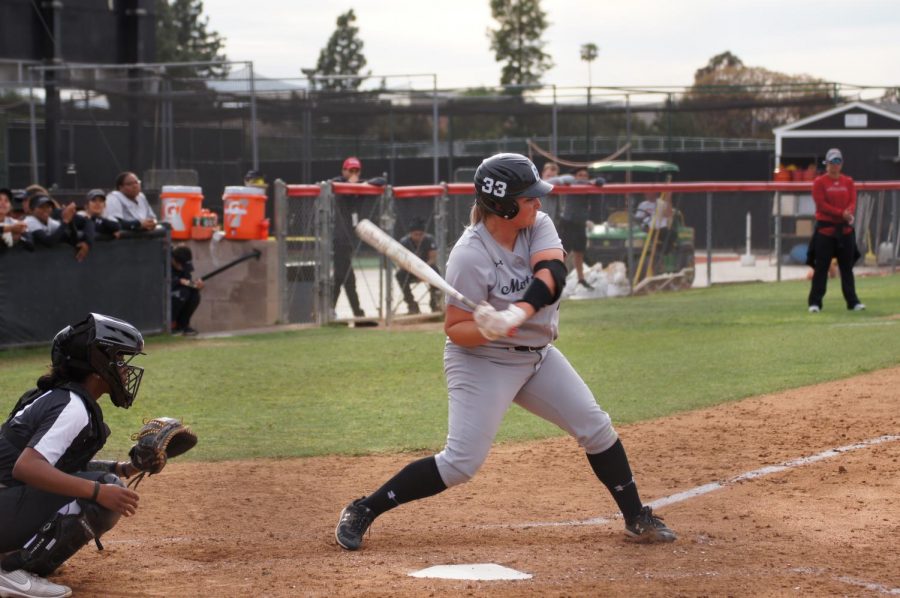 Senior Megan Stevens swings the bat on March 9 against University Central Florida. Stevens went 1-for-2 at the plate, getting one of only two hits by the Matadors in the home opener.

After going 16-7 to begin the season, the CSUN softball team returned for their first home game of the season against No. 21 University of Central Florida on March 9.

“The first pitch from the first inning was I think just all the jitters, all the rush, everybody was just excited to play,” said junior Kenedee Jamerson heading into the game.

The game that was originally set for March 10 was moved to the day prior due to the Matadors’ exhibition game against the U.S. Olympic team in Santee.

Despite the excitement and anticipation of the home opener, the Matadors were unable to score any runs as the UCF Knights defeated CSUN 7-0.

“Not what we wanted in a home opener. Our focus, our effort and intensity could’ve been better,” head coach Tairia Flowers said. “Luckily it’s still early in the season and we can still do some good things but for a home opener and any time you play at home … we’d like to come out a little stronger than that.”

During the third inning, one controversial call garnered a frustrated reaction from the Matadors’ bench, fans and Flowers.

“He made the call initially saying the runner that got hit was safe but I feel like he was still trying to let me know that was the play and didn’t watch the next play,” Flowers said. “I felt our second baseman (Journey Rojas) picked up the ball with her foot on second and got the runner going from first to second out but nobody saw that play so they couldn’t make any adjustments.”

The Matadors finished the game with only two hits and committed three errors. The two hits came from senior Megan Stevens in the first inning and junior Jaymi Steward in the fourth.

Stevens went 1-for-2 with a single, strikeout and was hit by a pitch to start the bottom of the fourth inning. Steward finished 1-for-3 with a strikeout and groundout.

Three pitchers were in the circle for the Matadors throughout the game beginning with junior Jillian James and ending with sophomore Elise Madison. In the third inning with the bases loaded and one out, Jamerson came in to pitch and only gave up four hits and one run in her 3.2 innings.

“I thought KJ did a good job,” Flowers said. “Obviously there was the first hard hit, but she got us ground balls and let us turn the double play and get things going after that. Then her herself the next few innings, took care of the ball. She did a good job coming in.”

The mindset for Jamerson was to keep the ball down, make them hit ground balls and getting her team some outs.

“I just kept going pitch by pitch. Coach Sheridan and I have been working a lot on just attacking one individual pitch and staying focused for that one pitch,” Jamerson said.

James pitched 2.1 innings with five hits, six runs, two of which were earned, gave up two walks and one strikeout. Madison pitched the final inning giving up one hit and recorded one strikeout.

As the home schedule continues into the weekend, Flowers wants to ensure that the team works on what they need to and gains the momentum they would like as they progress through the season.

Due to inclement weather in Santee, the exhibition game against the Olympic team for March 10 has been canceled.

The Matadors’ next game will be on March 13 against the DePaul University Blue Demons as part of the CSUN/Loyola Marymount Tournament at 12:30 p.m. at the CSUN Softball Diamond.