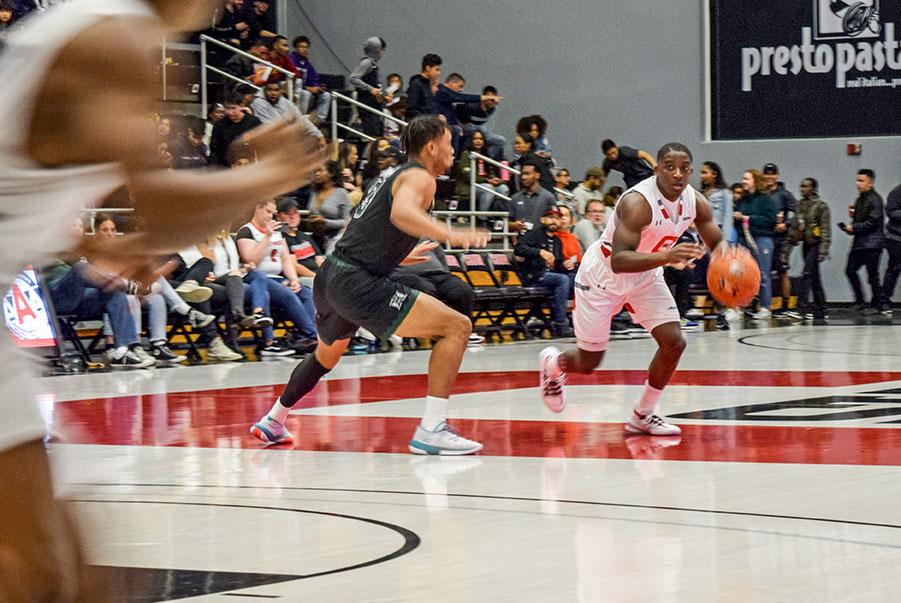 The NCAA announced that the 2020-2021 basketball season will begin this November.

The Matadome held its collective breath on Saturday night when junior guard Terrell Gomez and sophomore forward Jared Pearre fell to the floor while trying to defend a layup midway through the second half of the men’s basketball team’s regular season finale against the University of Hawai’i. Pearre appeared dazed while Gomez was grabbing his knee and appeared to be in pain. Both players were able to eventually walk off the court with Pearre sitting on the bench and Gomez heading into the locker room.

The Matadors were fighting for the second seed in the upcoming Big West tournament but the possibility of losing Gomez, one of the team’s biggest leaders, would have been arguably an even bigger loss than whatever the result on the final scoreboard was. With just over 10 minutes left in the game, however, Gomez emerged from the locker room and checked back into the game as the Matadome roared.

“I kind of felt like Paul Pierce,” Gomez said with a chuckle. “It was cool though. I appreciate the crowd, I just hope they continue to show up like that every game.”

Gomez proved why he is such an invaluable part of the Matadors’ core as he proceeded to score eight points down the final stretch, including two free throws in the final two seconds to ice an 86-82 victory over the Rainbow Warriors and secure the coveted No. 2 seed in the Big West Conference tournament.

It was a game of streaks for both teams as they each traded buckets like two boxers in the middle of a ring. Sophomore Darius Brown II got the first points of the game for the Matadors and sparked an early 6-0 run that was capped off by a flashy dunk from fellow sophomore Lamine Diane. The Rainbow Warriors’ offense immediately woke up and went on a run of their own and took a 6-8 lead after Samuta Avea drained a three-pointer.

The lead would change hands a total of seven times with four ties before the Matadors ended the first half on a 9-0 run to tie the game at 47.

“I didn’t think we played great in the first half,” head coach Mark Gottfried said. “We gave up I think it was seven threes in the first half. The key was going to be if we could limit that in the second half … we just gave up too many points.”

The Rainbow Warriors shot 50% from beyond the arc in the first half and much of that was because of guard Eddie Stansberry, who lit up CSUN for 18 points and four threes in the first half. He finished the game with 33 points and seven three-pointers, as many as CSUN’s team total.

The second half would be the same tug-of-war that the first was, as Justin Hemsley and Gomez traded baskets on their first possessions of the half. Diane shared the load offensively and was dominant on defense as he tied a school record with six blocks in the game, five of them coming in the second half. He also moved into ninth place on CSUN’s all-time scoring list with a 34-point performance on Saturday, putting his career total at 1,304.

“It feels good but at the end if you do all this and don’t win the game, it doesn’t make sense,” Diane said. “We always come to win the game, so that’s the most important thing.”

The Matadors will enter the conference tournament as the second seed on a four-game winning streak, their longest of the season and a far cry from their nightmare 0-6 start in November. They will play the No. 7 seed Cal State Fullerton Titans at noon on Thursday, March 12 at the Honda Center in Anaheim.

“We always talk to our team about being at our best in March,” Gottfried said. “Nobody remembers how you start, they always remember how you finish … we’re excited. We’re not overconfident by any means, but I do think we have confidence that we can go to Anaheim and hopefully win that tournament.”