Grocery shopping during the first weekend of the COVID-19 pandemic 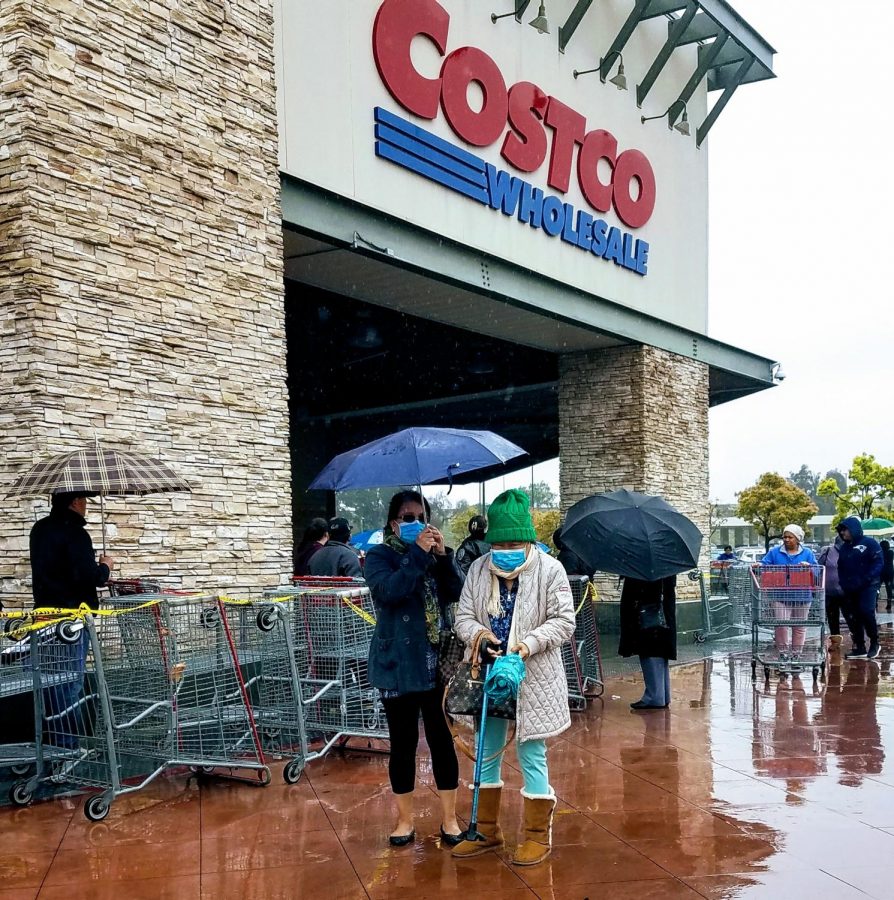 Two customers stand outside of the Costco located on Paxton Street in the San Fernando Valley neighborhood of Pacoima on March 13. Customers had to wait long lines in the rain just to enter the store.

Friday the 13th of March couldn’t have felt more apocalyptic than it did this last weekend. I don’t see myself as someone who is superstitious, but this is one day that truly felt as if luck was set to run out. The night before, my mom and I had decided to go grocery shopping before things “started running out.” By then, COVID-19 had become more than just a virus rapidly spreading in other parts of the world. It was here, and it may have already been spreading near or in our communities.

The day before, CSUN had sent out an official email letting its students and staff know that it would transition to virtual learning until April 19. I had also received an email from a professor with the subject line “panic buying – whole foods DTLA 12 Mar 20.” The photo displayed a set of empty shelves at the grocery store. That was the exact scenario in most stores across Los Angeles. However, experts have said that grocery stores will continue to be fully stocked throughout the duration of the city’s lockdown.

On Friday my mom and I made our way to the nearest Costco which was about three miles east from us, in the neighborhood of Pacoima. Usually it would take us about 15 minutes at most to get there, but this time there was much more traffic the closer we got. At first I thought it may have been an accident due to the rain, but in the long row of cars ahead of us I could see they were making their way into the Costco parking lot.

Eventually we found a parking spot and walked to the entrance of the store only to encounter a border of carts with yellow tape forming lines for people to go inside. There were at least three officers organizing the flow of movement in and out of the store. Usually you can just grab a cart and go in, but this time you had to wait to enter the store.

One of the security guards pointed towards a Best Buy at the opposite end of the plaza. The line of people waiting to enter Costco stretched that far, along the perimeter of the plaza, forming half a circle. It was drizzling and my mom and I thought that if we didn’t get in line then, it would be the same way everywhere else, but at least here we could buy in bulk.

Like many people our rationale stemmed from the need to bulk up in case of an emergency, like that of stores shutting down completely, “out of an abundance of precaution” as many official statements said.

But my mom and I were there to do our usual shopping at the end of every other week to buy certain items to have readily available at home, to avoid spending time outside when we could cook our own meals and save up. Especially now, it seemed like a good idea. And though the line to get into the store was long, it moved quickly.

In front of us, a mom and her young daughter were in line as well. If things were normal she would be at her elementary school. I asked myself, what will communities and institutions do in order to make up for lost time in classrooms? Colleges and universities are enforcing virtual learning, but many public schools don’t have the capacity to do so for high school, middle school or elementary students. For people in their late teens, how would this affect our perception of diseases, responsibility amid chaos, and even our creativity?

Now more than ever we will know what two months of public education is worth, what one day without work is worth, what it’s like to stay at home and depend only on what people on screens “advise” you to do, what decadence feels like, and being on the edge hoping something worse doesn’t happen next.

The same security guard that pointed us to the end of the line walked the long line about 15 minutes later, shouting that Costco had officially run out of toilet paper and water bottles. We had actually come to simply get one package of toilet paper. The intention was to buy essentials, considering others’ needs in mind.

But I am sure many people grabbed three packages or more in the previous weeks. They are not to blame, but for those who may have hoarded simply because they saw other people doing so, I hope they correct such selfish behavior immediately, because it does have severe consequences in spite of officials saying stores will remain fully stocked.

Inside the store we also had to get in line for another 15 minutes to grab other items like disinfectants, milk, eggs and diapers — which they had also run out of. Thankfully, there was still an abundance of foods that we were able to get without a problem. We bought enough to live for the next two weeks or so.

After spending three hours just to go grocery shopping we came back home and by night time I began feeling symptoms of a sore throat from standing in the rain so long and having cold drinks. Although I can assure you I don’t have COVID-19, since I haven’t had a fever nor a dry cough, I’m not planning on going outdoors for at least the next week.

The constant rain didn’t make it easy to get through the first weekend. Even though bars and shops were still open, it’s not like there was much of an incentive to go out. On Sunday, I watched the last presidential democratic debate before the official elections in November. And even though both candidates were asked about what they would do about COVID-19, unfortunately they are not able to do much at the moment. Instead, it is in the hands of the current Trump administration — an administration that has not responded effectively to the dangers of the virus.

I hope that they won’t take advantage of the situation to impose policies and laws that will further hurt communities across the country and disguise them as excuses to keep people safe from the virus. We can’t let that happen.

For now, all that can be done is to keep isolated, channeling love for one another through virtual modes of contact. Let’s look to the future with optimism, look within and create something new — especially for those in solitude — with good intentions in spite of every possible physical human interaction being postponed or canceled. Soon enough, we will hold hands again.