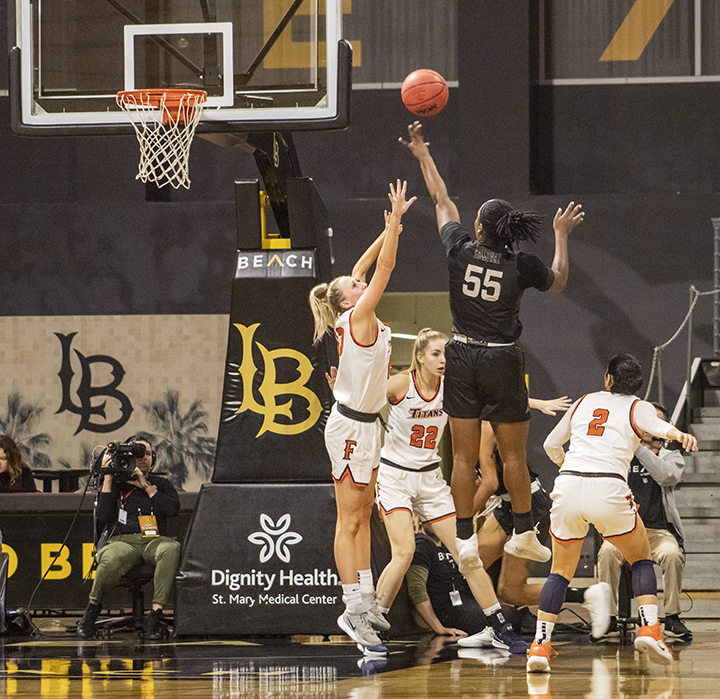 CSUN’s forward De’Jionae Calloway goes up for a shot against Cal State Fullerton on March 10 in Long Beach.

While COVID-19 continued its worldwide tour, the CSUN and Cal State Fullerton women’s basketball teams put on a performance of their own in front of a collection of media members and 4,000 empty seats.

This was no typical contest, though. It was the first leg of the Big West Tournament with circumstances that were not too foreign to the Matadors.

“I’m a coach so I don’t have any fans,” said head coach Jason Flowers with a wry grin. “So it didn’t affect me at all.”

Before he could continue, junior guard Meghann Henderson leaned onto his shoulder and chuckled.

“We don’t get a lot of fans when we’re at home either,” said Henderson as she relaxed back into her chair in laughter.

It was a rare moment of levity for the Matadors on a night where a familiar atmosphere bore witness to an unfamiliar result: the first CSUN loss to Fullerton in women’s basketball since 2011.

After 19 consecutive triumphs over the Titans including a regular season sweep, the Matadors were blown out of the Big West tournament by a hungry Fullerton squad, 67-52.

“I think they outworked us,” said Henderson, who led the team in points scored (15) and minutes played (39). “They played a little bit harder than us, especially defensively, crashing the boards and hustling for loose balls.”

The beginning of the game was promising. CSUN went to a zone defense early where they used their size to disrupt Fullerton’s drives to the rim. On the other hand, sophomore guard Jordyn Jackson and senior guard Hayley Tanabe penetrated the Titans’ defense without much resistance and created space for Henderson to find her three-point stroke.

The Titans began to figure out the zone defense as the quarter wore on, utilizing redshirt junior Taylor Turney in the high post to take advantage of the weakness in the 2-3 zone with uncontested jumpshots.

“We practiced our zone offense a lot this week,” Fullerton head coach Jeff Harada said.
“Knowing we were going to play Northridge, they’re a physical team with their zone defense and I thought we did some good things with that.”

The pace of the game picked up dramatically to begin the second quarter as Fullerton sought to utilize their superior depth to tire the Matadors out. CSUN ranked near the top of the Big West leaderboards in defense, but Fullerton was running them out of the gym, necessitating a switch to man-to-man. The adjustment halted the Titan surge but they went into the half trailing by three.

Big West Player of the Year Raina Perez was held to three points on 1-for-7 shooting in the first half for the Titans which represented the struggle from behind the arc for both teams, who went a combined 4-for-18. Perez still contributed as a playmaker, recording more assists (six) than the entire Matador squad (five), but it was only a matter of time before she would find her touch.

The pace dissipated to begin the second half while CSUN went back to a 2-3 zone. Sloppy offense in the halfcourt setting from both sides contributed to a brief stalemate in the scoring department before the Titans decided to run again. Led by a rejuvenated Perez and the shooting of Turney, Fullerton ran through the Matadors in a dominant third quarter.
While the excellence of Perez was anticipated, Flowers identified Turney’s effort as the main difference between the regular season matchups with the Titans from the tournament.

“If you look at the first two games that we played against them — at our place, (Turney) was limited,” Flowers said. “She wasn’t really effective, she turned the ball over a lot. We played them at their place the last game and I don’t think she scored a point. Then she comes out tonight and has 27 points.”

Meanwhile, CSUN started to force things in an already stagnant offense leading to turnovers and rushed shots. Henderson accounted for all of the three-pointers made for the Matadors as they sputterted to the finish line of the 2020 season.

“Hats off to (Harada), his kids and his staff,” Flowers said. “Obviously they did a really good job tonight … but really our young women showed character throughout our season for a lot of different reasons. Our seniors leave here as champions, leaving a mark on our legacy with our program. Not only on the floor but also, all four of them are really high academic kids who represent our program well on and off the floor.”

The Matadors’ 2020 season concludes with a 12-19 record and a seventh place finish in Big West standings.