All for the love of tennis 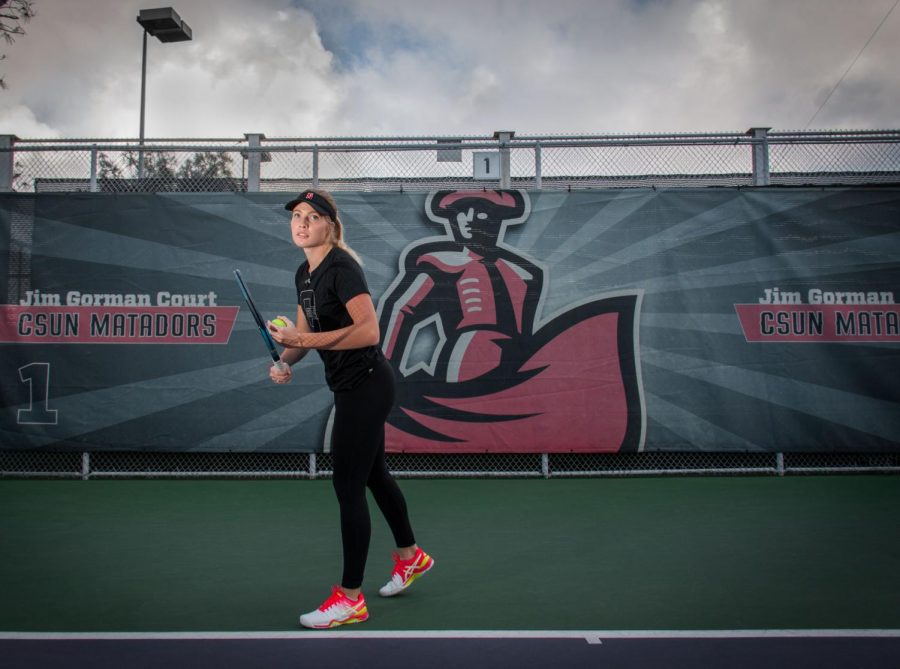 Ekaterina Repina practicing on the No. 1 court at the Jim Gorman Courts on March 11.

From Voronezh, Russia to Serbia to the United States — Iowa and finally to California — Ekaterina Repina has been traveling her whole life for her love of tennis.

“When I was a kid, I always had a lot of energy and always wanted to play sports,” Repina said. “My parents knew a friend who recommended me to play tennis. I started with badminton and then I started playing tennis. Once I played tennis, I really enjoyed it and I knew this was for me.”

She lived in Voronezh for 10 years before moving to Serbia to attend Rudjer Boskovic High School.

“I feel like in Russia, they put more pressure on you as a player,” Repina said. “They make you practice six hours a day (even if you are nine years old) and make you run until you throw up. It is very intense. The pressure is a lot and that is why players in Russia get hurt. I didn’t like the environment and that is why I left for Serbia.”

Repina ranked first in Serbia in 2013 and 2014. In 2016, she was ranked 591st by the International Tennis Federation among world juniors.

By the time she was 15 years old, Iowa State offered to sign her, and she accepted. As a freshman, Repina recorded 28 wins, finishing 13-15 in singles and 15-18 in doubles. She was on the Academic All-Big 12 Rookie Team and Big 12 Commissioner’s Honor Roll.

As a sophomore, Repina went 7-11 in singles and 5-10 in doubles and was named to the Academic All-Conference team. She earned an upset victory over No. 123 Bojana Markovic of Texas and was crucial in the school’s first win over the University of Nebraska since 1995 during the 2019 season, defeating Marina Cozac.

“Iowa State was the first school to offer me something, so I jumped at the opportunity because I liked the coach,” Repina said. “I really liked the tennis program and the school but there was a coaching change and it changed the atmosphere, so I left.”

While she was a freshman at Iowa State during the 2017-18 season, Repina attended the CSUN Fall Invitational. Her experience at the dual was so good that when she left Iowa State, she wanted to transfer to CSUN.

“When I played at the invitational, I remembered the courts, the university, and the environment, so I contacted the coaches,” Repina said. “The coaches showed me videos of everything, and they seemed interested in me, so I decided that was where I wanted to go.”

Repina laughed when she was asked if she likes California.

“I really like California, it’s much different from Russia and Iowa. There really isn’t a winter season,” Repina said. “I sometimes miss the cold winter but not so much because the wind in California makes up for it. I enjoy the food here and the culture.”

Head coach Gary Victor is very happy to have Repina as a Matador.

“Kat is one of the fastest and most competitive players we have ever had. She competes so hard for everything,” Victor said. “Kat never takes a point off, and that is something they said about Nadal, which that type of character is so important. She sometimes gets a little hard on herself but she fights through it and just doesn’t stop fighting. She is a great and special student athlete.”

“We were thrilled when she decided to come here because we thought the best tennis was ahead of her,” Victor continued. “She is a great teammate as well. We are very blessed to have her.”

If COVID-19 did not shut down the tennis season, Repina was on her way to having her best season yet.

“I wanted to make the best out of my last years of playing in the college tournaments. It was very frustrating to find out about our season being canceled because I was looking forward to the conference matches,” Repina said. “Our team had a really good start and it’s sad that it all finished so quickly.”

As the No. 1, she led the team in singles victories with a 6-1 mark, only losing to University of the Pacific’s Kiara Kosan who was nationally ranked in a close match. After her only loss, she won her final four matches, all in straight sets. Repina was also tied for doubles wins with teammate Ana Fraile Toboso, with five wins.

Playing at the No. 1 slot is something Repina has wanted for a while.

“That was my goal for some time, because even in the summer when I was training, I was always striving to be the best. It always motivated me,” Repina said. “I get very devastated if I lose. So that’s something for me that I really wanted. When I played in Iowa, I would play like No. 2, 3, and 4 so it would always vary but I would never play No.1. It is always something I wanted to accomplish. And I did it.”

In addition to being a great athlete, Repina is an exceptional student. She pulled a 4.0 while being a student-athlete and was on the Nazarian College Dean’s List. Her major is business management and she chose it because she can use it all over the world.

“I was really interested in sociology and journalism, but those professions aren’t very suitable in Russia. It was just better for me to do business,” Repina said.

With her junior year and tennis season over because of COVID-19, Repina looks forward to her senior year.

“It is kind of crazy to think it is already going to be my senior year because it feels like I was just a 16-year-old freshman, it’s overwhelming,” Repina said. “I just want to do really good in my tennis season and take advantage of every tournament and every game. I want to get closer with the new girls that are going to be on the team and be a leader, I want a great atmosphere for my senior year.”

After college, Repina wants to go to Russia but going pro is the ultimate goal.

“I would like to try professional tennis, which has been my goal since I was a little girl and I don’t want to waste it,” Repina said. “I just want to try. If it doesn’t work, it doesn’t work. However if I continue my hard work, I might have a shot.”