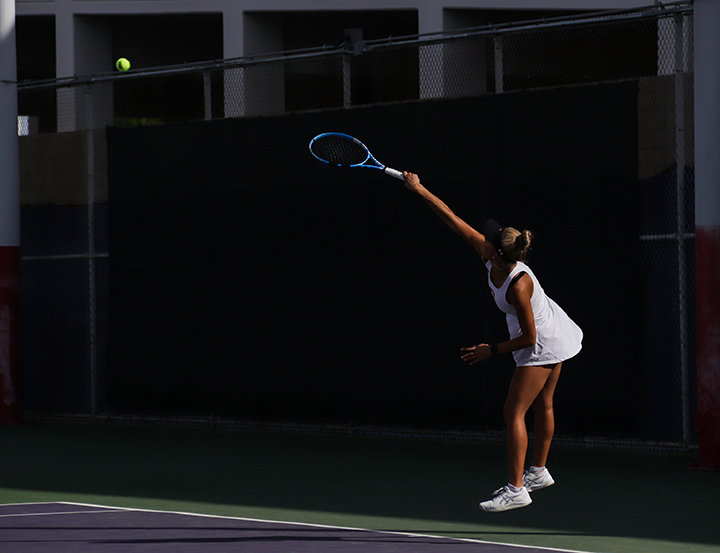 Women's tennis season begins on Tuesday after the spring season got cut short last spring due to COVID-19.

On March 12, the Big West Conference announced that it was canceling all spring conference and non-conference competition, effective immediately.

“The Big West Board of Directors today moved from indefinitely suspending to canceling all spring conference and non-conference competition and championship events for the 2020 season. This action was taken following yesterday’s NCAA announcement below canceling all 2020 spring championships,” according to the press release on their website.

“Obviously, we all are disappointed that the season has been canceled,” head coach Gary Victor said. “However, this is a global pandemic that is growing by the hour and the health of our community, student-athletes, and everyone involved is of the utmost concern.”

Women’s tennis was off to a great start this season and was going into Big West play strong, going 6-2 before the cancellation. Their two losses were to the University of Alabama and the University of New Mexico, to which the Matadors were short-handed as they were missing two of their best players.

A few players were contacted via email to express their thoughts on the season being canceled.

Emma Roenholt, the lone senior on the team, was tied for third on the team in victories.

“I’m really proud of everyone on the team. We were off to an amazing season which unfortunately ended way too soon,” Roenholt said. “We have to be grateful for the fun and exciting moments we had and I, especially as a senior, am very proud to have represented CSUN for the last four years. I’m excited to see what this team can accomplish in the future!”

Roenholt did not comment on the possibility of an extra year of athletic eligibility that is being discussed by the NCAA.

Junior Ekaterina Repina, led the team in singles victories going 6-1, only losing to University of the Pacific’s Kiara Kosan who was nationally ranked, all from the No. 1 slot.

“It’s my junior year already, and I wanted to make the best out of my last years of playing in the college tournaments,” Repina said. “It was very frustrating to find out about our season being canceled because I was looking forward to the conference matches. Our team had a really good start and it’s sad that it all finished so quickly.”

Sophomore Joelene Coetzee had the second most victories on the team, going 5-2 while playing at the No. 1, 2, and 3 slots.

“It is very unfortunate that our season got canceled because training and matches are the best part of my days,” Coetzee said. “I look forward to competing and training again with my teammates and working hard together.”

Sophomore Ana Isabel Fraile Toboso was tied for the team lead in doubles wins and went 4-3 in singles.

“I think that the season’s cancellation is very sad news. We were doing pretty well during all the matches that we played,” Fraile Toboso said. “All of us were very excited for the rest of the season and for the conference tournament. We were working really hard and believing in our chances to win the conference this year. Right now, it is hard to assimilate that the season is already over, but the most important thing is being healthy and safe. We are already looking towards next season, to come back even more excited and ready to fight and work hard.”

Sophomore Jacquie Tan was tied for third on the team in victories with Roenholt and went 4-2 in doubles.

“I am definitely disappointed that our season had to end this way,” Tan said. “Our whole team has prepared and worked so hard this whole season, and to have all of our upcoming matches canceled really hurts. Nonetheless, all NCAA sports have been on hold, but I am excited for the fall season to start because I’m going to be back doing what I love most.”