The Marathon Continues, One Year After Murder of Nipsey Hussle 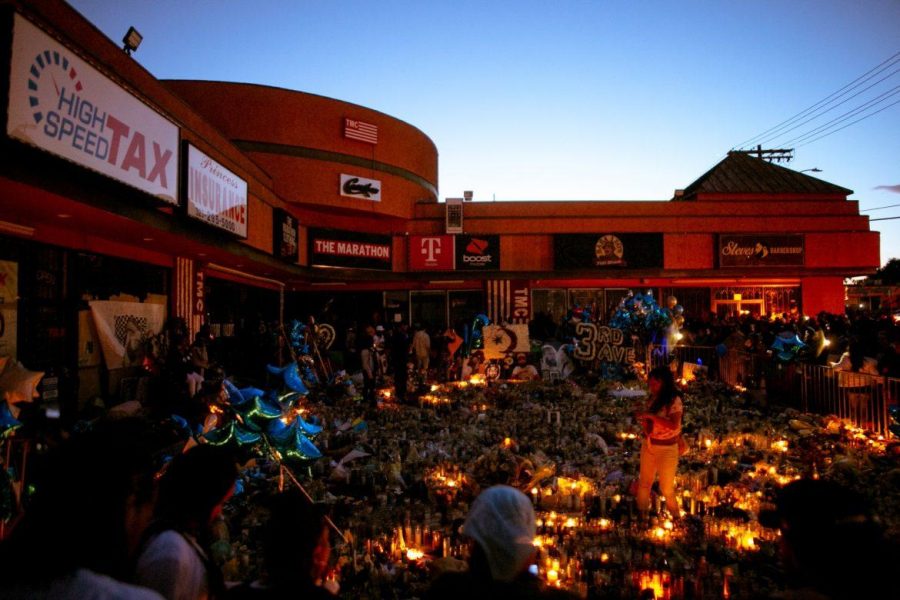 Nearly a year ago, people gathered outside of Nipsey Hussle's clothing store, The Marathon, after memorial services for the murdered rapper on April 11.

Rapper, entrepreneur, and philanthropist Nipsey Hussle was killed on March 31, 2019 in the Crenshaw District of South Central Los Angeles. To commemorate the one year anniversary of his death, Sundial Sports Editor Andres Soto and Opinion Editor Michaella Huck reflect on the events that occurred that day and the impact Nipsey left on them.

The night of his passing, I met up with a longtime friend of mine. We smoked while looking at the LA skyline in the distance as “Hussle and Motivate” played through his phone speaker. I somehow found the words to explain how badly Nipsey’s death hurt me despite still being in a state of disbelief.

“I feel like I just lost a family member,” I remember saying.

My friend explained that we feel connected to artists like Nipsey because we see such a personal side of them through their art, we end up feeling as if we know them personally. But for me, it was deeper than that.

Nipsey Hussle represented what I strived to be. “The Marathon” was his mantra. He preached about not letting your setbacks derail your goals, which resonated with me during a time when I flunked out of a four-year university and had to start my college journey over at a community college. Nipsey inspired me in a way that no one else could, and all of a sudden he was gone.

I keep thinking I’ll see an inspirational tweet from him while scrolling down my timeline or that he’ll tease an unreleased song on his Instagram, even though I know that won’t happen.

Even though he’s no longer here, Nipsey’s presence isn’t going anywhere. He is inseparable from LA — not just as a tragic martyr, but as a symbol and example of a rose that grew from concrete. We keep Nipsey’s memory alive by making every day count and by working towards becoming the best version of ourselves no matter what obstacles get in our way.

In the song “Who Detached Us” off his 2011 mixtape, “The Marathon Continues,” Nipsey sampled a portion of Steve Jobs’ 2005 Stanford Commencement address on death that now sounds ominous, but also gives us a departing gem.

“Your time is limited, so don’t waste it living someone else’s life,” Jobs said at the end of the track. “And most important, have the courage to follow your heart and intuition. They somehow already know what you truly want to become.”

Hip hop has lost too many greats to acts of violence and travesty. I never thought Nipsey would be one of them. I remember seeing the raw footage of the shooting, I cried and I cried and so did every other LA native who knew his story.

“Why was he so important, why are you all so hurt?”

Outsiders didn’t understand the impact until it was much too late.

My reaction was anger. I was raised bumping his mixtapes, and people who questioned his importance made me sick. The man who advocated for change in the community, the man who just wanted to see my people succeed, died at the hands of the very thing he was fighting against.

I think that’s what hurt me the most. This man died a warrior for the city he loved so much. Many people didn’t understand and it wasn’t my job to explain it so I showed little emotion following his death.

While today, people recognize the impact he left for us, I’m ready to answer that question on my own: Nipsey Hussle was socially and economically the individual every young Black kid in LA wanted to embody.

Growing up as a marginalized individual in Southern California, you realize at a very young age that socioeconomics and skin color run parallel. Gangs are often resorted to in areas where people feel like no one has their back.

Nipsey echoed this ideology in his popular song, “Blue Laces”: “Pops was gone, moms was never home / The street was there and they took you as their own.”

It’s well known that Nipsey was a member of the Rollin’ 60s Neighborhood Crips. The picture painted by the mass media shows that these gangs go to war over colors and territories. This is not why these gangs came into existence and what they became is a product of the environment and situations these people are put in. Nipsey advocated for these gangs to go back to their origins as protectors of the hood.

“Know some Inglewood n***** showed a Crip love / He was like that n**** Nip kinda sick blood / Know them east side n***** bang my sh** tough, it’s all of love / Even to my homeboys that switched up.” Hussle was known for lyrics like these that uplifted the community and called for unity between gangs.

Not only did he advocate for change, he created it. He made more than enough money to get out of the hood and never look back, but he wanted to rebuild and better the community he represented. He met with congressional leaders, he created spaces where kids in his city could learn without distraction. He was a visionary.

On March 31, 2019, a beautiful young brother was taken from not only the city — he was taken from his children, from his siblings, and from his parents far too soon. However, let’s not use his death to define his legacy. Let us remember him for who he was — a man who excelled in every business venture, a man that loved his family, he was a man that never forgot about the streets that made it. Nipsey started on West Slauson Avenue and Crenshaw Boulevard, and he was taken from us on the same block.

Let’s use his death as an example and finish the legacy he left behind.

The marathon will forever continue.