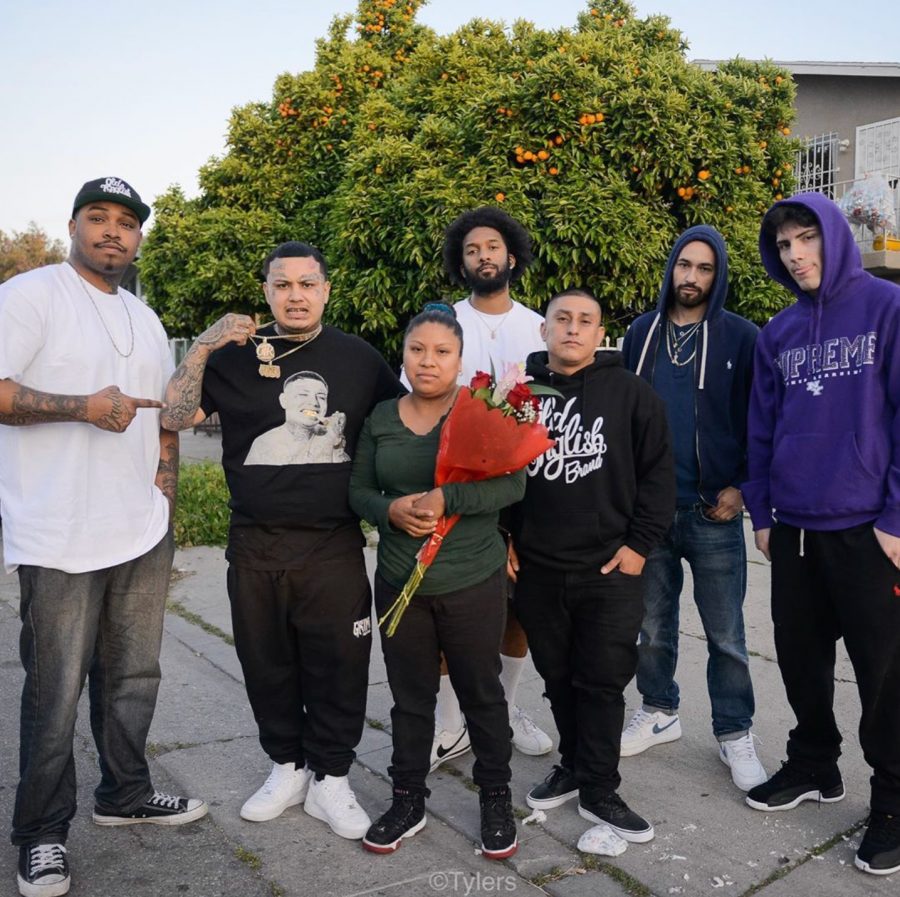 From left to right: El Memo Blaxicano, Swifty Blue, Kissed Killed (in the back) Lucia Guerrero, Jimmy Diaz, and V Lok met up with Lucia Guerrero across from a police station, standing in solidarity with her after her shop was robbed.

Over the past weekend, a video shared on social media showed two men assaulting Lucia Guerrero, a street vendor, in broad daylight. The vendor was preparing corn while the assailants were waiting for the right moment to attack.

One of the attackers wearing a white jacket went behind Guerrero and put her in a chokehold, while the other attacker wearing a blue sweater stole the money from her fanny pack. They then fled in a vehicle, which had five other people inside.

The incident occurred on 92nd and Figueroa Street in Los Angeles. The video went viral and was shared on social media by multiple users.

Jimmy Diaz, owner of a clothing brand called “Old English Brand,” was one of them. For Diaz, it felt almost personal because his aunt experienced something similar.

“My aunt has been assaulted. She owns a liquor store and I felt like that was her,” said Diaz. “It was my family, so you know, especially street vendors, they are part of our community where we grow up buying from them all the time.”

Swifty Blue, a rapper from Paramount, became aware of the attack after being tagged on social media by his followers. Blue posted a video on his Instagram page while he was on his way to meet up with Guerrero. He said he was going to bless her by financially supporting her with $1,000.

Before meeting up with Guerrero, Blue said she didn’t want to meet up with him because she was skeptical. Instead, she sent him a link to her GoFundMe page if he wanted to donate. But Blue wanted to interact with her in person.

“She didn’t want to meet up with us, we had to meet up at a police station because she’s scared,” said Blue. “We wanted to give her that peace of mind.”

Guerrero showed up at the location by herself. Blue met up with her and she was hesitant to approach him. In the end, she accepted Blue’s support. Diaz, El Memo Blaxicano, rappers like KissedKilled, V Lok, and other people also arrived at the location to give her financial support and flowers.

Guerrero then felt comfortable explaining her traumatic experience with them. She thanked them for their support and said, “May God bless you.”

Guerrerro and many other street vendors continue to work even though they’re at risk of being exposed to COVID-19 — for them, this is their only source of income to support their families.

Guerrerro currently has a GoFundMe page and over 400 people have donated in just two days. Through the support of the community, she was able to surpass her goal, which was $10,000. As of March 31, $10,209 has been raised by 425 donors.

“If not us then who, then us it is @swiftyblue @elmemoblaxicano @kissedkillied linked up to make sure the Elote Lady knows the community has her back,” said Diaz on his Instagram post.