COVID-19 by the numbers in Los Angeles 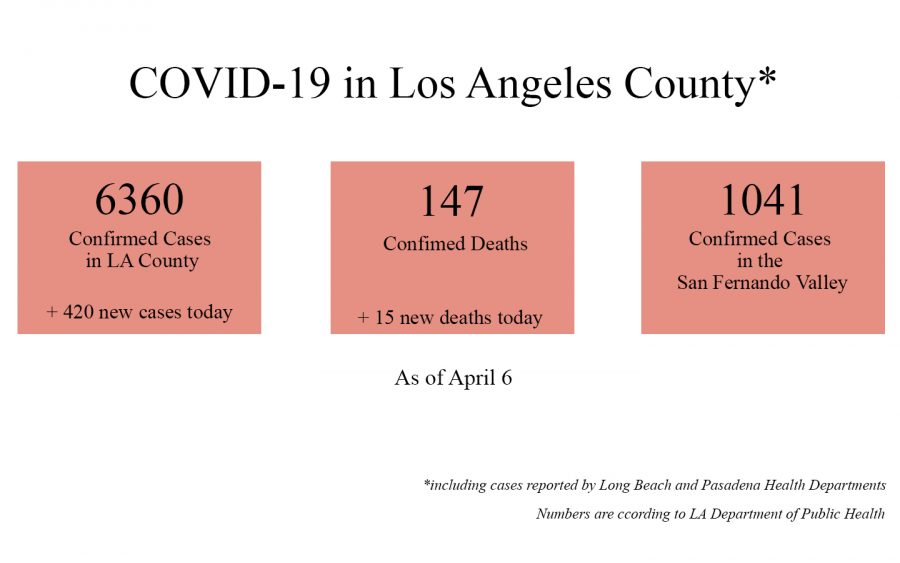 Los Angeles County has been the epicenter for COVID-19 spread in California. As of April 6, LA County has the highest number of confirmed cases among all of California’s counties, according to the California Department of Public Health. However, LA County also has the greatest population at roughly 10 million residents.

Health officials continue to talk about “slowing” or “flattening the curve” to relieve medical officials, hospitals and supplies from being overburdened. Below is a visual representation of confirmed cases in LA, starting from March 1.

LA is beginning to see the upward swing of the curve, as the first confirmed death in LA was just one month ago.

Officials are urging the elderly to take extra precautions due to the high risk that COVID-19 poses to them. Despite the heightened risk for the elderly, data shows that all demographics are susceptible to the virus.

COVID-19 in the San Fernando Valley

Here are the number of cases in the San Fernando Valley cities and neighborhoods, according to the LA Department of Public Health:

Here is a map of COVID-19 testing locations. Please note that most locations require appointments that need to be booked ahead of time. Be sure to contact centers before visiting. To find out more details about some LA County testing options, check out the LA County testing information website.

The COVID-19 outbreak has impacted the social and economic status of LA. Pursuant to California Governor Gavin Newsom’s “safer at home” order, all non-essential businesses closed their doors indefinitely last month in an effort to flatten the curve of the virus.

“We want to let people know that we are serious about this, that businesses that flagrantly violate this will be shut down short term and prosecuted in the medium term as well,” LA Mayor Eric Garcetti said in a press conference on April 2.

Bars, gyms, retail businesses and dine-in restaurants are examples of workplaces that have completely ceased operations until further notice. Public access is permitted to many local hiking trails, including Griffith Park and Runyon Canyon, to enforce social distancing protocol.

On March 27, the LA Department of Public Health announced the closure of all beaches, piers and coastal access points until April 19 at the earliest.

Law enforcement and various government programs remain open\; however, judicial court hearings have been postponed as gatherings of over 10 individuals are currently prohibited.

Small businesses that have been forced to temporarily shut down are eligible to receive between $5,000 and $20,000 in loans from a new “Emergency Microloan Program” introduced by the city government. Applications and additional loan information can be found on the Economic & Workforce Development Department’s website.