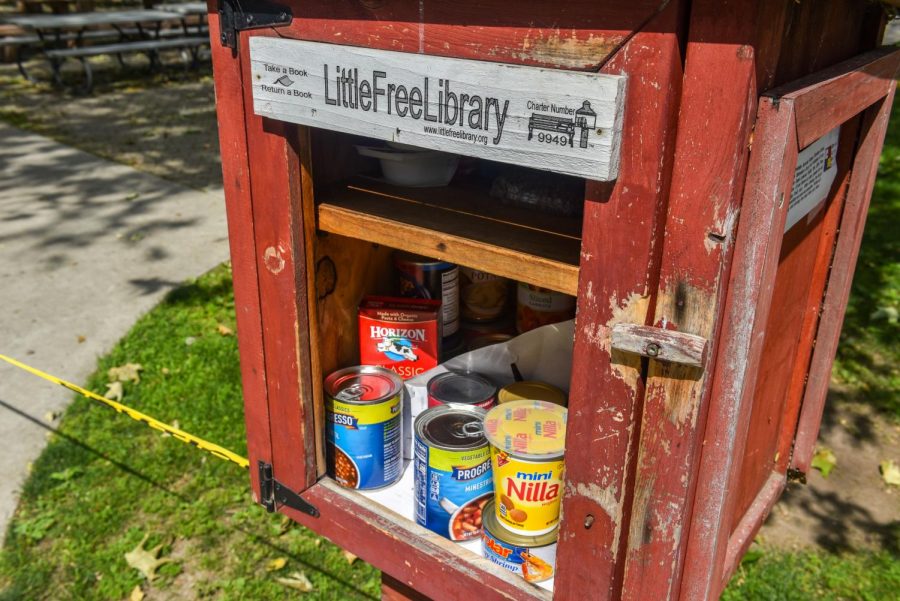 The same cold October night that the Los Angeles Dodgers played a World Series game in 2017, Jennie Quiñónez-Skinner volunteered for a Dia De Los Muertos event in the city of Glendale.

The event turned out to be an unprecedented success and served as a launching pad for Quiñónez-Skinner’s continued community service in Glendale.

Quiñónez-Skinner, who is a librarian at the Oviatt Library, is now helping to provide free food to Glendale residents.

Quiñónez-Skinner is also the board president of the Glendale Latino Association. Through GLA, she is helping stock small pantries around the city of Glendale.

Take what you need and share what you can is the motto for our little pantry around the City of Glendale. In partnership with Glendale Sunrise Rotary, Kiwanis Club of Glendale CA, and Glendale Latino Association we are united to serve our community. Visit www.glendalesunriserotary.com to see the locations of these little pantries. Thank you Kiwanis President Randy Slaughter and Glendale Sunrise Rotary President Alex Parajon for helping us keep all 10 locations filled. Also a little #CSUN #matatude

A post shared by Glendale Latino Association (@glendalelatinoassociation) on Mar 27, 2020 at 2:53pm PDT

A fellow member of the GLA board, Juan Guillermo, came up with the idea of temporarily repurposing the city’s Little Free Libraries as pantries. Guillermo is a librarian at Glendale Library Arts and Culture.

The Glendale Sunrise Rotary Club operates the Little Free Libraries, which are post boxes where people can drop-off and take books, located at Mayor’s Bicentennial Park, Glorietta Park, Montrose Park, Verdugo Park and Glendale City Hall. The rotary club teamed up with the GLA to convert five of the little libraries into food pantries.

The two organizations had to ask the city for permission to make the temporary switch. Since some of the libraries are owned by private residents, they also had to get the residents’ approval. Quiñónez-Skinner said the residents were quickly on board with the idea.

“I’ve spent like $80 myself and I’ve had about 4-5 people drop boxes off,” Quiñónez-Skinner said.

Stocking the pantries requires a specific process due to COVID-19. She cleans and sterilizes the packaging of the products with natural cleansers, such as vinegar.

Quiñónez-Skinner also has a process for receiving donations.

“The easiest way to do it is dropping it off in the alley I live by, and then I’ll clean it and drop it off at the little pantry,” she said. “The majority of people want to help and we have a lot of generous people that want to give back and be engaged physically. One of the biggest challenges has been the desire for people to be together and connected.”

“I would really like to emphasize the team’s effort,” she continued. “This is something I do on my lunch break and something I enjoy doing as a project. It is teamwork.”

Quiñónez-Skinner said that people have also donated supplies and money for the pantries. There is no specific place for money donations, but she and Parajon are currently figuring out a safer way to receive those donations.

That was the first time Quiñónez-Skinner and a group of volunteers hosted an event like that for the city. More than 400 people turned out for the event, when no more than 100 were expected.

The city was extremely pleased with the event turn-out and additional funding.
Quiñónez-Skinner’s GLA eventually became the official sponsor of the event.

Quiñónez-Skinner said that a sense of connection to her residential area informs her community service.