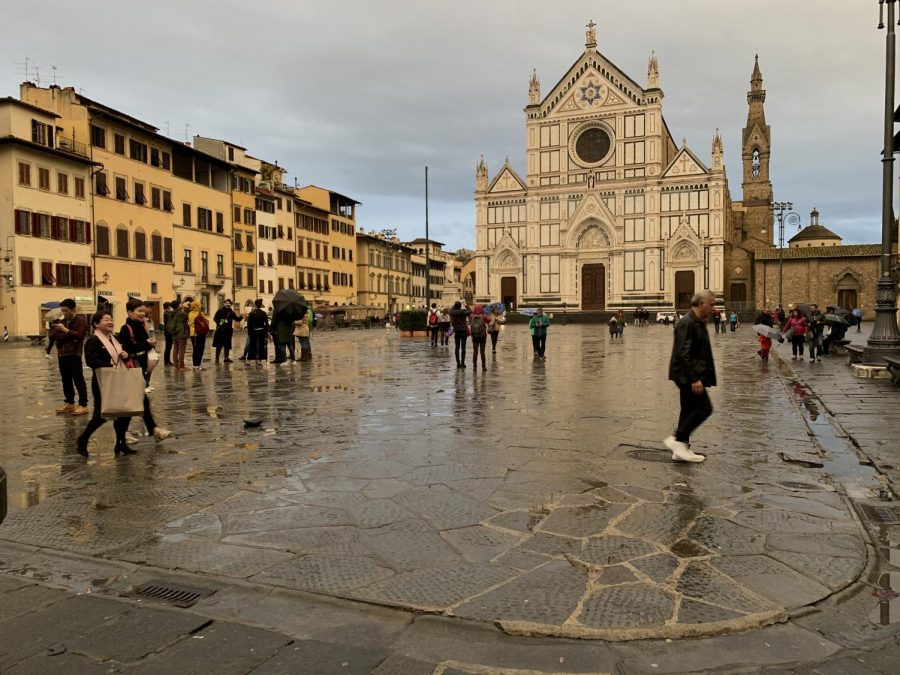 People at the Basilica of Santa Croce in Florence prior to the lockdown.

Isaac Ybarra and Thania Garcia had been living in Florence, Italy, for seven months as part of CSUN’s study abroad program before the CSU suspended the program due to the COVID-19 pandemic.

What Ybarra had hoped to be a year-long experience was cut short when students were told to return to the United States and self-isolate.

Ybarra, a CTVA major, tested negative for COVID-19, but was diagnosed with acute bronchitis at the Northridge Hospital Medical Center.

Garcia, a journalism major, had returned to the United States four days before him. She did not show symptoms upon arrival and was quarantined in her family’s home. She was not tested for COVID-19.

It took Garcia’s parents a lot of convincing to get on board with the idea of her studying in Italy in the first place.

“I am the daughter of two immigrants, so they weren’t really very keen on the idea at first,” Garcia said. “They’re very traditional Mexican parents so they didn’t really get what I was doing. I just kind of built my way up to it, and then I applied and got accepted.”

Garcia’s parents finally agreed to let her apply to the CSUN study abroad program, which would have allowed her to stay in Italy for a year.

“When I got in I was really excited,” Garcia said. “I had been wanting to go to Italy for my entire life. It was like a dream destination for me.”

The study abroad program was based in Florence, and the school was made up of different students from various CSU schools. Italian professors taught the courses.

“Students that we were studying with, a lot of people were just there to have fun,” Ybarra said. “They were travelling, that’s what made it scary.”

Ybarra said his classmates were experiencing flu-like symptoms as early as December.

“The whole school was disgustingly sick in December,” Ybarra said. “Like everybody had these flu-like symptoms that were essentially like, to me, coronavirus symptoms.”

Ybarra said that his doctor, who was responsible for caring for the students while they were abroad, did not know why so many were falling ill.

The CSU International Program organized a video call on Feb. 27 with its students in Italy to go over how to handle the ensuing weeks. By March 3, it was announced that the program was suspended and classes would be moving online. The CSU system had previously suspended the South Korea program.

“They just told us that we had to leave and a lot of students said they were really hesitant,” Garcia said.

Garcia said that her classmates were not taking the orders seriously enough.

After the CSU system suspended the program, Garcia returned to Los Angeles on March 7 to begin her quarantine at home.

Ybarra decided to stay in Italy as long as he could, because he was unsure as to whether or not LA was prepared to handle COVID-19.

“I was not trying to come back to the States,” Ybarra said. “I knew that Italy has universal healthcare. I felt safer knowing that I’d be able to get a test. I stayed longer because I’m somebody who wants to learn from mistakes. I didn’t want to leave first, I wanted to know what happened when people flew to the States, like how their experience was.”

“One of the first schools to leave was NYU,” Ybarra continued. “People were saying when they were going through airports, there was no screening, just more reasons to not want to leave.”

On March 9, Italy’s Prime Minister Giuseppe Conte announced a nationwide lockdown. Ybarra thought this meant that his trip was extended.

“I celebrated a little bit,” Ybarra said. “I was like ‘I’m here, there’s nothing they can do about it, I’m stuck!,’ then one of the faculty members contacted me.”

The next day Ybarra went back to his school, where faculty members were beginning to inform the remaining few students of the parameters of the lockdown. He was told he would have to leave the next day, on March 11. Ybarra was given an official document stating a reason for being out of his home, in case he was stopped by police enforcing the lockdown.

“That was the last day Cal State gave me to stay there,” Ybarra said. “They told me that if I stayed past that day I could be expelled from the program and my financial aid would be interrupted.”

Ybarra traveled from Florence to Copenhagen and then Seattle before landing in LA. He said that not once was he screened for fever or questioned in the airports for coming from a highly-impacted country.

When Ybarra returned to LA, he requested housing accommodations to protect his family in the event that he was an asymptomatic carrier of the virus.

CSUN agreed to let him stay in Student Housing, covering the cost of his two and a half week self-isolation, and the Klotz Student Health Center monitored Ybarra’s health for the first week.

Within three days of his return, Ybarra developed some symptoms associated with COVID-19.

“I had symptoms such as shortness of breath, my chest was tight, I had a headache, and I started to get an itch in my throat,” Ybarra said. “But I did not have a fever, I wasn’t coughing.”

The Klotz Student Health Center arranged for him to go to the Northridge Hospital Medical Center for COVID-19 testing. The university covered the cost of his testing.

Professionals from the center came to Ybarra’s dorm double-masked with protective gowns and shoe covers.

“Like E.T.,” Ybarra said. “That’s how you know it’s serious. They couldn’t take it off outside, they had to take it off inside just in case it was contaminated.”

Ybarra and one other unidentified student were picked up by an ambulance for testing on March 19.

“Three separate people questioned us, asking about our symptoms to see the severity,” Ybarra said. “To analyze whether (the test) needed to be done or not. That’s why I feel very fortunate, because I know those who are tested are those who are sickly or wealthy, (or) superstars.”

Ybarra’s nose and mouth were swabbed, and he took a blood test as well. He received his results two days after he was tested, and they came back negative. He was diagnosed with acute bronchitis.

His final day of self-isolation in student housing was on March 26.

“I think that for the way the world is and the way things are changing so quickly, I think that the school helped me the best that they could,” Ybarra said.