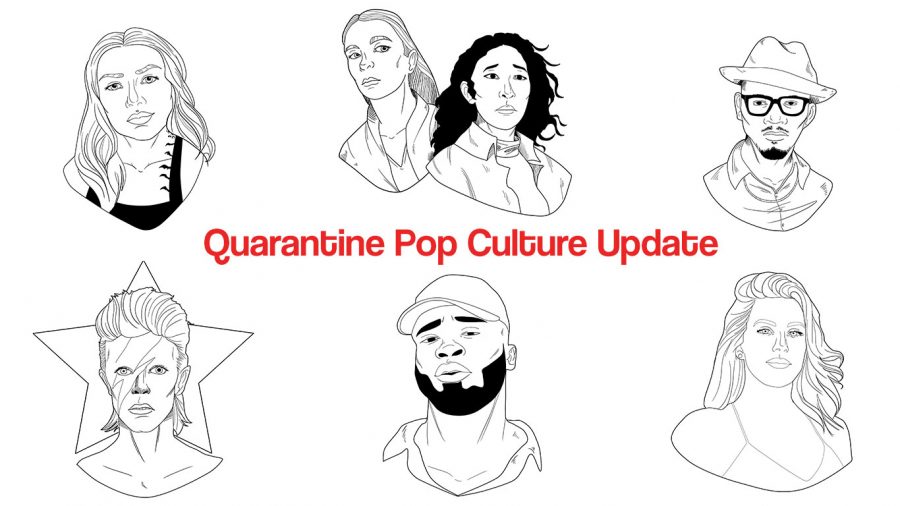 During the time of the quarantine, creators have taken over social media platforms trying to cure your boredom. With so many things happening, you may have missed a few exciting things that could really pique your interests. Here are some posts that you may have missed from this week, and a few upcoming virtual live performances this weekend.

With the start of April and the weather finally warming up and looking like springtime, new shows will be knocking on our doorsteps. HBO welcomes two shows to their Sunday lineup, aside from their massive hit show “Westworld.” Issa Rae’s critically acclaimed show “Insecure” is returning for its fourth season. “Insecure” is back in their 9 p.m. time slot, followed by the series premiere of the new HBO comedy-thriller show “Run” at 9:30 p.m.

From “Fleabag” executive producers Vicky Jones and Phoebe Waller-Bridge, “Run” stars Merritt Weaver and Domhnall Gleeson as past lovers. Weaver is a woman in a mundane cycle of life, until she receives a text from her college ex-boyfriend inviting her to stop her life and meet him in New York City to fulfil a secret pact they made 17 years prior.

Another show that made its Sunday night premiere was another brain child from Waller-Bridge: the critically acclaimed “Killing Eve.” The suspenseful-thriller show is back for its third season in the AMC’s 9 p.m. time slot.

Two big topics that are on everybody’s mind: true crime and makeup. These two things may seem like they’re on opposite ends of the spectrum, but one Los Angeles YouTuber has found a way to make them blend together. Bailey Sarian has her own video series called “Murder, Mystery, and Makeup Mondays” where she tells tales of some of the worst and most gruesome cases out there while she puts makeup on. It’s a frighteningly delightful twist to the usual “Get Ready With Me” videos that most makeup gurus are doing as of late. On the April 13 video, Sarian discussed serial killer Aileen Wuornos, whose story was the inspiration for the 2003 film “Monster,” starring Charlize Theron and Christina Ricci.

Netflix’s Black-centric Instagram “Strong Black Lead” posted an interview from their “Strong Black Legends” podcast where they interview countless Black celebrities that a lot of us know today. Ranging from Marlon Wayans, Blair Underwood and Sherri Shepherd, the podcast connects the elders and the young in the sphere that is Black Hollywood. This week, “Strong Black Lead” released several clips that were from their latest podcast episode with actor and singer Taye Diggs. Diggs discussed how he got his first movie role in “How Stella Got Her Groove Back,” how the movie “The Best Man” came to be and what his experience with a Black cast that massive was like in the late ’90s.

Pitchfork got their hands on the first clip of the David Bowie film from Variety. According to Pitchfork, the film “focuses on Bowie’s transformation into Ziggy Stardust in the early ’70s.” They also write that the film is supposed to be a depiction of how an artist really goes after what they want for their art. Writer and director Gabriel Range said in a statement, “I set out to make a film about what makes someone become an artist\; what actually drives them to make their art.” The clip shows Johnny Glynn as the titular figure and Marc Maron as Ron Oberman, Bowie’s publicist. The film itself was supposed to premiere at the Tribeca Film Festival, which has now been postponed.

Noisey’s Instagram page posted a fun video with Kojey Radical, a British rapper/writer. The video, coming in at three minutes and 47 seconds, discusses the worst parts of gentrification, Kojey’s near death experience from childhood, and what he thinks is the best way to smoke weed. It’s a hilarious clip for a day that can be riddled with monotony.

Coming up, Ellie Goulding — songstress known for her songs “Lights,” “Burn” and “Love Me Like You Do” — will be participating in a global event called “One World: Together at Home” on Saturday, April 18. It was curated in collaboration with Lady Gaga and will be hosted by Jimmy Fallon, Jimmy Kimmel and Stephen Colbert. It will feature artists such as Lizzo, Stevie Wonder, Billie Eilish, John Legend and Sir Paul McCartney.