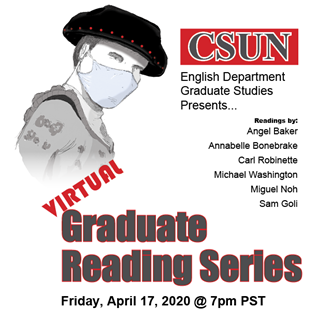 The Graduate Reading Series, a tradition for CSUN’s English department, went virtual on Friday night for the first time in the event’s history.

The Zoom-format reading brought 45 attendees, including families of the readers and members of the English department. English professor Leilani Hall was in attendance, and Carl Robinette moderated the reading.

In addition to moderating, Robinette read some of his poems, which were inspired by living in Los Angeles.

“The personal reason I’m fascinated with LA is because I moved here in my early 20s, and as a teenager I was desperate to move here,” Robinette said. “When I got here, it clicked. I came here and immediately I felt part of this place more than any other place I lived.”

Fellow poets Miguel Noh, Angel Baker and Annabelle Bonebrake shared their pieces during the reading. Expressing creative liberties in their poems posed to be a challenge in the online format for a couple of the poets.

“I feel that’s part of the poem in a way, where you are seeing it visually and it brings more in terms of context or more in terms of meaning to these poems,” Noh said. “A lot of these symbols that we might not necessarily use in daily life, how do you read them in a poem? I would say that’s definitely a challenge from my poetry to go from one medium, which is visual, to much more of an auditory state.”

Noh uses symbols, such as plus and minus symbols, throughout his work. Readers being able to see the visual format of his poems is essential to understanding his experimental style.

“It is highly experimental, sometimes it works, sometimes it doesn’t,” Noh said. “But I feel like if we have a whole keyboard to use, we can go ahead and use it.”

The shape of a poem can be another visual element for the reader. Although the Zoom audience didn’t get to see the text of the poems, poets like Baker don’t believe it to be too much of an issue when it comes to deriving meaning from her poems.

Baker’s poem, “Neglect Grew Into a Koi Pond,” was written to have the text make up the shape of a swimming pool with a fish in the middle.
“It can’t only be the shape,” Baker said. “There has to be content, there has to be some merit or discovery in the poem on its own, otherwise it doesn’t really earn the right to be a cool shape. That’s always my goal, is to make the content suit the form, not the other way around.”

Bonebrake is currently working on a series that she describes to be about “the sky going missing,” and has found that although COVID-19 is changing the lives of many, people noticing the world around them may help them better understand her poems.

“They took on a new form when we all had our lives change so dramatically, having to be inside but also many people spending a lot more time outside than they were before,” Bonebrake said. “I think that some of the themes are becoming more relevant than I expected.”

Goli read a portion of a vignette of their life, recounting specific moments of their childhood and examining their sense of identity.

“Some of it is personal, some of it has to do with my family, where we come from,” Goli said. “Throughout the whole thing so far is this question of ‘Who am I?’ and what does it even mean to ask ‘Who am I?’ and then questioning the nature of memory. To me, that’s the throughline.”

Washington read a personal essay, “Master of None,” about his transition from undergraduate to graduate studies, his frustrations and personal competition with classmates, and how things shifted since he became a graduate student.

“I kinda wanted to revisit some lessons learned in my time in the (master’s) program, and I wanted to dig into what I thought going into this world,” Washington said. “My attitude is almost looking back in hindsight on what I thought was going to happen, what actually happened, and what is happening because I’m not done just yet.”

This year’s virtual Graduate Reading Series brings up the larger perspective of what it’s like to be a creative during the time of COVID-19, often relying on motivation and being a self-starter.

Baker, motivated to use this time to add to her collection of poems, had a hard time finding inspiration outside of COVID-19.

“I’m super motivated with a little bit of a block,” said Baker. “Because when I sit down to write, most of what comes up is related to what’s going on right now. There’s just this overwhelming presence of this invisible enemy, so for me it has been particularly challenging to write about something else.”

Baker believes it’s important to remember that this situation is only temporary, and offers advice to fellow writers and creatives during these challenging times.

“Keep reaching out to other creatives and then go back to those tried-and-true sources of inspiration that used to work for you, because they’re still there and you’re still you,” Baker said. “Don’t put so much pressure on yourself. This is a month, this is a blip on the radar of human existence, so in the grand scheme of things taking one month to be worried or taking one month to do something else isn’t going to hurt your career.”

Washington had thought more time at home would mean more time spent working on his craft and developing his writing. However, he’s found that up until recently, he had not been able to start working on that goal.
“Only a handful of people, I think, have been able to salvage this time and make it work for them,” said Washington. “I’m not one of those people. A month into the quarantine, and only this week I’ve actually sat down and generated a ton of work. Events like this, I think definitely light a fire under us and give us a reason to stop fixating on the spookiness that’s going on outside and spend some time in our own heads and actually make something. Putting on events like this has been really helpful.”