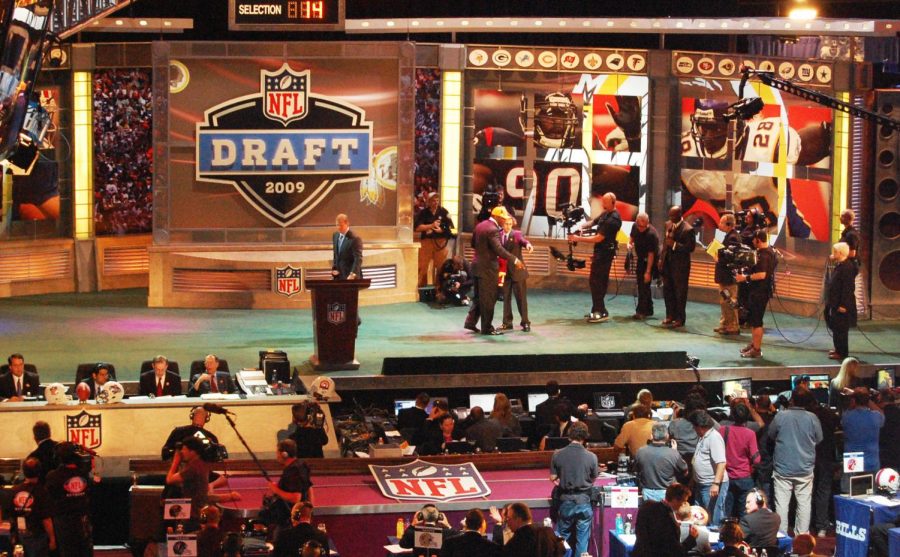 The 85th annual NFL Draft is scheduled to be held from April 23-25. The original plan was to hold the event live in Las Vegas before all public events were canceled due to the COVID-19 pandemic. Instead, all team selections will now take place via videoconferencing. The Cincinnati Bengals have the No. 1 overall pick in the draft. NFL commissioner Roger Goodell will announce all of the first-round picks from his home in New York.

Many draft analysts have said this is a deep quarterbacks and wide receivers draft. There is a possibility that five quarterbacks will go in the first round as well as four receivers.

Here are five of the top prospects on offense and five on defense:

Unless something insane happens on April 23, Burrow will be the first player drafted. He had one of the best college seasons ever this past year throwing for 5,600 yards and 60 touchdowns, the most in a single season in NCAA FBS history. With the Bengals seemingly ready to move on from Andy Dalton, Burrow will likely start day one. There is some debate on whether or not he is the best overall quarterback in the draft with Tua Tagovailoa and Justin Herbert behind him, but with his accuracy, toughness and stats, it is hard to argue.

With as many as five receivers potentially being taken in round one, it’s easy to say this class of receivers is stacked. After posting 1,208 yards and 14 touchdowns in 2019 and being an explosive route runner, Lamb is arguably the best receiver in the draft and will likely be a top 10 pick. The New York Jets is the team that Lamb is being attached to and is a much needed position for them. Lamb is built like a No. 1 receiver and if he continues to develop, he will be around for a long time.

With all of the mock drafts, Taylor has bounced back and forth from a first-round pick to a second-round pick. He really opened scouts’ eyes at the NFL combine after he ran a 4.39 in the 40-yard dash. Taylor finished his college career as the No. 6 all-time rusher and the first player in history to rush for more than 6,000 yards in a three-year span. Taylor is a three-down back who runs hard. With the revolving door of running backs in the NFL, Taylor should get work this upcoming season.

There are three offensive tackles that can be drafted in round one and Wills should be the first one taken. He played right tackle in college, blocking the blindside for Tagovailoa. Wills can play right or left and will be a day one starter. He is a strong run blocker and an agile pass blocker. Wills has been linked to the Arizona Cardinals, where he will be protecting quarterback Kyler Murray this season if the projections come to fruition.

Last year’s draft saw 16 tight ends drafted with two going in the first round. This year’s group of tight ends will most likely not get a call until late day two. The best tight end of this year’s draft is a toss-up, however, Kmet out of Notre Dame is one of the best tight ends. If Kmet can work on his blocking to pair with his already excellent receiving ability, he will be a dominant threat in most NFL offenses.

Chase Young is by far and away the best football player in this year’s draft and if it was any other year, he would be the first overall pick. Young had 16.5 sacks last year and 46 tackles in only 12 games. He was also only the ninth defensive player since 1982 to be nominated for the Heisman Trophy. Young will be a dominant edge rusher for many years in the NFL and has already been compared to Khalil Mack and the Bosa brothers. Young will most likely be drafted to the Washington Redskins with the second pick.

Simmons is a freak of an athlete. His versatility is something to see. He played at linebacker, defensive end, cornerback, and safety while at Clemson and racked up 104 tackles, seven sacks, 16.5 tackles for loss, and three interceptions during his final college season. Simmons is going to be a game-changer to whichever team takes him. With so many teams needing offensive players in the first few picks, Simmons might fall right in the arms of the Carolina Panthers, who are in need of a linebacker with the early retirement of Luke Kuechly.

Only two cornerbacks have gone within the first five picks the past four drafts, Jalen Ramsey and Denzel Ward. Okudah could join that club. The Detroit Lions are linked to Okudah and need a corner since they traded Darius Slay away. Okudah is a big corner who will handle physical receivers and is quick enough to be a shutdown corner. He was also a finalist for the Jim Thorpe Award.

Brown could have been a first rounder last year but decided to return to Auburn and got even better. He is an overwhelming force upfront on the defensive line. His size, strength and quickness for a man his size will make him a problem for years in the NFL. He has a nonstop motor, and at times seems unblockable. Comparisons to Ndamukong Suh have been thrown out there. Brown has been linked to the New York Giants and the Carolina Panthers.

McKinney is the best safety in the draft this year. He can stop the run and he can drop back into coverage. He is a ball hawk and very versatile player. McKinney finished his 2019 season at Alabama with 95 tackles, three sacks and four forced fumbles. He has been linked to the Dallas Cowboys and draws comparisons to Minkah Fitzpatrick.