Familiar faces from the Valley in NFL Draft 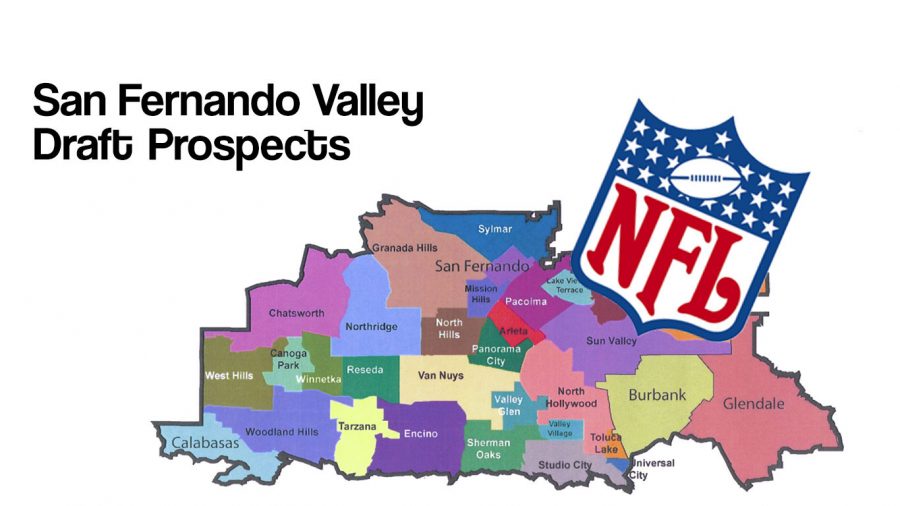 The San Fernando Valley has long been a hotbed for football talent in California. From Clay Matthews and Malik Jackson, to Michael Thomas and Malcolm Smith, several future NFL stars have called the Valley their home at one point or another. This year’s NFL Draft class is no exception as there are four prospects who have 818 ties, or at least close proximity to it, and hope to hear their names called by Commissioner Roger Goodell this weekend.

Pittman was as highly-touted as he came out of high school. The Woodland Hills native was a four-star recruit and rated as the eighth-best wide receiver in the country and ninth-best player in the state of California, before he committed to USC.

At USC, Pittman consistently produced both as a receiver and kick returner. He caught 171 passes (12th all-time in school history) in four years as a Trojan for 2,519 yards and 19 touchdowns. He was a finalist for the 2019 Biletnikoff Award, which is awarded to the nation’s top receiver. Pittman was also named second team All-American by the Associated Press, Football Coaches, Football Writers, Walter Camp, CBS Sports, The Athletic, and Phil Steele.

This year’s draft class is deep with receivers, and Pittman’s stock has taken a slight hit as a result. He has been projected to go anywhere between late in the first round or the second. ESPN draft analyst Mel Kiper Jr. predicts Pittman will be selected by the Miami Dolphins with the 56th pick, while his colleague Todd McShay has Pittman going 34th to the Indianapolis Colts. Kiper currently ranks Pittman as the sixth-best receiver available in the draft.

Darnay Holmes / Calabasas High School, Class of 2017
(Yes, he’s from Pasadena but he still counts since he played four years in the Valley.)

Holmes came out of Calabasas as a five-star recruit, ranked as the 13th best player in the nation and third-best cornerback in the nation by Scout.com. As a result, he was coveted by several programs such as USC, Ohio State and Nebraska. He ultimately committed to UCLA, which led to this hilarious reaction by his nephew.
His explosiveness, speed, pure athleticism and ability to play on both sides of the ball drew comparisons to former USC star Adoree’ Jackson. Holmes caught 69 passes for 1,214 yards and 14 touchdowns for Calabasas as a senior. Defensively, he made 30 tackles.

At UCLA, Holmes settled in as a defensive back, started 11 games as a freshman, and led the Bruins with three interceptions. Holmes played in 35 games over his three-year college career, in which he made 121 total tackles, three tackles for loss, eight interceptions, 28 passes defended and two forced fumbles. He also scored three career touchdowns as a Bruin.

Kiper has Holmes ranked as the No. 15 cornerback in the draft and he is projected as a third or fourth round pick by NFL.com.

Parkinson was a two-sport star at Oaks Christian (football and basketball), a five-star recruit by 247Sports and PrepStar, came out of high school as the nation’s top-ranked tight end, and chose Stanford over offers from Alabama, Georgia, Arkansas, and Cal.

Parkinson caught 87 receptions for 1,171 yards and 12 touchdowns over his three-year tenure in Palo Alto. In 2019, he was named second team All-Pac-12 and was a semi-finalist for the John Mackey Award, which is given to the nation’s top tight end. He had 48 receptions for 589 yards and one touchdown as a junior, and also threw a touchdown pass.

Kiper ranks Parkinson as the No. 11 tight end on his big board and has projected him to be picked in the fourth or fifth round.

Compared to the other athletes mentioned here, Kelley wasn’t nearly as heralded as a high schooler, signing with UC Davis as a two-star recruit.

Kelley put up numbers at Eastside, which foreshadowed his impressive college career. He rushed for 1,469 yards and 16 touchdowns as a senior in 2014, where he had six 100-yard games. Kelley also had 19 receptions for 352 yards and six touchdowns to go along with his rushing totals. He left Eastside with 3,400 career all-purpose yards.

After playing the first two seasons of college football at UC Davis, Kelley decided to transfer to UCLA after the 2016 season. After redshirting in 2017, Kelley took off from there. He rushed for 1,243 yards (10th all-time in school history) in 2018 and 1,060 yards (20th in school history) in 2019, and became the eighth Bruin to rush for 1,000 yards in back-to-back seasons. Kelley finished his college career ranked 14th on UCLA’s all-time rushing list and 11th on the school’s all-time touchdowns list en route to being named first team All-Pac-12. He was also named UCLA’s Most Valuable Player at their team banquet after the season concluded.

Kelley is ranked ninth among running backs on Kiper’s big board and is projected as a fifth round pick by NFL.com.