Families in San Fernando line up to receive COVID-19 resources 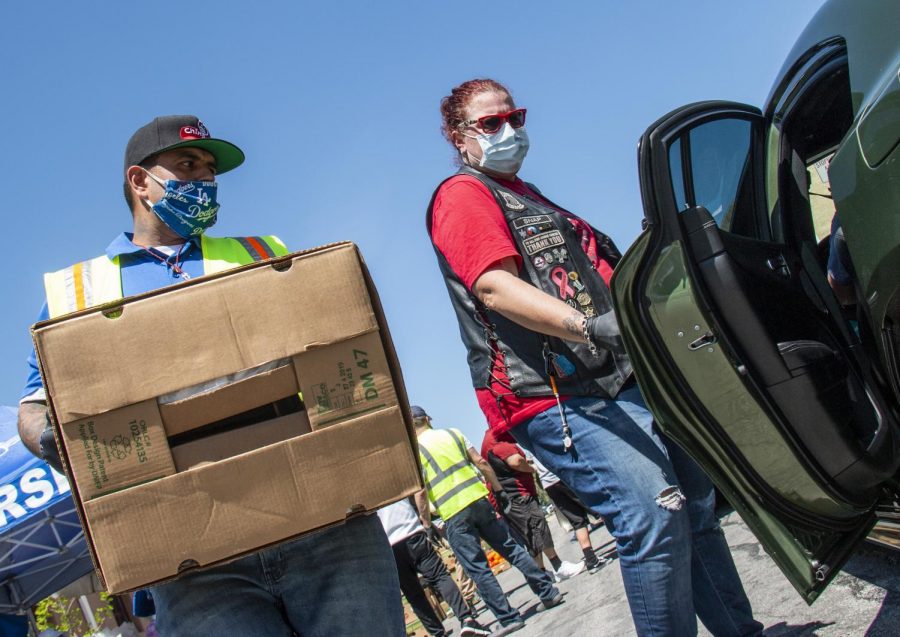 Volunteers load up boxes of fruit and non-perishable foods on April 23 for anyone who waited in line, no questions asked. The food drive was organized by The Wild Horse Children’s Foundation, LA Regional Food Bank, Magaly’s Tamales and Mexican Grill restaurant, and The Knotted Apron to provide families during the COVID-19 pandemic.

Eight seconds. That’s how long it took volunteers to open and load vehicles with boxes full of fresh fruit, rice, oatmeal and pasta for a food distribution drive in the city of San Fernando.

Today, hundreds of vehicles lined around every block, waiting to get to the food drive tents on Second Street. Volunteers handed out boxes of food with a drive thru system to prevent large crowds from gathering. Despite the huge turnout, every vehicle was loaded with products within a minute of driving into the food drive.

The food drive was in partnership with The Wild Horse Children’s Foundation, a nonprofit organization founded by professional MLB player Yasiel Puig, Los Angeles Regional Food Bank, Magaly’s Tamales and Mexican Grill restaurant and The Knotted Apron to provide for families during the COVID-19 pandemic.

Executive Director of Wild Horse Children’s Foundation Lisette Carnet said they have been preparing for the food drive for two weeks and have gathered food, supplies and meals from Magaly’s Tamales and Mexican Grill.

“We plan to feed over 1,000 families today. We were supposed to start at 11, but because the line was so backed up with over 200 cars already, we had to start earlier,” Carnet said. “No questions asked, so anyone who comes by is able to drive by and get a box. We’re trying to get everyone through quickly and safely.”

Actor Danny Trejo stopped by the food drive wearing gloves and a mask, to help load boxes of food for the vehicles in line.

“Our community is so together that anytime there’s a function especially like this, everybody’s here, everyone I know is here, we all come together,” Trejo said. “Nurses and doctors you are our angels, God bless you.”

President of Magaly’s Tamales and Mexican Grill, Magaly Colelli, mentioned the work that goes into an operation like this.

“We’ve been preparing since last week but just yesterday, we started bringing in all the fruit and filling up all the boxes,” Colelli said. “We got oranges and tortillas this morning and we’ve been preparing burritos to give out to the community, so it’s been a week of preparation.”

Magaly’s employees and chefs from Knotted Apron were wrapping rice, bean and cheese burritos that were included in the boxes that were given out. Everyone was contributing in any way they could.

“We’re here to help the community, we helped wrap up some burritos and brought them to the public and we’re here helping them out,” said Mission Foods’ area sales manager Manny Rosas, who handles product sales in the San Fernando Valley as well as Simi Valley.

A volunteer from North Hollywood, Cristina Molina, had been at the event since 7:30 a.m. She took a break from guiding vehicles to drink some water inside Magaly’s. Molina mentioned how much she enjoys attending events hosted by Carnet that help the community.

“Anytime they have an event, they can count on me to be here, because it means a lot to me what they’re doing,” Molina said. “We packed boxes, and we’ve been giving them out and keeping the cars moving and trying to keep everyone moving smoothly so we can get as many cars as possible. We’re trying to hit 1,000 families today.”

Colelli said while the food drive was strictly a drive thru pick up, to maintain social distance and prevent large gatherings, multiple residents walked in the restaurant asking for food and she said those without vehicles were able to stop by later in the afternoon to pick up a box of non-perishable items.