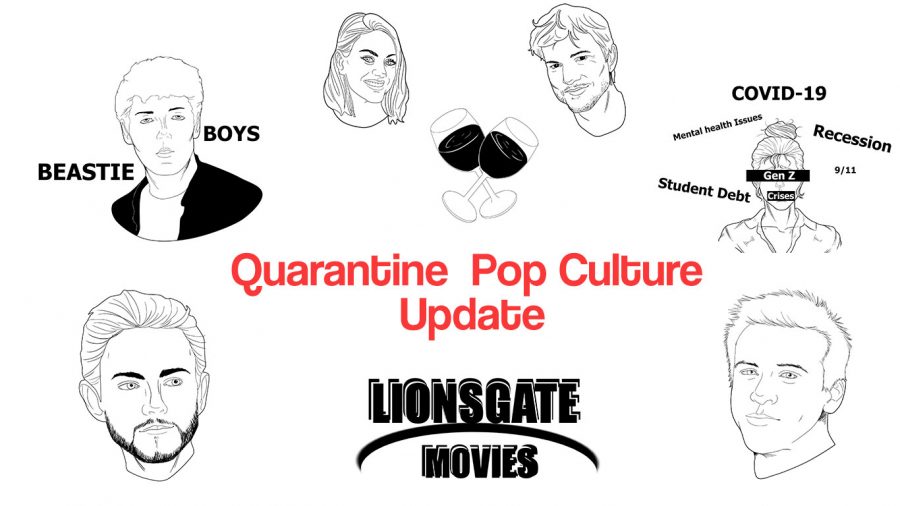 During the time of quarantine amidst the COVID-19 pandemic, creators have taken over social media platforms trying to cure your boredom. With so many things happening, you may have missed a few exciting things that could really pique your interests. Here are some posts that you may have missed from this week, and a few upcoming virtual live performances this weekend.

On Sunday, well-known “That 70’s Show” couple Ashton Kutcher and Mila Kunis were trending on Twitter because of a new wine that they started together. The couple’s wine is adequately named “Quarantine Wine.” As the picture from Kutcher’s Instagram states, it’ll be a “wine with an impact.” 100% of the proceeds will be going to COVID-19 relief efforts.

In the new Beastie Boys group documentary “Beastie Boys Story,” director Spike Jonze follows the two remaining Beastie Boys, Adam “Ad-Rock” Horovitz and Michael “Mike D” Diamond, around at the Kings Theatre in Brooklyn as they visually tell their 2018 memoir to a room of 3,000 fans. As Pitchfork’s review states, “Essentially, it’s one long Lifetime Achievement Award that they hand out to themselves, and watching their youthful irreverence stiffening into middle-aged reverence is a bit sad.” The documentary debuts on AppleTV+ on April 24.

In an article written by Ryan Brooks, Buzzfeed News takes a look at the COVID-19 pandemic through the eyes of Generation Z. As Brooks starts off the article saying, “Gia W. realized things weren’t going well when she was kicked out of the office in the middle of a job interview. The entire building was shutting down because of the coronavirus pandemic. That surreal experience is just the literal version of what thousands and thousands in Gen Z are experiencing in real time: a sudden stop to their lives just when they’re beginning.” The article put it best when it gave Generation Z another name: Generation Freefall.

Aside from the concert live streams that are oversaturating our lives right now, some outlets have decided to stream movies and allow viewers to have a cozy night in watching nostalgic movies to escape the ugly side of the world and what’s going on in the world today. The production company Lionsgate is conducting Friday movie nights called “Lionsgate Live: A Night at the Movies.” This Friday, April 24, they’ll be showing the ’80s classic, “Dirty Dancing.” Next Friday, May 1, they’ll be showing “La La Land,” and on Friday, May 8, the first “John Wick” movie.

Lionsgate livestreams the movies on YouTube at 6 p.m. PST.

Grammy-award winning artist Zedd, who is responsible for a lot of pop songs like “Clarity,” “Break Free” and “The Middle,” has posted teasers on his Instagram story and Twitter about his upcoming event that will be live streamed on Twitch, Saturday, April 25.